Egyptian activists lament the lack of progress since the clashes of November 2011. 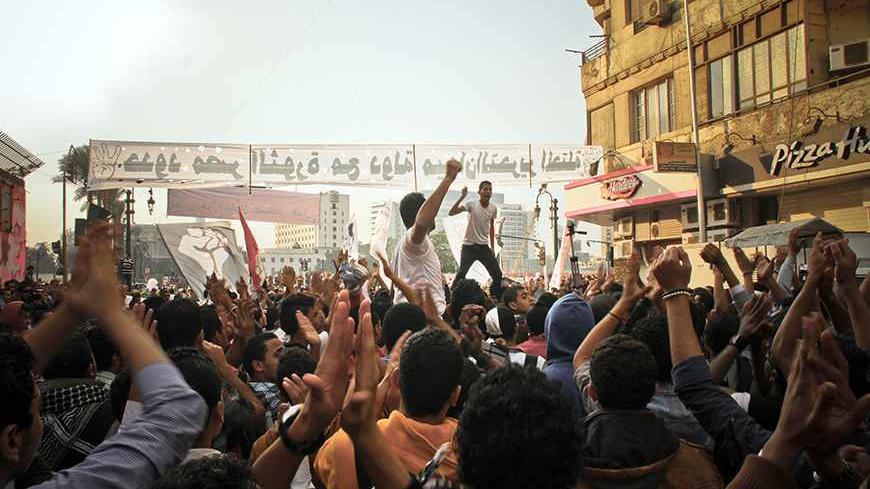 CAIRO — It’s been two years since Mostafa, 22, heard a police officer growl, “Die, you son of a bitch,” before shooting, spraying shotgun pellets deep into his right thigh, tearing away at skin, nerves and muscle.

A rubber bullet grazed the back of his scalp as he fell into an alley off Mohamed Mahmoud Street. He was lifted into an ambulance with five other bodies, some dead.

At the hospital, he screamed in agony while a doctor scooped pellets out of the meaty wound. His best friend, Amr, 21, was there too, but in the morgue — one of more than 40 who died in clashes with police and soldiers in a weeklong street battle.

The clashes of November 2011 were a turning point that foretold a violent shift in battles to come. A face-off during which police and military officers blasted repeated rounds of tear gas and aimed for the head and chest with live ammunition, shooting to maim or kill, was “unprecedented in the level of violence” back then, said Magda Boutros, then-director of criminal justice reform at the Egyptian Initiative for Personal Rights.

Two years into the revolution — with two toppled presidents each facing trial for complicity in killing protesters — another record was set in August when about 1,000 Muslim Brotherhood supporters protesting the ouster of President Mohammed Morsi were killed, the worst mass killing in Egypt’s modern history.

Today, Egypt is again ruled by a military government. The constitution is being redrafted for the second time in two years. Candidates are preparing for a redo of parliamentary and presidential elections. And both the military and the Muslim Brotherhood are trying to rebrand their roles in Mohamed Mahmoud — stirring the rage of activists who had vowed to “never forget” the police and army’s brutality, and the Muslim Brotherhood’s indifference.

A day before the anniversary, activists spray-painted a government-constructed stone memorial for “martyrs” in Tahrir Square 12 hours after it was completed and hung banners nearby, declaring, “Entry Forbidden for Traitors: Remnants of Mubarak’s Regime and the Brotherhood.” On Nov. 19, they clashed with supporters of military leader Gen. Abdel Fattah al-Sisi in Tahrir. Rocks were thrown, and police fired tear gas.

“Nothing has changed,” Mostafa said, a line he’s repeated so often over the past two years it has become habit.

To reach Mohamed Mahmoud Street, which juts into Tahrir from the east, Mostafa rides the metro for 40 minutes from Helwan, a working-class suburb south of Cairo.

He graduated from Cairo University last spring, hobbling to his final exams on crutches. Hair no longer grows over the bullet scar on his scalp. And the groove of puckered flesh and missing muscle on his thigh pains him when he stands for long.

“I could have another surgery, but I leave it for memory,” Mostafa said. The wound is a martyr mural imprinted on flesh, a daily reminder that his friend’s killer hasn’t been prosecuted, and thus he is still seeking justice.

They had gone to Tahrir and Mohamed Mahmoud to act on their ideals, Mostafa said. “Me and my generation, we love freedom, we don't accept oppression. I lived my life with injustice, suppression and corruption. We wanted to live a good life, to have a bright future,” he said.

Any glimmer of hope had dulled in the months following the 18-day uprising, punctuated by military trials for thousands of civilians, and the stalling of the ruling Security Council of the Armed Forces (SCAF) in setting a date for presidential elections.

In November, small numbers were camping in Tahrir, seeking retribution for injuries they suffered in the spring. When security forces tried to break up the sit-in on Nov. 19, tensions boiled over. Thousands descended on the streets around Tahrir. Fires burned, pavement and walls were broken into rock and motorcycles delivered the wounded to ambulances.

On Nov. 21, Amr, a junior at Cairo University, checked his Facebook feed. He saw a baking soda recipe said to alleviate the sting of tear gas and asked his mom to make it. And he asked Ahmed, 20, his younger brother, to borrow his helmet.

But Amr left, assuring his family he’d be fine, as he always did en route to Tahrir.

Sometime after 10 p.m., his father called Amr. A stranger picked up. He told him to rush to Kasr El Aini Hospital. There, they found Amr in the morgue. He’d been shot in the left eye. On his death certificate, it said he had died of “laceration of the brain.”

In shock, they took a cell phone photo of Amr’s bloodied head wrapped in gauze.

While Amr’s family mourned, the standoff on Mohamed Mahmoud pushed army generals to schedule presidential elections that would remove them from power. Around 3,000 were injured. A video was circulated of soldiers piling dead bodies atop garbage.

“These young people are the reason for changing the government,” Amr’s father said at the time. “They should be recognized and lionized, not killed and called 'thugs.'”

“Thugs” was the label on the lips of the military regime lead by Field Marshal Hussein Tantawi. When Morsi became president, he replaced Mohamed Hussein Tantawi with Sisi — the man who would lead his ouster and is now being urged by some to run for president.

Tantawi reappeared recently on television, seated alongside Sisi at a celebration of the army’s October War. That day, the Muslim Brotherhood clashed with security forces in Ramses Square, while fireworks crackled over Tahrir during a state-sponsored concert.

Mostafa and his friends stayed home, as did all other marginalized protest camps.

“Nothing has changed,” he said.

A fresh mural appeared in Tahrir at the corner with Mohamed Mahmoud Street.

It’s an angelic depiction of activist “Gika,” Gaber Salah, 16 — killed during clashes on last year’s anniversary. He’s painted with a peaceful smile, a black Afro, white wings and a red Superman shirt with the letter “G.” His arms are stretched wide.

Amr’s mural was painted around the corner last year, on a wall layered with mournful stories of the human impact of politics. It was an oddly colorful depiction of his wounded head, next to a bright portrait of the smashed head of Khaled Saeed, whose brutal death from a police beating in June 2010 sparked a Facebook movement pushing for a revolution.

Mostafa paused for a photo by Amr’s mural last anniversary, then shook his head.

On Nov. 18, the wall had been entirely painted over with a red and pink camouflage design meant to represent the blood on the hands of the army. Some Sisi supporters showed up in Tahrir, chanting for the army and police. Nov. 19 is also Sisi’s birthday.

Despite the clashes, Mostafa plans to leave work to spray-paint Amr’s image on the walls of Mohamed Mahmoud with friends, as they did when he died.

And on Nov. 21, they plan to travel to the cemetery, to visit their friend.

That will never change, they say.

Shadi Rahimi is a journalist based in Cairo. She is filming a documentary about the lives of Mostafa, his friends and events since Mohamed Mahmoud, “Boys of the Bullet.”