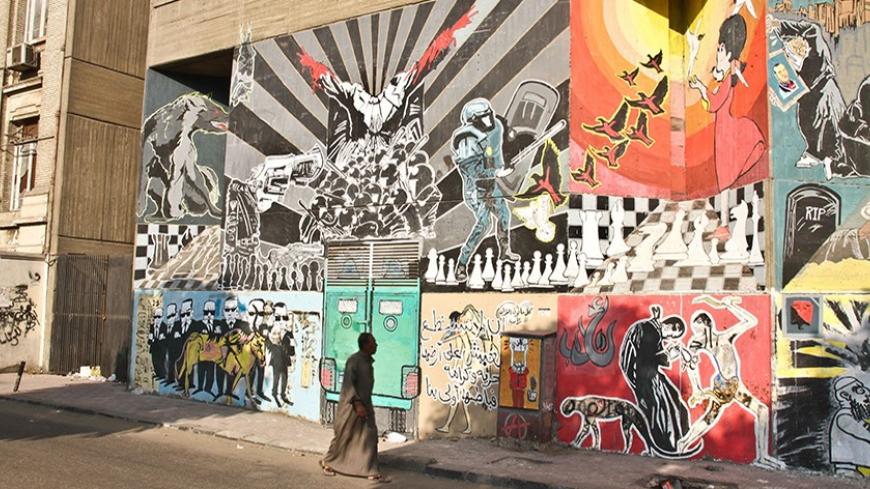 A view of graffiti on an alley off Mohamed Mahmoud Street in Cairo just off Tahrir Square, Aug. 22, 2013. - Shadi Rahimi
Shadi Rahimi
@shadirahimi
May 20, 2014

CAIRO — His face is on posters, shirts, cupcakes and now campaign banners and billboards across the country. The image of Egypt’s next likely president, ex-army chief Abdel Fattah al-Sisi, was iconized well before he declared his candidacy by propagandists, opportunists and supporters soon after he led the military ouster of President Mohammed Morsi last summer amid the nationalist fervor sweeping the country.

At the same time, the art form of graffiti was providing a counternarrative — that of the bloodshed following Morsi’s removal. “Sisi is a killer” was sprayed by supporters of Morsi and the Muslim Brotherhood across Cairo, and remains on walls even near the presidential palace. A few of Sisi’s billboards feature a splash of blood-red paint across his face, presumably splattered by his detractors.

In a parallel vein, more delicately crafted murals by established street artists also allude to the ills of Sisi and the interim military-backed government he installed before swapping his defense minister title for presidential candidate. Along the prolific informal gallery of Mohamed Mahmoud Street in downtown Cairo, a soldier grips a back-slung rifle amid piles of skulls, blood dripping from his mouth. The image, titled “The Army Above All,” was created by artist Mohamed Fahmy, also known as Ganzeer. 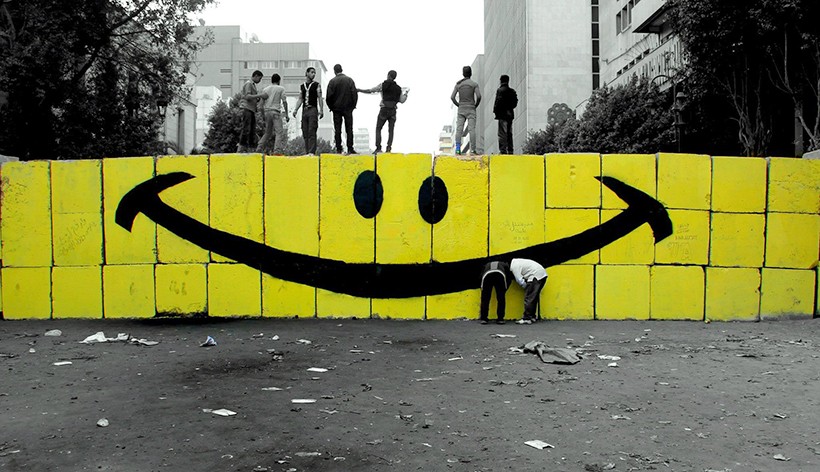 Landing May 7 on a Huffington Post list of global street artists “shaking up public art,” Ganzeer has of late also caught the eye of state-leaning Egyptian media, which is wrongly accusing him of being a member of the banned Muslim Brotherhood, a dangerous allegation as the group is now deemed a terror organization. On his May 9 show “Al Raees Wel Nas” (The President and The People), TV personality Osama Kamal made the claim echoed by major newspapers Youm 7, which is privately owned, and Al Gomhuria, which is run by the state.

Ganzeer, who has also created artwork critical of the Brotherhood and Morsi, is denying the accusations, firing back in a statement titled, “Who’s Afraid of Art?”

“Those accused of being affiliated with the Brotherhood are being sentenced to death in mass trials,” he wrote. “These are very serious accusations, ones that should not be thrown around so lightly.”

The unfounded claims come amid a campaign that Ganzeer and other Egyptians began with European, American and North African artists to critique Sisi and challenge the nationalistic attitudes backing government crackdowns. Ganzeer has declined interview requests since the accusations, but fellow artists told Al-Monitor they fear for his safety while persisting with their campaign, “Sisi War Crimes.”

“What Sisi needs to begin to understand is that a larger audience is now watching his every move,” Ganzeer’s Finnish counterpart, street artist Sampsa, told Al-Monitor. “We'll keep going until politicians begin discussing the facts of the Rabia massacre, Sisi's role and the fate of Egypt under his rule.”

A deadly quashing of dissent followed Morsi’s popularly backed ouster, with the killing and sweeping arrests of his supporters and the jailing of activists and journalists. Sampsa was sitting alongside Ganzeer in Helsinki last Aug. 14 when news broke of what would be the worst mass killing in modern Egyptian history, during the dispersal of the pro-Morsi Rabia al-Adawiya and Al-Nahda encampments.

“We sat watching YouTube clips of Egyptians getting murdered,” said Sampsa. “After witnessing Ganzeer’s profound sadness at not being home and feeling helpless — this touched me in a way that would be difficult to describe in words.”

So he used art instead: graffiti in Brooklyn, of a young Egyptian man shot dead as he stood holding peace signs, and white outlines on pavement doused in red, representing dead bodies, in Paris.

A pedestrian walks through one of Sampsa's installations in Paris.

In Finland, Sampsa had helped push for change in copyright laws by using street art. Such action “could be replicated elsewhere,” he said. “Egyptian street artists specifically know the power of the street and art.”

In 2011, as protests swelled into an uprising that would topple former President Hosni Mubarak, “almost every event that happened was mirrored on the streets with art,” said Basma Hamdy, co-author of the leading tome on Egyptian graffiti, “Walls of Freedom,” documenting its rise since Jan. 25, 2011.

Street art is a powerful political weapon that quickly became “the voice of Egyptians,” said Hamdy. It was the “people‘s newspaper” with a particularly subversive edge, said Karl. “Some messages were really dangerous, because they told stories that the state, the military or the police wanted to cover up.” 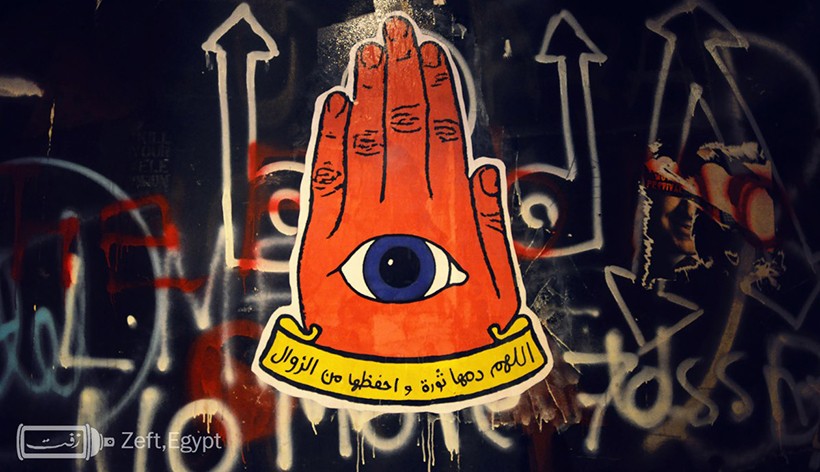 Soon after the government drafted a law against "abusive graffiti," a few months after Morsi’s ouster, street artists adapted by working more carefully, painting while keeping an eye on potential threats. But that was nothing new; Ganzeer was arrested briefly in 2011 for hanging anti-Supreme Council of the Armed Forces posters. In 2012, Ganzeer and artist Ammar Abo Bakr found a crowd gathering as they were crafting a mural based on a photograph taken in Alexandria of two military police officers dragging away a man.

Ganzeer blogged about the angry reaction of a bystander, who demanded, “Erase it now!”

“Why do you want to blind people from the truth, I ask? Let them see it, go home and think about it,” Ganzeer had responded, to which the man screamed, “We want to stay blinded. We’re a nation of sons of bitches, okay?”

“OK, I say,” Ganzeer wrote. “And we pick up our things and leave, as hordes of people rush to deface the incomplete mural.”

Street artists in Egypt have always been “extremely brave,” said Hamdy, even painting on the front lines of clashes, enveloped in tear gas. But since Morsi’s ouster, “Artists have to be very careful,” said Karl. The smear campaign against Ganzeer is the latest attempt to create a divide in the public, said Hamdy.

“It’s well-known political fearmongering,” she said. Artists “are aware this is happening and are prepared for it. They will continue to express themselves. I don't believe you can stop them.” 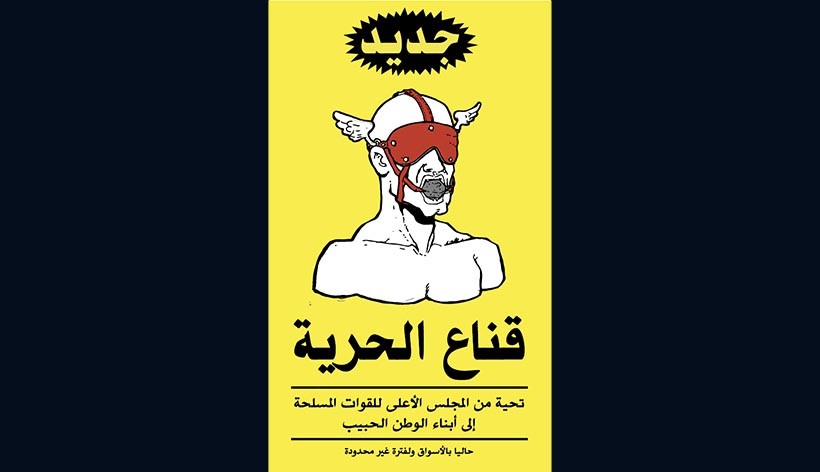 This poster by Ganzeer reads “New … The freedom mask. Greetings from the Supreme Council of the Armed Forces to the beloved people. Now available in the market for an unlimited time,” May 2011.

Pointing to this month’s elections, which Sisi is expected to sweep, government officials maintain Egypt is moving ahead with its political road map to democracy, and that clampdowns are necessary to confront the deadly militant attacks against the army and police since Morsi was removed. Sisi’s promise to restore security and his strong stance against the Brotherhood are driving forces behind his widespread support.

Meanwhile, artists are continuing to spotlight violations along the transitional path.

On May 19, Sampsa created his latest work for the #SisiWarCrimes campaign in a Paris studio. The piece, which he aims to send to artists in Cairo to paste on public walls, is a depiction of Sisi, grinning widely with gold teeth and wearing a Napoleon hat, a Metallica 1983 “Kill Em All” tour shirt and big yellow Mickey Mouse shoes. Below his feet are the words in Disney lettering, “Military Coup.”