The Mohamed Mahmoud Street protests mark the first attempt by nonpartisan revolutionaries to reclaim the narrative that has been hijacked by the military and the Muslim Brotherhood. 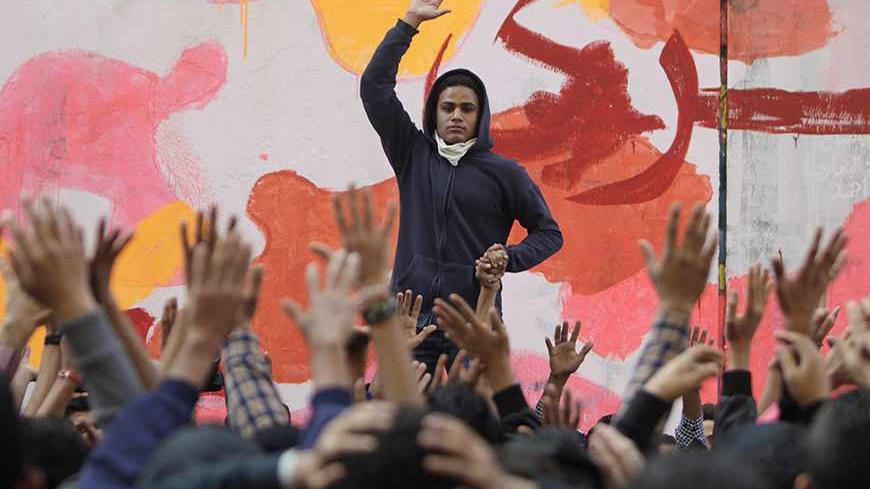 An anti-military protester leads chanting during a rally to commemorate the second anniversary of the deaths of 42 people in clashes with security forces on Mohamed Mahmoud Street, near Tahrir Square in Cairo, Nov. 19, 2013. - REUTERS/Mohamed Abd El Ghany

CAIRO — On the evening of Nov. 18, Helmy al-Sayed carried a placard that almost got him kicked out of a march in downtown Cairo. The words on it and the ensuing argument represented the type of problems march organizers wanted to avoid by holding it a day before the second anniversary of the Mohamed Mahmoud Street clashes and away from other events planned by opposing groups.

On that day, the chants were against the security forces, commemorating the five-day clashes in 2011 with the police in which over 45 were killed. Participants angrily ridiculed the announcements by pro-army groups and the police to mark the day. When they read Sayed’s sign, “Army, police and people, together mean the success of the revolution,” they kicked him out.

“I told them I’m a father of a martyr,” Sayed said. His son Mostafa was killed on Dec. 16, 2011, in clashes with the military. Over the past two years, Sayed and his wife would carry a banner with their son’s picture and name during major protests in Tahrir Square. On Nov. 18, some came to his aid. A compromise was reached: He took down the placard and was allowed to stay. He was still furious as he recounted the incident hours later in Abdeen Square, where the short march culminated about 2 kilometers (1.2 miles) from Tahrir Square.

It was the first significant street presence for protesters alienated by the ongoing and deadly struggle between the military-led government and supporters of ousted President Mohammed Morsi. Chants on that night and the following day in Tahrir Square were against both. On Nov. 19, a banner prohibiting the entrance of the remnants of the Mubarak regime, the military and the Muslim Brotherhood hung on the entrance of Mohamed Mahmoud Street from Tahrir Square.

Several battles were at play: carving out a space for that third voice in a polarized scene, regaining ownership of the revolutionary banner claimed by the other two sides and wrestling control of how history is written and rewritten.

The fight for space quickly materialized on Nov. 19 in scuffles between the Mohamed Mahmoud protesters and supporters of the military, who held posters of Defense Minister Abdel Fattah al-Sisi, shouting, “We love you, Sisi,” as teenagers taunted them with anti-police chants. Before being chased away, the smaller pro-army crowd first occupied a monument erected by the government the day before and destroyed by protesters hours later. The structure was to commemorate “all martyrs of the revolution.”

“We provide the martyrs, and they take the condolences,” one protester said later in bitter humor. Attempts by the government to appropriate the memory and reshape it to its benefit were compared to attempts by the Muslim Brotherhood to hijack the anniversary, when two years ago the group’s politicians condemned those who took part in the clashes. Smaller scuffles also broke out with protesters flashing the four-finger sign symbolizing the deadly crackdown on Morsi supporters in August.

Set against the backdrop of state and privately-owned media’s recurring messages that any street action against the security services must be orchestrated by the Muslim Brotherhood, the defaced structure at the heart of the square emphasized the state’s relentless pursuits as a bigger and more irritating challenge.

Two days before the anniversary, the Interior Ministry’s spokesman said in a video message that police would protect demonstrators marking the day against infiltration. The short speech played on the discourse that blames the Brotherhood as the invisible “third party” responsible for all the deaths since the 2011 uprising. The general treated it as a given not worth mentioning — as opposed to his blunter statements in a July press conference.

The video transformed the objective of the nascent attempts to rewrite history from merely absolving security forces from responsibility to awarding themselves the glory of fallen martyrs, brushing over the minute detail of having pulled the trigger. In the course of cementing this eyebrow-raising rhetoric, the state wavers from warding off blame to defending and glorifying the use of excessive and deadly force.

Along the way, facts and justice are sidelined; a group working on following up with a fact-finding report commissioned and later shelved by Morsi released snippets of evidence against the police in the 2011 clashes, but received little attention. Justice became a far-flung goal that can only be achieved after many battles are won.

These battles are seen as essentially moral, but are often played out in political affiliations. The underlying understanding is that everyone protesting on Nov. 18-19, especially those who had suffered the pain of loss, shared the same convictions. Sayed was a testament to the contrary. Some could argue that he was influenced by the heavy propaganda that made anger at the Brotherhood for abandoning certain battles directed at the killers. Crimes committed by Morsi’s regime and later by his supporters are closer to memory. The public discourse of fighting terrorism has dominated public consciousness. "Such circumstances demand unity. …Retribution could be delayed," Sayed said. “If someone kills your son, it doesn’t mean you kill his family.”

Sayed’s argument is not unique. Some victims and families of men killed by the police and army have vocally supported Morsi's military’s ouster and its current policies. On Nov. 18, however, the message voiced by other victims and activists disregarded this layer within the crowd. On the stage set up for families of martyrs, including Sayed, speakers explained that the fight has not changed. Continued security crimes — directed at them or the Morsi supporters they loath — stand in the face of achieving the goals of the revolution, headlined by dignity.