Verdict in police brutality case in Egypt may be exception

Police brutality in Egypt is not expected to disappear despite the March 3 verdict over the death of Khaled Said in June 2010. 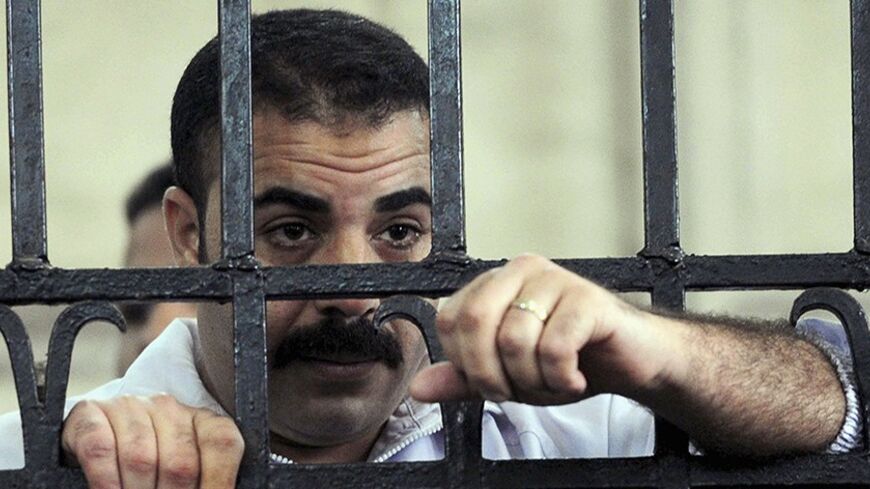 Egyptian policeman Awad Soliman reacts in the dock during his trial in court in the Mediterranean city of Alexandria, 220 km (137 miles) northwest of Cairo, March 3, 2014. - REUTERS/Al Youm Al Saabi Newspaper

ALEXANDRIA, Egypt — Inside the Alexandria courtroom on March 3, Mahmoud Salah Mahmoud, one of the police officers charged with the death of Khaled Said, 28, reeled back when the judge announced he would be serving a 10-year prison sentence alongside co-defendant Awad Soliman. A guard inside the dock rubbed Mahmoud's back. It was a gesture of pitiful consolation surrounded by an iron cage, a wall of geared-up Central Security Forces troops.

Arguments had already broken out between police and members of the defendants' families. "Where are the police generals?" Mahmoud's brother screamed after the verdict was announced. "Why do they not protect their officers?"

Some expect the sentence to be reduced should the appeals court accept an appeal by the two men. A hearing expected within the next 30 days will explain the sentences based on case evidence.

Police accused of killing civilians during the 18 days of the 2011 revolution have recently walked free. Six police officers previously charged with killing 83 protesters in Alexandria were acquitted on Feb. 22. Few police officers have been successfully charged with killing civilians since the January 25 Revolution — one famous exception was "The Eye-Sniper," 1st Lt. Mahmoud Sohby el-Shinnawy, who was handed a three-year sentence for deliberately firing cartouche rounds at protesters on Mohamed Mahmoud Street in November 2011.

At first, the March 3 verdict looks like a small but significant victory for the lawyers, activists, friends and family who have been fighting for this case, one of the most infamous instances of police brutality in pre-revolution Egypt.

"You could say that," replies Hamdy Khalaf, human rights lawyer for the Egyptian Initative for Personal Rights (EIPR) in Alexandria. A line of Muslim Brotherhood youth in prisoners' suits file into another courtroom behind him as he speaks. "But the reality is, it will take more than one, two, four verdicts to win a victory against police brutality. You need to reform the whole system, change the mentality." The impact could be limited.

Said's death on June 6, 2010, became a rallying cry for Egyptians demanding an end to abuses by the authorities. One Egyptian Google employee living in Dubai, Wael Ghonim, was so upset by the picture that showed Said lying in the morgue with a trampled face that he helped start a Facebook page — We Are All Khaled Said — organizing solidarity street protests in the run-up to Jan. 25.

The page has since fallen silent. Some say it is needed now more than ever. The latest Egyptian Center of Economic and Social Rights (ECESR) figures say at least 16,687 political detainees have been imprisoned since Mohammed Morsi's July 3 overthrow, along with a further 4,482 civilians and 198 members of the army and police killed in the same period. Stories of torture and routine abuses by security forces are rampant in Egypt. The story of what happened on June 6, 2010, resonates today.

Said was bludgeoned to death in Alexandria's Cleopatra neighborhood, after being pulled out of an Internet cafe by two police officers. Eyewitnesses testified seeing Mahmoud and Soliman punching, kicking and stamping his body in broad daylight. "I will die! I will die!" one remembered Said screaming. Coming from an upper-middle-class family, Said was not the usual target for this kind of street-level thuggery by the police.

"We knew police brutality was going on in the police stations for years," says Mahienour el-Massry, a prominent Alexandria activist who was recently charged in absentia for protesting outside a Dec. 2 session in the same trial. "What was different about this was [Said] was the type of person who shouldn't have been exposed to police brutality. He was our age … he was upper-middle class, not an activist, not a religious extremist. And yet that didn't protect him."

Authorities immediately claimed Said had been wanted for drug offenses, that he had choked on a rock of hashish, earning him the posthumous title, "The Marijuana Martyr." Activists later said Said was targeted because he had a video on his phone showing police racking up piles of cash and drugs, apparently after some kind of deal. A picture taken by Said's brother inside the morgue that day suggested he was killed by something much more than asphyxiation. There was stretched skin, smashed bones, teeth jutting out at unimaginable angles.

The defense has since claimed the picture was "fabricated" by Said's "American-Jewish brother" who now lives in the United States. Lawyer Ihab Abdel Aziz had previously claimed the entire case was a "Zionist creation," Mada Masr reported in January.

Said’s case still has the power to divide opinion in and outside the courtroom.

Mohamed el-Sayed held a red banner praising Interior Minister Mohamed Ibrahim in front of the half-dozen armored personnel carriers and police vans shadowing the court. "They shouldn't have been given 10 years," he told Al-Monitor. "They've sentenced the Ministry of Interior — it's not right."

For activists who participated in the January 25 Revolution, the word "stability" is seen to be a cover for the old abuses of the regime. "The state is driving its propaganda against the revolution," Massry said. "Many people in the streets think the police brutality is justified … the state is telling them that this is necessary for stability."

Naima Mohamed Abdel-Rahman, a middle-class housewife, walks past with her daughters. "What happened to Khaled Said was an injustice. The officers should suffer the same pain as him, his family and those who loved him, " she said. Abdel-Rahman, like others who stopped to talk among the ice cream vendors and loiterers along the Corniche, said she expected harsher punishments, "Death penalties, maybe, or at least 25 years in jail."

But Said's death is seen by some as an individual case of excess carried out by "bad" police.

"Khaled's was not an ordinary case," Massry stressed. "He is a symbol of the revolution. He is a symbol for all the Egyptian revolutionary youth who remember the time of [Hosni] Mubarak."

Said will always be a symbol. But the verdict against his killers may, too, become a symbolic exception in a society that currently appears satisfied to cheer on violence and impunity at the hands of the Egyptian security forces.