The Egyptian government’s recent decision to list the Muslim Brotherhood as a terrorist organization is meant to draw attention away from criticism directed at the government and will not help address Egypt’s primary challenges. 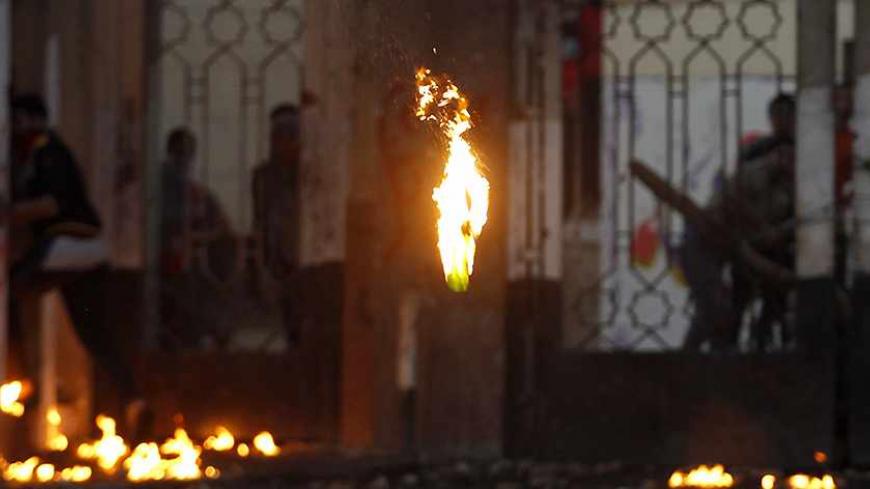 A Molotov cocktail is seen mid-air during clashes between riot police and students of Al-Azhar University, Cairo, Dec. 27, 2013.

The sight of blood and charred debris, the screams of loss and pain and the rising death toll often leave people speechless, unable to comprehend a thought.

The state of shock swiftly turns into hysteric consensus over any idea that appeals to the crowd or part of it. Probing questions are quieted or dismissed as preposterous.

Declaring the Muslim Brotherhood a terrorist organization, even though a court is still to give a verdict to that effect, caters to this reaction and helps in distracting from the unpopular type of criticism directed at the government.

Blaming Prime Minister Hazem el-Biblawi for being too weak and indecisive, sometimes even of being a secret ally of the Muslim Brotherhood, is common. The inefficiency of the security services is not, despite the explosion that left 16 dead at the premises of the Mansoura security directorate on Dec. 24. Such facilities across the country are heavily guarded and the surrounding streets are often closed to traffic. For a vehicle laden with a sizable amount of explosives to enter a densely populated city and come this close to the police building — 6 meters (20 feet) away from the street leading to the entrance according to preliminary prosecution findings — demonstrates a grave failure to secure a vital facility with all resources available.

This also applies to the intelligence services, which has failed to provide pre-emptive information despite reports of looming attacks. Previous acts of terrorism, including the one targeting the interior minister in September, indicate a pattern of infiltration and leaks. The video released by Ansar Bayt al-Maqdis for the failed assassination of the minister showed an ex-army officer involved. The Sinai-based group also claimed responsibility for the Mansoura attack and others in mainland Egypt.

There is no way to fairly evaluate the effectiveness of the army campaign on terrorist cells in Sinai, including Ansar Bayt al-Maqdis, due to restrictions on coverage. Its statements describe the killing and arrest of suspects and the destruction of their homes and other properties. The only visible gauge so far is the frequency and impact of attacks on security facilities and personnel in the Sinai Peninsula, which are unabated.

Meanwhile, state officials including security and their allies take the opportunity to settle scores with foes and pundits — Islamist or not — forgetting to practice what they preach of leaving personal interests behind to fight the proclaimed war.

The war on terrorism, bundled with any street disturbance, is used to win battles the police state lost following the uprising in 2011. Dabbling in politics instead of relevant security work was previously the popular reason for the notoriety of state security, whose work was described as unjust, unsustainable and counterproductive. Now it is hailed back to the scene as necessary, along with the police presence on university campuses, which was once blamed for undermining education without any effect beyond crackdown on students’ political activities.

Yet, any failure is explained as inability to fully deploy repressive measures. There is a widely held belief that Defense Minister Gen. Abdel Fattah al-Sisi, who called for and received a popular and vaguely defined mandate to fight terrorism in July, is yet to unleash the magic that he has allegedly been holding back for some reason. The government had it all: three months of emergency laws, a military curfew and free reign, but it failed to put an end to terrorism. On the contrary, its reach and intensity seem to be on the rise. The blame is deflected to pundits as if the scant voices calling for upholding the law and refraining from counterproductive, excessive and random force have had any impact on the performance of the police.

There is no room or tolerance to evaluate the performance of the military-backed government and hold it to its July promises. The army’s intervention to remove President Mohammed Morsi on July 3 was promoted as necessary to stop bloodshed. It soon turned into a bet on a swift crackdown that would crush the Muslim Brotherhood and their Islamist allies for good. It was an ironic reproduction of impractical statements made by Muslim Brotherhood ally and Gamaa Islamiya leader Tarek al-Zomor when he promised to “crush” opponents in June.

The bet was lost as the deadly August crackdown fueled more violence, pushing Egypt into an infinite circle of civil strife.

This is not to absolve terrorists, but to first find the real culprits and hold the state up to its responsibility. There is evidence that the Muslim Brotherhood used violence on the street, but so did the police on a larger and incomparable scale. To date, there is no clear evidence linking the Muslim Brotherhood with the groups that claimed responsibility for the major bombings. Evidence here is important not only because it prevents injustice poisonous to society but also to ensure the real culprits are caught.

The government has reduced its role to its security arm, despite the failure of its deadly campaign to bring solutions or the promised closure. The military-backed government has failed to live up to its promises to stop civil strife and has worked systematically to fuel it. It offers no encompassing, long-term vision to mend the rifts in society or stabilize the country. Its reactionary decisions have exacerbated the violence by all sides involved. Ignoring warnings that a brutal crackdown would radicalize segments of Morsi’s supporters and encourage smaller, unknown pro-violence groups to retaliate can’t be explained as state defiance but as absence of any forward-thinking and comprehensive strategy that factors in all possible reactions. The same applies to the decision to list the Muslim Brotherhood as a terrorist group that is used to punish its protesters despite legal loopholes and is complemented with calls to report citizens suspected of membership to the group, poisoning society even further. It offers no explanation on how this would prevent something like the Mansoura bombing.

Preventing civil strife is not about who is bad or good or who deserves to be killed or tortured — as some argue — but is about preserving a country from tearing itself apart. This is why the state is required to look and deal with the bigger picture instead of forcing its citizens to pay the price of its failures, whether economically, socially or in the form of their physical security and basic rights.