A few hundred members of the April 6 Movement take to the street in defiance of an Egyptian government ban. 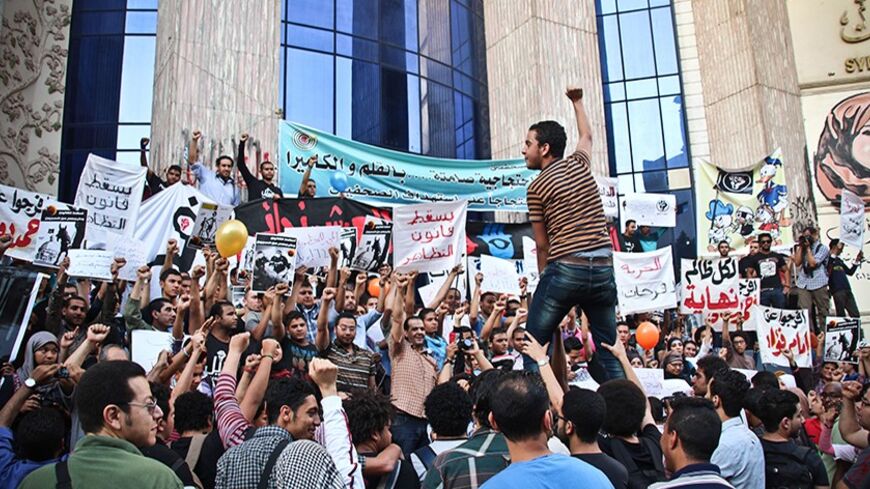 CAIRO — Days after a court-ordered ban on the April 6 Movement, a few hundred of its members ridiculed the government during a protest in defiance of Egypt’s protest law, holding up balloons and a cake in mock celebration of the ban, and a watermelon inscribed, “Your mother is banned.”

A court on April 28 ordered a freeze on April 6 activities, charging the movement with defamation of the state and espionage. The group has been the target of smear campaigns by opponents and officials since the spring 2011 uprising, facing similar accusations from the Supreme Council of the Armed Forces (SCAF) that assumed power after President Hosni Mubarak resigned.

But this is the first time the movement has been legally banned, a move some Egyptian parties this week are describing as politicized, and which the US government called “troubling.”

“We are here to celebrate the ban with sarcasm because since our founding the government has been trying to ruin our image, and this is the price of struggle we have paid — from martyrs to people being jailed — not just from our movement but the whole nation,” April 6 leader Zizo Abdo told Al-Monitor. “We will continue paying this price until we get justice in this country.”

The movement was founded in 2008 to support a textile worker strike in the industrial city of El-Mahalla El-Kubra, and played a major role in the mobilization of activists leading up to the toppling of Mubarak. Today, under the rule of the interim government that overthrew Islamist President Mohammed Morsi last July, its founders Ahmed Maher and Mohammed Adel are serving a three-year prison sentence for breaking Egypt’s protest law. The law was issued last November by interim President Adly Mansour, and there have been renewed calls for its repeal.

In a statement on the day of the court ruling banning the group, the campaign of Nasserist presidential candidate Hamdeen Sabahi warned of a "return to a state of suppression,” and reproached what it described as the use of Egypt’s courts for political means and repression.

The liberal Constitution Party stated that the ban represents a "dangerous departure” from the democratic principles that the Egyptian people espoused on the streets in 2011, during spring protests to remove Mubarak, and in 2013, during summer protests to remove Morsi. The party also said the charges against the group are false, and “the rule of law is as threatened now as it was when the Muslim Brotherhood was in power.”

Also on April 28, a court in Minya sentenced to death a top Brotherhood spiritual leader and more than 680 others for the killing of a police officer last summer — evoking international condemnation. The Brotherhood was banned as a “terrorist organization” by the Egyptian government last fall, following deadly crackdowns in the street against its supporters.

US Department of State spokeswoman Jen Psaki said in response to both rulings that the United States. “is deeply concerned.” She called the upholding of previous death sentences for Brotherhood members “unconscionable,” and said the decision to ban the activities of April 6 was “troubling."

“It is impossible to believe that such proceedings could satisfy even the most basic standards of justice,” Psaki said, and urged Egyptian authorities to reverse the rulings.

A day later, US Secretary of State John Kerry said in remarks at a joint news conference welcoming Egypt Foreign Minister Nabil Fahmy to Washington that the recent court decisions were “disturbing” and “have raised serious challenges for all of us.”

The United States recently confirmed that it would send Egypt 10 Apache helicopters for counterterrorism efforts in the Sinai Peninsula. After the death sentences issued this week, US Sen. Patrick Leahy, who heads the Senate subcommittee on foreign aid appropriations, said he would put on hold $650 million in military aid to Egypt that was approved by the Pentagon last week.

Fahmy said at the news conference there were “challenges within the judicial system” in Egypt that “are completely independent from the government.” He added he is “confident” that “the legal system will ultimately end up with proper decisions in each of these cases.”

April 6 lawyers are preparing an appeal of the legal ban, Abdo said, and its members will continue to defy the ruling by continuing their activities.

The movement views the ruling as “weak and without evidence,” he added, and Egypt’s current government as “illegitimate.” It is likely that under the ban the police may launch sweeping arrests of members, Abdo added, and many are bracing for, and accepting, such action. “We accept it because this is the price that we have to pay,” he said.

As Abdo spoke to Al-Monitor across from the Press Syndicate in downtown Cairo on April 30, several shouting matches broke out between groups of bystanders with mixed political views.

“You are traitors, you are thieves, an investigation is going to start next week!” yelled Abdel-Aziz Fahmy, president of the National Accord Party, a vocal opponent of the April 6 Movement and of specific activists including April 6 founder Asmaa Mahfouz and blogger Alaa Abdel-Fattah, both of whom he claimed to have helped jail in his role as a state security informant.

“You will go to court for being terrorists because all your activities are banned!” Fahmy yelled, before being ushered away by several men as a veiled woman shrieked, “Shame on you!”

As the crowd around them grew, another man exclaimed, “Abdel Fattah al-Sisi has been in power for less than a year and he's divided the people!” in reference to the popular former defense minister who is running for president, and is viewed as the public face of Morsi’s ouster.

As debate continued, across the street April 6 members chanted a familiar refrain heard on the streets since 2011, “Down, down with military rule!”