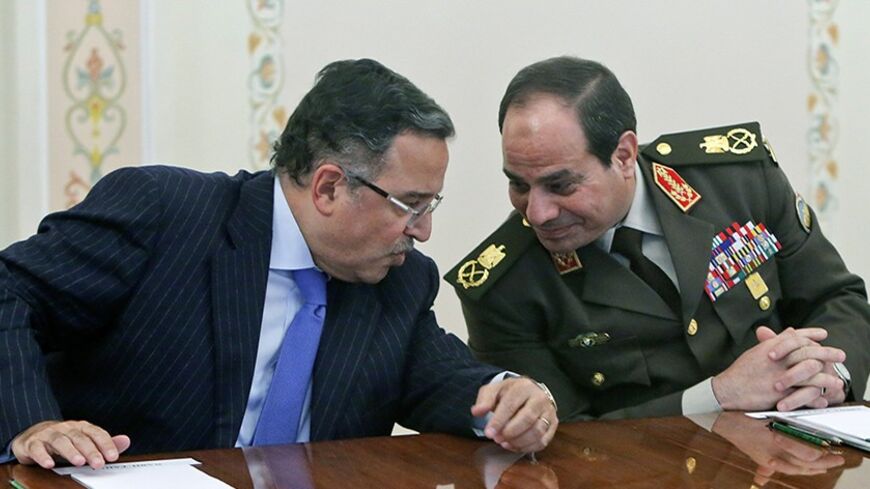 As demonstrators protested outside and the State Department condemned the latest Egyptian death sentences of supporters of the Muslim Brotherhood, Egyptian Foreign Minister Nabil Fahmy sought on April 28 to convince an elite Washington audience that Egypt is still moving toward a participatory democracy and values its relations with the United States.

But Fahmy, speaking at the Center for Strategic and International Studies (CSIS), also said that Egypt has other options, including “an emerging relationship with Russia [that] we will seek to nurture and leverage.”

The veteran Egyptian diplomat, who served as President Hosni Mubarak’s ambassador to Washington for nine years starting in 1999, is meeting with US officials at a time of considerable tension over Egyptian policies, in particular the barring of the Muslim Brotherhood as a terrorist organization. Hours before Fahmy spoke, a provincial Egyptian judge sentenced the spiritual guide of the Brotherhood, Mohammed Badie, and 682 others, to death. At the same time, a Cairo court banned the activities of the April 6 Movement, a secular liberal group that helped instigate the revolt against Mubarak in 2011 and that has protested the wholesale crackdown on political freedoms in the country since Egypt’s only democratically elected president, Mohammed Morsi, was ousted last summer.

State Department spokesperson Jen Psaki issued a statement on April 28, saying that the United States is “deeply concerned by today’s Egyptian court actions related to another mass trial and preliminary death sentences as well as the banning of the April 6 Youth Movement activities. Today’s preliminary death sentences against 683 defendants and the upholding of death sentences against 37 defendants from a March 25 decision are unconscionable.” The statement went on to urge Egyptian authorities to reverse the rulings and suspend future mass trials, asserting that the court decisions “run counter to the most basic democratic principles and foster the instability, extremism, and radicalization that Egypt’s interim government says it seeks to resolve.”

Fahmy, queried about the death sentences, noted that the verdicts were not final and that the court in Minya had “corrected itself on a previous position. … Don’t jump to conclusions, and let the legal process follow through.” Egyptian authorities have indicated that they intend to appeal the sentences, which were handed down after brief proceedings in which most of the defendants were absent.

The chanting of Egyptian-American protesters on the street outside could be heard faintly while Fahmy spoke. They chanted “Morsi was elected, Sisi is rejected,” referring to Field Marshal Abdel Fattah al-Sisi, the military strongman who is expected to easily win presidential elections scheduled next month. Some demonstrators held placards saying “Sisi is a murderer” and demanding freedom for thousands of political prisoners, who include Morsi and numerous Brotherhood members and sympathizers as well as secular liberals and journalists.

Fahmy repeatedly used the word “transformation” to describe Egypt’s turbulent political journey. Asked about the prolonged imprisonment of three journalists from the Arab satellite channel Al Jazeera, Fahmy said, “The whole country is going through a transformation. Part of that will be changing laws and practices. … The Egyptian people revolted twice for a democratic system but the process will have to go through a transition.” He added, “The real challenge is how do we put in place a system that is accountable, transparent and inclusive for all Egyptians that want to accept the new constitution as the basis for how Egypt is governed.”

He also acknowledged daunting economic challenges caused by Egypt’s rapidly growing population and the flight of capital and foreign tourists since unrest began three years ago. “We need to grow 8-10% a year just to make ends meet,” Fahmy said. He did not mention the generous assistance provided by Saudi Arabia and the United Arab Emirates following Morsi's ouster.

On foreign policy, Fahmy said that confidence has “eroded” between Egypt’s government and the Barack Obama administration, which suspended some aid to Egypt following Morsi’s ouster and has only just agreed to release 10 Apache helicopters for Egypt to use against terrorists in the Sinai Peninsula.

“Global rebalancing” affords Egypt an opportunity to “diversify its portfolio of strategic and economic relationships,” Fahmy said. “We will continue to maintain and indeed enhance our strategic relationship with the United States and Europe. However, we will also look elsewhere. Our emerging relationship with Russia is one that we will seek to nurture and leverage.”

Fahmy said that better ties with Russia did not have to come at the expense of the United States and would serve Egypt’s interests as well as its ability to resolve regional crises, such as the civil war in Syria. When President Obama said the United States was pivoting toward Asia, Fahmy said, Egypt did not see that “as a diminishing of our importance.”

Fahmy said repairing ties with the United States “will require a candid, honest, conceptual conversation on both sides” that would not conclude during his visit. While the United States understandably cares about Egypt’s internal developments, given the country’s importance in the region, he underlined that “Egypt’s domestic transition and our politics will be decided by Egyptians and its foreign policy will be multidimensional and proactive.”

Fahmy added, “Our relationship has and may still have to go through turbulent times. … Whatever our differences, both sides share a considerable array of common strategic interests,” including promoting Arab-Israeli peace, regional stability, non-proliferation and counterterrorism.