Three leading activists from the April 6 Youth Movement, including founder Ahmed Maher, remain behind bars as Egypt's crackdown widens to include secular activists. 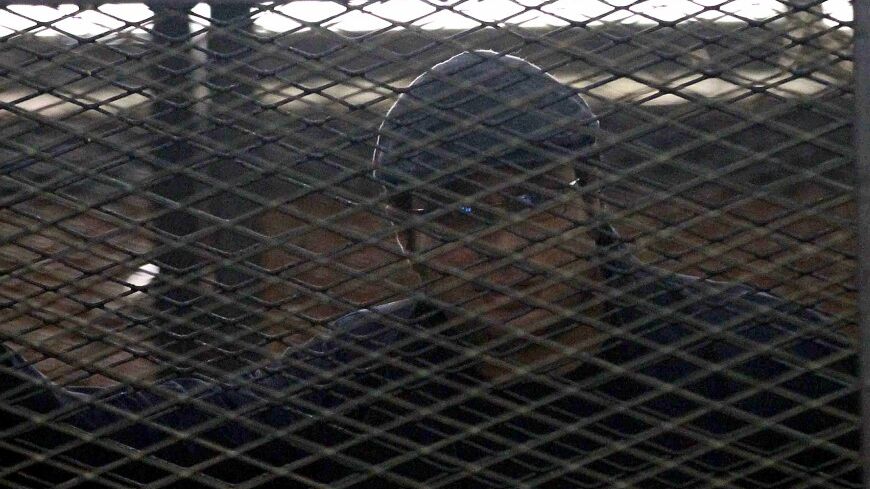 CAIRO — "We have been living in a comic strip," claimed April 6 Movement founder Ahmed Maher in a recent letter smuggled from his prison cell.

He was talking about Abdel Fattah al-Sisi's will-he-won't-he presidential bid, but with Egypt's recent legacy of revolutions contorted in and out of shape, its media's cartoonish re-imaginings of events and a state flexing its muscles, Maher could have been talking about a lot of things. The group he helped found, the April 6 Youth Movement, has been a central character in all this.

On the morning of April 7, Maher and leading activists Mohammed Adel and Ahmed Douma were refused appeal for three-year prison sentences handed down in December for disobeying Egypt's protest law.

Activists have demanded a presidential pardon for the three men, protesting on April 8 outside the Ittihadiya presidential palace and marching on Talaat Harb Square on April 10 to make their point. A larger protest is already planned for April 26. Chants of "The revolutionaries will be there" were heard on Thursday between beeping cars, informing passersby.

The protest law was widely criticized by human rights groups as repressive when it passed in November. Human Rights Watch claimed the law would "effectively give the police carte blanche to ban protest in Egypt."

The April 6 Movement began life in solidarity with the labor protests of April 6, 2008, in Mahalla, Egypt's fourth largest city and an industrial heartland. The city drove opposition to Hosni Mubarak's regime in the decade leading up to the January 25 Revolution.

"This was the true beginning of the revolution," Kamal el-Fayoumi, one of the strike organizers in 2008, told Al-Monitor. Fayoumi remembers the attempts by state-controlled workers' unions, state security and police to shut down what was then an unprecedented display of dissent.

This year, there were no protests in Mahalla. "The workers are on the back foot now. The revolution has lost direction and the Mubarak-era feloul [regime remnants] are trying to come back. But the revolution is still going on," Fayoumi claimed from Mahalla, echoing the words of April 6 Movement activists back in Cairo.

"April 6 is in the streets and it's an idea — they can't ban that,” April 6 Movement organizer Ayman Abdelmeguid told Al-Monitor.

But the movement has had to face realities. The Youth Movement and the Democratic Front — which originally split in 2011 over political differences — have begun to reappear in public and march together. Some are calling it reconciliation.

Democratic Front activist Sherif al-Rouby admits the coming-together was a result of the state's attack on the April 6 Movement, the group and what it represents. "If it wasn't for the campaign, we'd still be separate," he told Al-Monitor. "We recognize each other now as two groups. Because of the attack [by the state] we found that we could collaborate on two issues — arrests and the martyrs." The April 6 Movement, like any political faction taking to the streets in Egypt these days, has had plenty of experience of both.

Much of the Egyptian public has turned its back on the group, whether through a hope for stability and economic recovery or, some suggest, as a symptom of the propaganda campaign against January 25 revolutionaries.

Beyond locking away its most recognizable figureheads, a court will decide on April 28 whether the movement should be banned, based on accusations that include "tainting the image of the state and spying for foreign countries." As a visible and infamous part of the January 25 Revolution, the April 6 Movement has in the past been accused of receiving foreign funding, maligning the Egyptian army and — more recently — representing a terrorist threat to the state.

Key members of the group have been hounded by authorities, imprisoned and tortured. Their stories are just one part in the cavalcade of intensified repression witnessed since July 3, 2013, which has seen an estimated 18,977 imprisoned and several thousand killed and injured, according to Egyptian Centre of Economic and Social Rights figures. Over 3,140 have died through protests, crackdowns and terrorism in the same period, the tally states.

While January 25 activists and thousands more — routinely reported as Muslim Brotherhood supporters or members — languish in jails across Egypt, outside, workers' protests have grown.

In Mahalla, a strike by Misr Spinning and Weaving workers appeared to kickstart a new wave of industrial unrest. While Mahalla's textile workers are back at work and did not demonstrate on this year's anniversary, thousands of others have staged walkouts, protests and sit-ins demanding better pay and conditions since January.

There may now be a disconnect between the April 6 Movement and the workers, according to Massry. "The problem with this attack on [the group] is that the workers are a bit afraid that their demands will not be fulfilled." Quieter activism and solidarity-building around industrial unrest is still taking place, though. "Of course, the operations against the revolutionary groups put barriers between them and the workers," Haitham Mohamadeen, a prominent leftist activist, told Al-Monitor. "But we go to factories during strikes and workers still receive us."

Workers' protests were widely reported to have contributed to the downfall of Hazem el-Biblawi's transitional cabinet in February and, after the Biblawi government resigned en masse in February, Sisi has already suggested he will be looking to tackle industrial unrest if he becomes president.

But, contrary to the idea that a Sisi victory is game-over for the Egyptian revolution, Massry believes the post-election period could prove critical. "This isn't going to happen until after the elections when people have given them a go … their dreams will fall to the ground and the illusions about Sisi and military rule will disappear," she said.

"Maybe after that, people will start to regain faith in movements like April 6, which have been trying to tell people that this is not the right way for progress."