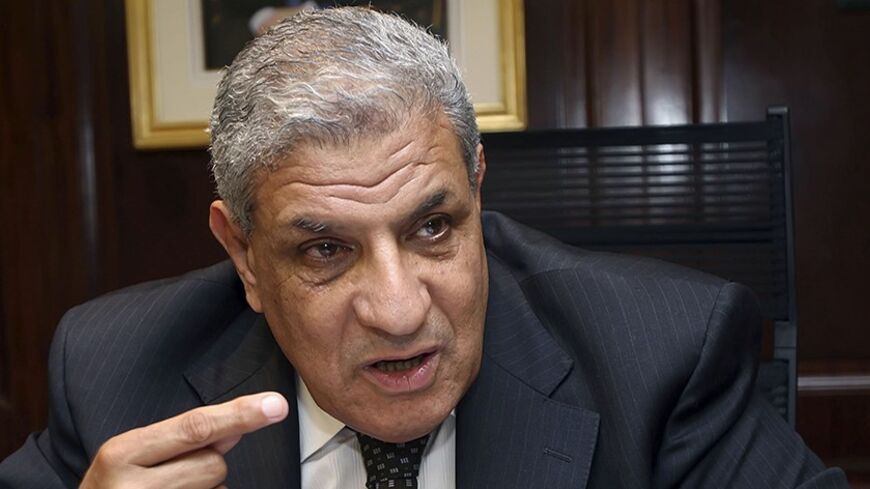 CAIRO — "Security and stability in the entire country and crushing terrorism will pave the way for investment." So Ibrahim Mehleb introduced himself as Egypt's new prime minister on Feb. 25, promising that security solutions would finally bring economic prosperity to a country very much ready for it.

But the mass Cabinet resignation announced by former Prime Minister Hazem el-Biblawi Feb. 24 means a consensus on how to deal with growing labor unrest may now start to crumble, complicated further by the reported exit of leftist Kamal Abu Eita as Egypt's manpower minister. Mehleb, housing minister under Biblawi and a member of deposed President Hosni Mubarak's disgraced National Democratic Party before that, has a difficult road ahead.

Mehleb must negotiate a way out of the burgeoning labor unrest that has workers armed with a range of demands, including the 1,200 Egyptian pound ($172) public sector minimum monthly wage originally promised by the government by the end of January. As noted by Al-Monitor’s Bassem Sabry, some have pointed to this wave of strikes as a contributing factor in the Cabinet resignation, of which some ministers were not even aware before Monday's announcement.

"It is time we all sacrificed for the good of the country," Biblawi said in his 15-minute address. "Rather than asking what has Egypt given us, we should instead be asking what we have done for Egypt."

The independent daily Al-Shorouk, citing sources close to Biblawi, suggested that striking workers had contributed to his resignation. Biblawi met with interim President Adly Mansour on Feb. 23 and discussed the strikes, the newspaper's sources claimed.

Josh Stacher, author of Adaptable Autocrats: Regime Power in Egypt and Syria and a political science professor at Kent State University, believes the Cabinet resignation was a top-down decision by Egypt’s generals.

"People were saying [the resignation] happened now because of Sisi," he said, referring to Gen. Abdel Fattah al-Sisi's long-awaited presidential bid. "It happened now because there is unrest, as well as gas shortages and electrical cuts." Power outages have become a more regular problem in Egypt in recent weeks.

Meanwhile, protests have spread outward from Mahalla, the spiritual home of the Egyptian workers' movement, to the very heart of Cairo.

Workers at Mahalla's state-owned Misr Spinning and Weaving Company walked out on Feb. 10, demanding the removal of holding company Chairman Fouad Abdel-Alim and the application of the minimum wage. Workers at this factory first demanded a minimum wage in 2006.

After a wave of solidarity strikes and sit-ins at textile operations around Egypt, more public sector workers have walked out.

An ongoing public transportation strike has halted buses in all 28 of the Greater Cairo Authority's garages, costing the city an estimated 800,000 Egyptian pounds ($115,000) a day, according to Cairo Gov. Galal al-Saeed.

"The main reason behind the resignation was the workers. The former Cabinet promised the minimum wage and then never applied it,” Aly Fatouh, a strike leader at the Public Transport Authority in Cairo, told Al-Monitor.

But, Fatouh claimed, workers should also give the new government a chance. He said, "Workers should cooperate with the government … after the achievement of their demands."

As long as the minimum wage remains out of reach for Egypt's workforce, there is a risk of more strikes. Workers are also striking for permanent contracts, better conditions, the payment of bonuses and changes in company management.

A decision was made on Feb. 22 to suspend the Mahalla strike for two months. But if the Feb. 25 press conference is anything to go by, Mehleb will be looking to shut down further labor unrest, and fast. “Making demands that exceed logic will destroy the country,” he was quoted as saying. "We’re betting on the patriotism of the Egyptian workers." The suggestion is that the government may have limited patience for future strikes.

Mehleb's rhetoric is symptomatic of a consensus maintained by trade union federations and government officials since the July overthrow of deposed President Mohammed Morsi. Egypt's "patriotic workers," so the official line goes, will not strike out of respect for the Egyptian nation in its time of need.

"We have patriotism," said Kamal el-Fayoumi, a textiles strike organizer from Mahalla. "That is why we want to make [Misr Spinning and Weaving] work at full power. … We are striking to increase production."

"What patriotic sense?" he asked. "We are pushing for production."

The Egyptian Trade Union Federation, considered by independent union advocates and activists to be an arm of the state, has repeatedly called for calm. Its president, Gebaly al-Maraghy, told Al-Monitor in mid-February, "Our battle is to increase production and combat terrorism. If we don't win, the whole of Egypt will be destroyed."

Other arms of the regime are also combating workers with "patriotism." In response to the transport strike, army spokesperson Ahmed Ali's Facebook page displayed photographs of soldiers loading elderly citizens onto officially sanctioned coach services emblazoned with the Egyptian flag. A statement cited the army's "great social responsibility" toward the "great Egyptian people."

But Stacher claimed this rhetoric predates the interim government. He said, "This is the same discourse used after the initial 18 days [of the January 25 Revolution] by [former Field Marshal Mohamed] Tantawi and company. It's about demobilizing workers."

Many had hoped that Abu Eita, selected as labor minister in Biblawi's Cabinet, represented a genuinely progressive appointment at a time of street massacres and arrests. "Abu Eita was staunchly independent before joining the government," explained Stacher.

Previously the leader of the Egyptian Federation of Independent Trade Unions, Abu Eita had helped maintain quiet at factories while the military-backed road map progressed. Though he was respected by trade unionists at the local level, his supporters say he was put in a powerless position, negotiating within a government that had no interest in negotiating.

"By using our legitimate right to strike, we're helping officials to achieve our goals," Ahmed Ramadan, Misr Spinning and Weaving Company's independent union leader, told Al-Monitor. Asked which officials he was referring to, Ramadan pointed to Abu Eita. "He is from the workers' movement and we are helping him."

But now Abu Eita is out, to be replaced by Nahed el-Ashry, according to reports. Like Mehleb, she is seen by some as tainted by the Mubarak era.

"She has been in the ministry since Mubarak," claimed Fayoumi. "She has a history of negotiating with the workers and screwing them over."

Fatouh stressed that workers must "give the government a chance," but that Ashry may not have been "the best choice."

"This phase, with all the strikes, requires a smart person with the capabilities to deal with this tough situation."

With Abu Eita gone, Egypt's new Cabinet will be harder pressed to placate workers while also delivering on its promises of stability and economic prosperity. A hard-line approach could also seriously inflame unrest led by workers across Egypt.

"I don't know what else the new prime minister wants to tell the workers," said Fayez, "except that the Mubarak regime is back."