Despite the Russian war on Ukraine and its negative repercussions on global trade, Egypt succeeded in exporting 50,000 tons, or up to 75%, of its cotton production this season. 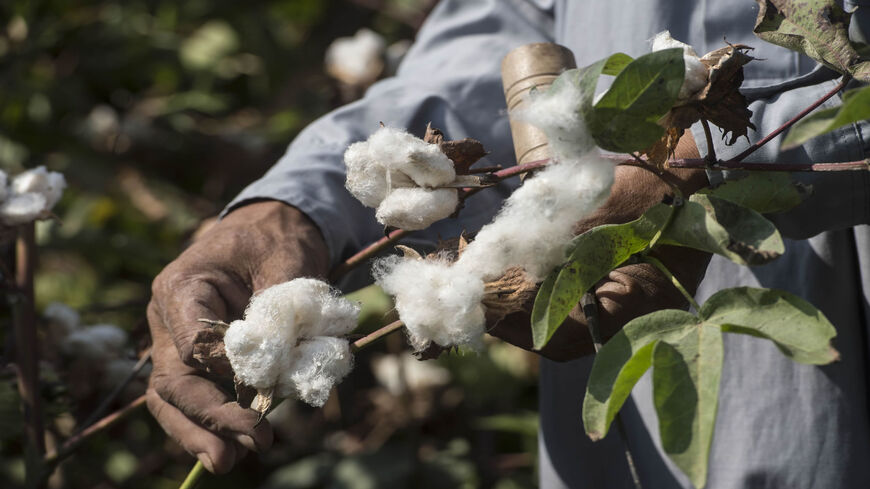 An Egyptian farmer works in a cotton field in the Nile Delta town of Kafr el-Sheikh, Egypt, Sept. 13, 2018. - Khaled Desouki/AFP via Getty Images

CAIRO — Despite the Russian war on Ukraine and its negative repercussions on global trade, Egypt succeeded in exporting 50,000 tons of cotton by the end of February, i.e., up to 75% of its production this season, estimated at 62,000 tons. The exports amounted to 5 billion Egyptian pounds ($274 million), an increase of 1.3 billion pounds ($71.2 million) compared to the same period last year, which witnessed exports worth 3.7 billion pounds ($203 million), according to data from the Cotton Arbitration and Testing General Organization.

The cotton production season in Egypt begins in April and extends until August; the export season extends from October until March.

It seems that Egypt benefited from the increase in global energy prices and the lack of global cotton production as a result of Russia's war on Ukraine, making the demand for Egyptian cotton high. This has contributed to an increase in Egypt’s agricultural export revenues and thus supporting its national economy.

On Feb. 24, Russian President Vladimir Putin announced the launch of a military operation to invade Ukraine, which had a severe impact on global trade and caused a significant rise in energy and oil prices. This was largely reflected in the fuel price hike.

According to the Central Agency for Public Mobilization and Statistics (CAPMAS), Egypt’s cotton export contracts for the year 2021-22 recorded until the first half of March about 2,918 tons, bringing the value of export contracts since the beginning of the export season to 52,700 tons, which is equivalent to 1.054 million kantars (official Egyptian weight unit for measuring cotton).

The contracts’ value stood at 5.2 billion pounds ($285 million), with China and India being the main importing countries of Egyptian cotton in the world markets, according to CAPMAS.

In a statement in December 2021, the Egyptian government’s media center said that Egypt attaches great importance to developing the spinning and weaving sector of cotton to compete on international markets, which would contribute to supporting the national economy, meeting the local needs and increasing exports.

Egypt’s efforts, the statement continued, reflect in the ongoing endeavors to establish integrated entities for this strategic industry, and to double production capacity through restructuring companies and developing cotton gins.

According to experts and observers contacted by Al-Monitor, Egyptian cotton exports benefited greatly from the war in Ukraine and the conflict’s impact on prices, resulting in higher revenues for Egypt. Cairo also benefited from the lack of cotton production in the world, a development that could play into Egypt’s hands, according to experts, and restore its 1980s golden age of cotton production.

Mufreh el-Beltagy, former head of the Alexandria Cotton Exporters Association and current head of Misr El Amreya for Spinning and Weaving in Alexandria, told Al-Monitor over the phone, “This year witnessed a significant shortage in the production of cotton crops worldwide, especially American cotton that competes with Cairo.”

“This is not to mention the Russia-Ukraine war, which led to a hike in prices of commodities. This resulted in an increased demand for Egyptian cotton in foreign markets, which contributed to achieving high revenues for Egypt this year,” he said.

Beltagy criticized the absence of a stable agricultural policy in the country, notably for cotton crop production in accordance with the requirements of global and local markets.

“In order to maximize the added value of Egyptian cotton and the industry, several mechanisms are in place, mainly developing the spinning and textile industry in a bid to increase Egyptian exports and create more job opportunities to reduce unemployment and increase Egypt's national income,” he noted.

However, he does not believe that the cotton crop cultivation in the country will be expanded significantly in the coming years.

“We have only 200,000 acres of land that is cultivated with cotton, given the limited agricultural areas in the country. Vertical expansion, however, could be the solution by planting high-productivity crops in the same area. There is also a need to raise awareness among farmers about modern agricultural methods and pest treatment, which could have positive impacts on growing production, increasing exports and benefiting from the local textile industry,” Beltagy said.

Adel Amer, head of the Egyptian Center for Economic and Social Studies, told Al-Monitor, “The increase in Egyptian cotton export revenues over the last year is a promising and encouraging matter for the state to proceed vigorously with the development of this product to make a breakthrough in global markets and achieve record revenues every year to support the national economy, and restore Egypt’s golden age in this field.”

He said, “Cotton exports generated high revenues this year and were not negatively affected by the war between Moscow and Kyiv. On the contrary, Egypt was able to take advantage of rising prices worldwide, and lack of supply of competing American products, which led to an increase in demand for Egyptian cotton.”

Amer added, “A part of the cotton exports were contracted before the outbreak of the Russian war on Ukraine, which did not affect the demand for the Egyptian product. This reflects the extent of international confidence in Egyptian cotton, its high quality and its ability to compensate for the shortage in the global market.”

Hussein Abu Saddam, head of the Farmers Syndicate, expressed his optimism about the high revenues of cotton exports this year.

“I believe this is the first step toward restoring the golden age of Egyptian cotton of the 1980s. Back then, production exceeded 8 million kantars. This might be possible today, especially in light of the great interest that the Egyptian government has shown in this sector after two decades of neglect,” he told Al-Monitor.

He added, “The state must encourage farmers by providing high-production seeds, offering an appropriate price to buy the product and paying attention to marketing it locally and globally through a clear vision and a good study of the global and local markets in order to increase production and exports abroad, as was the case during the 1980s."

Abu Saddam pointed out that the shortage of cotton crops worldwide “played into Egypt’s hands." He concluded, "The Russian war did not affect the country’s cotton production. On the contrary, high revenues were achieved compared to last year.”