Is there an Egyptian cotton conspiracy?

Amid arguments chalking it up to global conspiracies and others to poor government management, Egypt’s cotton industry is on the decline, further crippling the country’s textile industry. 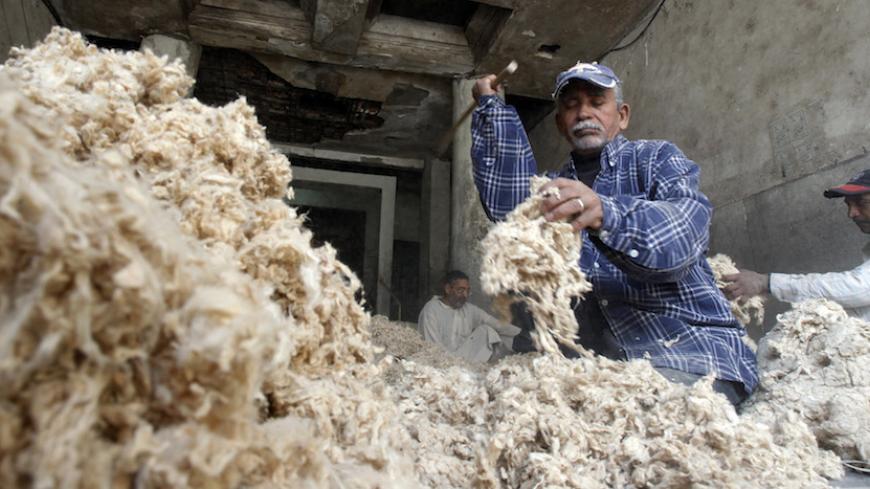 A cotton worker is pictured along a street in old Cairo, Nov. 27, 2010. - REUTERS/Amr Abdallah Dalsh

CAIRO — “There is a global conspiracy behind its disappearance.” This is a common justification reiterated by Egyptian industrialists and officials to explain the decline in the country's cotton economy. Egypt was previously a world leader in cotton production, its economy based upon this sector, with cotton bringing in foreign currency, as it was considered the most valuable cotton in the textile industry.

Despite the importance of this unique Egyptian crop, successive Egyptian governments have failed over the last 20 years to reform its production. Cities such as El-Mahalla el-Kubra and Kafr el-Dawwar depend entirely upon this sector, for which former President Gamal Abdel Nasser set up large textile factories that have now stopped operations, such as the Misr Beida Dyers and Misrayon & Polyester Fiber Co. This crisis threatens 1.2 million Egyptians and has led to losses of 1.8 billion Egyptian pounds ($235 million) in 2014.

Several unions, like the Textile and Weaving Union in Egypt, assert that there is a global conspiracy to ruin the Egyptian textile industry in order to benefit the imported clothes industry. Yet successive Egyptian governments’ policies have abandoned support for cotton farmers, while many countries, such as India and Turkey, provide up to 30% subsidies to this industry.

The Egyptian government currently aims to limit the cultivation of Egypt's extra-long staple cotton, which Egypt used to boast globally as the best type of cotton. To justify its decision, the Egyptian Ministry of Industry claims that the demand for this type of cotton has dropped and accounts for only 3-5% of the global market’s needs.

Mohammad Barghash, head of the Egyptian Farmers Union, talked about the dimensions of this global conspiracy. He told Al-Monitor that five countries are behind the conspiracy against Egyptian cotton: Pakistan, Bangladesh, the United States, China and India. Spearheaded by the United States, according to Barghash, these countries are filling the Egyptian markets with low-quality and cheap cotton to expel Egypt from the cotton industry.

He said that Egypt is well aware of this reality and that the United States subsidizes each cotton acre with $700 and stands watching. Meanwhile, Egyptian farmers have a million quintals of cotton that they cannot sell because of dumping.

Barghash said that the state’s agricultural policies will lead to dire consequences for all Egyptian crops, including cotton.

Barghash said: “Is it possible that Egypt appointed 10 ministers of agriculture between 2011 and 2015 — an average of five months in office for each minister? Is it possible that 51 million Egyptian farmers were threatened to be thrown out of the field of agriculture because of the Ministry of Agriculture's failed policies, which spell disaster in the Egyptian food security sector in the coming period? Egyptian gins that separate cotton from its seeds are being sold. As a result, 60% of lands accommodating these gins have been transformed into spaces for real estate."

According to Mahmoud el-Qalyoubi, former head of the Chamber of Textile Industries, the decline in the quality of Egyptian cotton due to erroneous agricultural techniques constitutes one of the main reasons for the collapse of the textile industry. The matter has nothing to do with conspiracies. Qalyoubi noted that the Ministry of Agriculture's faulty policies led to the rise in the cost of harvesting cotton crops, as they are hand picked. The cost of harvesting cotton crops by hand alone totals 30% of the overall expenses of the crops — a high cost when compared to American cotton crops that are harvested mechanically. The process costs only 10% of crop expenses in the United States. The return on Egyptian crops dropped to 5 quintals, while it witnessed an increase to 16 quintals globally.

Qalyoubi added that harvesting cotton crops mechanically requires the introduction of genetic engineering into cultivation and the use of developed irrigation methods. The crops should all be at an equal height from the ground so as not to waste any cotton when harvesting.

He explained that the fragmentation of agricultural land that began in President Nasser’s days led to a decrease in production because the use of modern agricultural systems and irrigation requires large spaces.

“The Egyptian cotton deterioration, be it in production itself or in the high cost of production, has largely impacted the textile and yarn industry in the absence of an imported alternative. In the event that cotton is imported, the price will be set by the Ministry of Agriculture and won’t represent its global price,” Qalyoubi said. Egypt has grown accustomed to exporting long staple, high-quality cotton and importing cotton of poorer quality for textile companies.

“Despite all of the above, the exports of the Egyptian textile industry, whether clothing, furniture or yarn, account for $3 billion. Egypt also exports to the European market and the US, which are two of the most meticulous markets in terms of quality standards. The value of exports can be doubled if the root problem related to fixing the cotton cultivation system is resolved,” Qalyoubi said.

“Officials should know that the cultivation of cotton and the textile industry are two issues with social and economic dimensions. The textile industry employs many workers. Therefore, failure to resolve its problems may lead to serious social consequences,” he added.

Pharaohs called Egyptian cotton “white gold.” Meanwhile, nobody knows how long their descendants will keep up the global conspiracy theory to avoid facing their failure to reform Egypt’s cultivation system and the agricultural policies in the country as a whole.