The Egyptian government has announced a new trading system for cotton, which would be sold through public bidding, raising the ire of farmers who already suffer from severe losses. 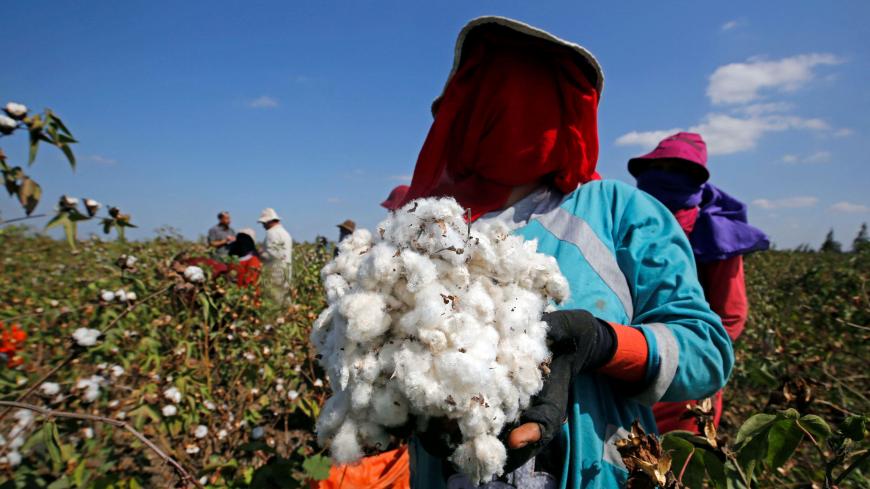 A farmer shows cotton in a field of San el-Hagar village, in the province of Al-Sharqia, Cairo, Egypt, Oct. 18, 2016. - REUTERS/Amr Abdallah Dalsh

In an attempt to restore the Egyptian cotton’s global standing, the Egyptian Ministry of Public Business Sector unveiled June 30 a new cotton trading system in Egypt that will be piloted in Fayoum and Beni Suef governorates during the current harvest season. The system aims at overcoming the disadvantages of the previous trading system and achieving the highest returns for farmers.

In an Aug. 6 meeting with the heads of cotton trade companies from the private and public sectors to present the new trading system for cotton, Minister of Public Business Sector Hisham Tawfik explained that 17 centers to receive cotton from farmers directly — without an intermediary — will be designated in the governorates of Fayoum and Beni Suef. Cotton will only be received through identification cards and agricultural holding cards, to prevent any fraud by intermediaries.

According to the new system, special packs made of jute to protect the cotton from contamination will be made available to farmers in the first week of August at the new cotton centers, which are run by a subsidiary of the Cotton, Spinning, Weaving & Clothing Holding Company, Egypt's largest end consumer.

Tawfik further said that sales will be made through public bidding based on the global price in the cotton exchange market.

Under the old system, the government would set a fixed price for cotton. In 2018, the price of one kantar (99 pounds) of cotton in the Nile Delta was set at 2,700 Egyptian pounds ($163) and 2,500 Egyptian pounds ($151) in Upper Egypt. Farmers complained about those prices, describing them as “unfair” as they do not cover production.

Yet still, the new system was not enough to quell farmers’ anger. Farmers claim the decision would completely destroy the cotton industry, and that it will make farmers suffer even more than they already have in the past few years.

Sayyed Rabie, a cotton trader in Beni Suef governorate, stressed that the success of the new system in restoring the global standing of the Egyptian cotton depends primarily on state intervention to protect the farmer and on imposing rigorous control. He also mentioned concerns that private companies would manipulate cotton prices and reduce its purchase cost from farmers, which would lead farmers to abstain from cultivating it, just like what happened in the past five years.

He told Al-Monitor that the new cotton trading system will act as a commodity exchange, and the price will change on a daily basis, following the global market trends that are now difficult to determine.

In May, the Central Agency for Public Mobilization and Statistics issued the annual cotton bulletin for the second quarter of the agricultural season 2018-19, stating that the total cotton exports reached 3,579 metric kantar during the period extending from December 2018 until February 2019, compared to 7,379 metric kantar during the same period of the previous season.

Head of the Egyptian Farmers Syndicate Hussein Abdel Rahman Abu Saddam confirmed the cancellation of the old mechanism under which the government set a fixed price to buy cotton from farmers. He said that buying cotton from farmers at the beginning of next season through public auction will destroy cotton cultivation and is unfair to farmers.

He also complained that the government has neglected farmers and the cotton industry, stressing the setback of cotton cultivation this year, which shrank by about 100,000 acres compared to last year.

On the farmers’ concerns over the new trading system, Mafrah al-Baltagy, a member of the Cotton Exporters Association, told Al-Monitor, “The bidding system will be difficult to apply. This is because the initial price before any bidding will be subject to ups and downs depending on the global market, which farmers in Egypt will not accept, especially if [global] prices decrease.”

He added, “Reviving the cotton industry requires its ongoing cultivation and exportation, coupled with the formation of a state fund. This fund would set a fixed price at the beginning of each harvest season, and in case the cotton global price decreases farmers will be compensated through this fund.”

Mohamed Saad Temraz, a member of the parliamentary Committee of Agriculture and Irrigation, said that Egyptian farmers suffered a great deal of frustration this year, and such a decision will push farmers to stop cultivating cotton crops.

He told Al-Monitor, “Last year the government demanded farmers to plant 250,000 acres of cotton and promised them to take this cotton at a guaranteed price of 3,000 pounds [$181] per kantar. When the harvest was due, farmers were confused because the government did not live up to its promise [as it set lower prices] and the farmers were unable to sell it.”

Temraz noted that some farmers have not been able to sell last year’s crops so far, stressing that this decision is a premeditated measure aimed at discouraging the Egyptian farmers and depriving them of their livelihoods.

Abu Saddam said that Egypt, which was planting 2 million acres of cotton in the 1950s, could not manage to market the production of 236,000 acres in 2019. The government did not fulfill its previous promises to buy cotton from farmers at the guaranteed price it had set, and this was in violation of Article 29 of the constitution, which stipulates that the government commits to “buying basic agricultural crops at appropriate prices to achieve a profit margin for farmers.”

He noted that brokers and traders took advantage of the government’s failure to buy cotton from farmers and bought it themselves at low prices. This has pushed many farmers to abstain from growing cotton this year, thus threatening the future of Egyptian cotton cultivation.

Abu Saddam added that Egypt was the world’s greatest producer of white long-staple and extra-long cotton, until the issuance of Law 210 of 1994 to liberalize the cotton sector, which led to significant losses for textile companies and drowned them in debt, due to the increase in cotton prices as a result of price liberalization at that time. Moreover, the state gradually neglected cotton cultivation and started to export raw cotton at the lowest prices to countries where it is manufactured and reexported to Egypt at skyrocketing prices.