Why Egypt's 'white gold' production is now in decline

Egyptian cotton exports take another thumping in the latest agricultural season, and local cotton consumption drops as cotton cultivation becomes too heavy a financial burden for Egyptian farmers to bear. 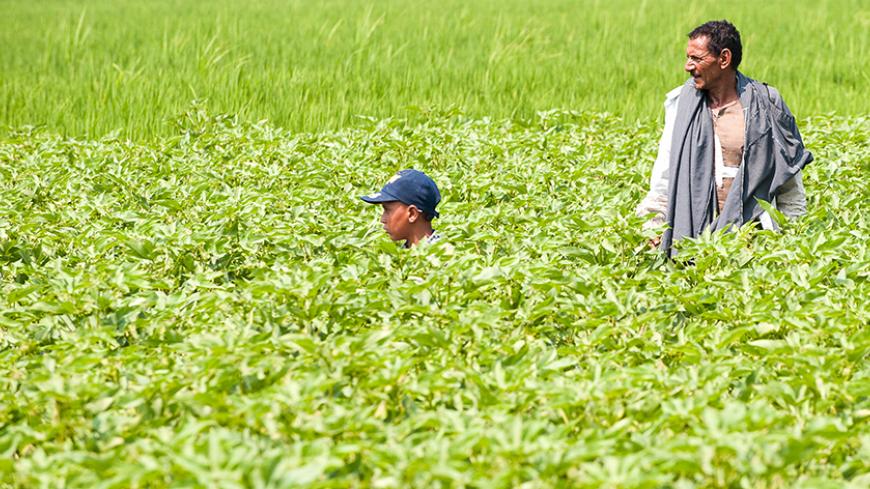 A child and farmer stand in a field of extra-long staple "Giza 88" cotton in Shubra Kheit in Beheira governorate, north of Cairo, Egypt, July 29, 2015. - REUTERS/Shadi Bushra

Egyptian cotton exports receded by 54.2% during the second quarter of the 2015-2016 agricultural season (December 2015 to February 2016), dropping to 11.2 million pounds compared to 24.4 million pounds during the same period in the preceding year, according to recently released data. In a June 13 statement, the Central Agency for Public Mobilization and Statistics (CAPMAS) also noted that the local consumption of cotton has dropped from 17.4 million pounds to 7.6 million pounds because some textile factories had ceased production.

The Egyptian government had agreed to buy cotton from farmers at the price proposed by the Ministry of Agriculture — which ranged from 1,100 Egyptian pounds ($124) to 1,250 Egyptian pounds ($141) per kantar, a unit equal to roughly 100 pounds — in an attempt to encourage them to cultivate cotton.

El Sayed Abd al-Aziz, a farmer from Kafr el-Sheikh, one of the Nile Delta governorates, told Al-Monitor that cotton cultivation has become a burden to farmers, as the production of 1 acre of cotton can range between 5 and 7 kantars — when the price of a kantar does not exceed 1,100 Egyptian pounds — while the cost of cotton cultivation exceeds 6,000 Egyptian pounds ($676) per acre, which does not provide the farmer with a profit margin to cover his needs.

Abd al-Aziz said that cotton cultivation in Egypt began to collapse during Yusuf Wali’s tenure as minister of agriculture (1984-2004), when his term witnessed a gradual disappearance of the pure Egyptian seeds that were mixed with Indian and American types with a lower productivity and quality. Abd al-Aziz blamed the Agricultural Research Center’s researchers and agricultural inspectors for neglecting their roles in conducting research either on the Egyptian or alien seeds. Therefore, he said, most of the cotton types that are being cultivated don’t have the ability to resist diseases and climate change.

Abd al-Aziz emphasized that most farmers face challenges in marketing their crops due to the abating role of agricultural societies in collecting and setting a fixed price for cotton, let alone the emergence of parallel markets where some merchants control the cotton prices. He expressed his view that the government must support the farmers through all stages of cotton production, i.e., provision of seeds and production necessities, periodic follow-ups, extension services and collecting and marketing.

The head of Egypt’s Farmers Union, Farid Wasil, told Al-Monitor, “The lack of areas planted in cotton led to lower productivity — which in turn led to the decrease of the exports — while the value of the Egyptian cotton depreciated even in the local market.” Wasil indicated that the areas planted in cotton dropped from 3 million acres in the 1960s to 180,000 acres in 2015 and then to 90,000 acres this year with 30,000 acres allocated for obtaining seeds.

Wasil pointed out that the owners of the public sector’s textile factories have equipped their factories with machines that are incompatible with the Egyptian long-staple cotton, leading to a difficulty in marketing the crops locally. Therefore, he said, farmers turned to planting medium- and short-staple cotton. He also confirmed that recently Egypt has been importing certain cotton crops, while Egyptians had previously referred to domestic cotton as their “white gold.”

Last July, former Minister of Agriculture Salah Helal issued a decision banning cotton imports until 2.7 million kantars of locally produced cotton are marketed. However, the Cabinet canceled the decision a few days after it was issued so that the productive sectors and the textile and clothing industries were not affected negatively.

Wasil believes that a national committee formed to save Egyptian cotton did not bring along anything new since it was established in August 2015. He asserted that saving Egyptian cotton does not need a political committee. Rather, it needs an increase in the budget allocated for the scientific research conducted by agricultural research centers and agriculture schools in order to develop seeds with higher productivity that are resistant to diseases and weather extremes. This, Wasil added, will encourage farmers to grow cotton.

While acknowledging that the demand for Egyptian cotton has decreased, Eid Hawwas, spokesman for the Egyptian Ministry of Agriculture, blamed farmers for turning away from growing cotton in favor of rice, which is more profitable. This led to the decrease of the area planted in cotton, which in turn led to the decrease in productivity, he said.

Hawwas told Al-Monitor that the ministry has developed an emergency plan to save Egyptian cotton, indicating that the plan targets growing 1 million acres of cotton, including 500,000 acres allocated for obtaining seeds. Moreover, he expected the price of cotton to reach roughly 2,000 Egyptian pounds ($225) per kantar in the next season, arguing that this will encourage farmers to grow cotton.

Al-Basha Idris, head of the Exporters Division at the Cairo Chamber of Commerce, asserted that the Egyptian products, especially cotton, are still in demand in the international markets. Idris attributed the decrease in exports to the lack of productivity, not to inferior quality.

“Some types of Egyptian cotton are still reputable despite its low productivity,” he said.

Idris told Al-Monitor that cotton importers in India and Pakistan have expressed interest in buying the long-, medium- and short-staple Egyptian cotton. In addition, Idris called on those who are responsible for collecting the cotton from the farmers to pay more attention to the quality standards so that Egyptian exporters can market Egyptian cotton in international markets, especially in Europe.

“The bad policies of the government caused the collapse of cotton,” said Idris.

Seyam called on the Agricultural Research Center’s researchers to develop research in order to improve the quality of Egyptian cotton and raise its productivity to reach 10 kantars per acre. However, Seyam expected that the center will fail to take on this role because of its small budget, which was 3 million Egyptian pounds ($338,000) in the 2016-2017 budget. Seyam expected that the areas planted in cotton will continue to decrease until the cotton eventually disappears, indicating that farmers will turn to cultivating rice because it is more lucrative compared to cotton. In addition, Seyam said the most profitable agricultural cycle for farmers is growing wheat in the winter and rice in the summer with no place for cotton.

“I won’t cultivate cotton,” Seyam said, noting that he is not willing to make an unsuccessful investment on the lands he owns in Kafr el-Sheikh.