The production and export of Egypt’s most famous crop is seeing a revival after quality assurance measures are enacted. 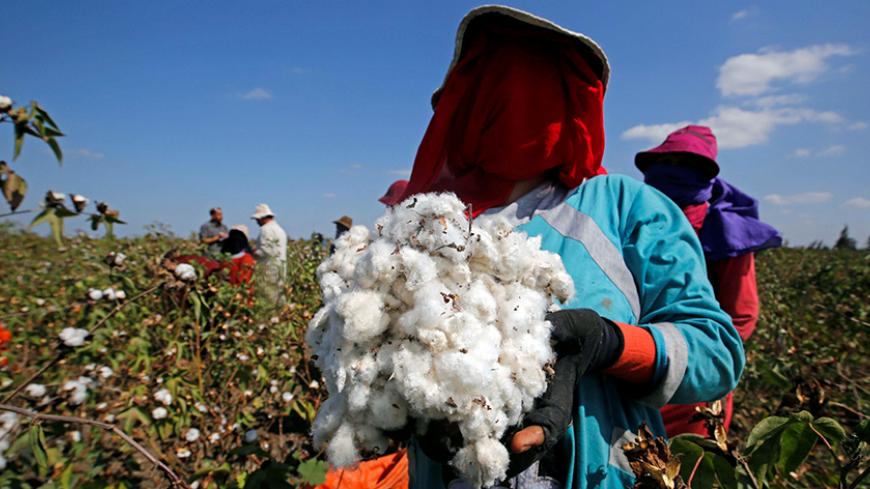 A farmer shows cotton in a field of San el-Hagar village, in the province of Al-Sharqia, Cairo, Egypt, Oct. 18, 2016. - REUTERS/Amr Abdallah Dalsh

Egypt’s famed cotton industry is starting to revive following a Central Bank decision to float the pound last November and a crackdown on false Egyptian cotton worldwide, the country’s farmers and exporters say.

The production and export of Egypt’s most famous crop have been hit hardest since the January 25 Revolution, which led to a security vacuum and looser regulations degrading the quality of the local cotton.

According to the state-run Central Agency for Public Mobilization and Statistics, Egypt’s cotton exports jumped by 63.9% during the first quarter of the planting season of 2016/2017.

In a February statement, the official statistics agency said that Egypt’s cotton exports were 202,500 bales in the period from September to November compared to 123,600 bales in the same period a year earlier.

Experts and farmers attribute the increase in the demand of cotton to record cotton prices in the marketing year 2016/2017 because of a devalued pound, which encouraged farmers to double the area planted with cotton, as well as a worldwide crackdown on fake cotton following a scandal of allegedly fake versions of the crop.

In August 2016, a US retail chain accused India’s textile manufacturer Welspun of using cheaper, non-Egyptian cotton in bed sheets and pillowcases. The Indian manufacturer acknowledged the accusations, admitting that some of their products were falsely labeled as 100% Egyptian cotton.

“The Cotton Egypt Association has been receiving requests from many manufacturers to license their Egyptian cotton logo. This has increased the demand for Egyptian cotton in the world market and is expected to continue as more companies get licensed,” Wael Alma, the association’s managing director, said.

The Cotton Egypt Association estimates that about 90% of global supplies of Egyptian cotton last year were fake.

In February, the Cotton Egypt Association signed an agreement with India’s Welspun to promote and market Egyptian cotton products worldwide after assessing its supply chains. Under the agreement, the two organizations agreed to work together to create programs for the promotion of the Egyptian cotton logo in the retail markets across the globe.

“The sheer nature of Egyptian cotton makes it a luxury to be cherished by all. Welspun wants the world to know about Egyptian cotton, and we want to help promote it among the consumers and the makers alike,” said Dipali Goenka, the CEO and joint managing director of Welspun India Ltd.

Economist Ahmed el-Shami said that if Egypt’s cotton industry returned to its previous glory, the economy would flourish, the spinning and textile industries would boom, and stalled factories would reopen.

“Egyptian cotton is an abandoned golden egg. If it is well-marketed across the world, it will inject billions of dollars into the state’s coffers and revive an economy in dire need of hard currency,” Shami told Al-Monitor.

In a March report titled “Egypt: Cotton and Products Annual 2017,” the US Department of Agriculture (USDA) forecasted that Egypt’s cotton area would double to 110,000 hectares and production would almost double and reach 340,000 bales in the marketing year (MY) 2017/2018.

“Several factors contributed to the rebound in Egypt’s cotton prices in MY 2016/17. These include a historical drop in cotton area and production, the floating of the Egyptian pound by which it weakened essentially 100% vis-a-vis the US dollar, and an increased demand for Egyptian cotton in international markets,” the report stated.

In the past two years, the Egyptian government has taken measures to restore seed purity and cotton quality. The government’s moves came as Egyptian cotton’s reputation and quality had deteriorated significantly due to the seed companies’ lack of effective quality assurance systems that resulted in inferior, mixed-variety output.

“This development has increased the demand and the prices for Egyptian cotton in the local and international markets and is expected to continue in MY 2017/2018,” the USDA report said.