Will government reshuffle stamp out corruption in Egypt?

Deficiencies in corruption reports and loopholes in the law make weeding out corruption in Egypt an optimistic scenario, to say the least. 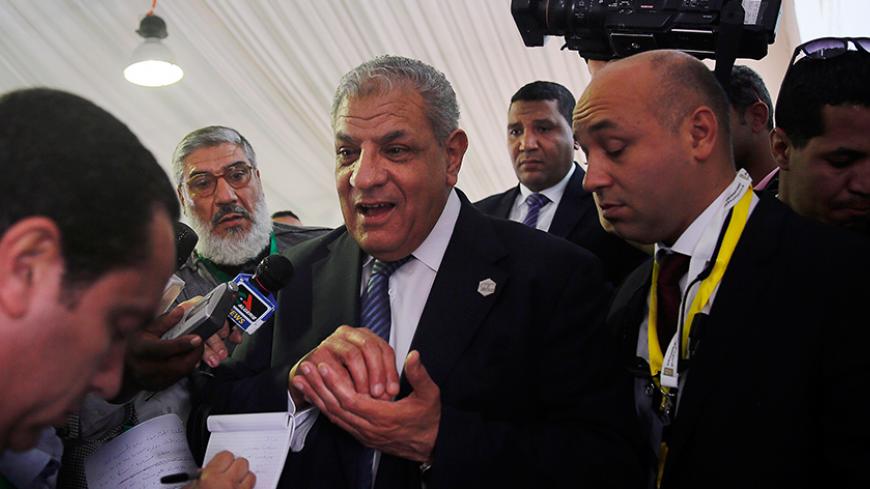 CAIRO — The dismissal of former Agriculture Minister Salah Helal, and his referral to the public prosecutor Sept. 7 on charges of accepting bribes to facilitate the takeover by businessman Ayman el-Gamil of 2,500 acres of state-owned lands in Wadi Natrun, sparked a debate about the Egyptian state's efforts to combat corruption.

In this context, Egyptian Prime Minister Ibrahim Mehleb submitted his Cabinet's resignation Sept. 12, and several analysts attributed the resignation to an order by President Abdel Fattah al-Sisi, based on the background of the abovementioned issue. However, the most pressing question remains whether corruption among ministers will end with the departure of Mehleb’s Cabinet.

The first indicator suggesting the continuation of corruption is that the same control authorities (Administrative Control Authority, Central Auditing Agency and Illegal Earning Authority) that examined the files of the candidates for Mehleb’s Cabinet — which was formed upon Sisi’s order after he assumed the position of president in June 2014 — were assigned to examine the CVs and files of candidates for ministerial portfolios in the Cabinet of Sharif Ismail, who was assigned by Sisi to set up a new Cabinet on Sept. 12 following Mehleb’s resignation. In this respect, the corruption activities by Helal may be attributed to the control authorities’ poor performance in investigating him, especially since he was a leading figure in the ministry in the era of former Minister of Agriculture Ayman Farid Abu Hadid in 2013, and numerous complaints were filed against Abu Hadid on charges of squandering public money and abusing his public position, which probably required further investigations into Helal’s possible connection to corruption as one of Abu Hadid’s former assistants.

In this context, Ahmed Sakr, representative of Transparency International in Egypt, told Al-Monitor, “It is difficult to examine the biography of candidates to the ministry since their careers extend over decades and it is difficult to discover these candidates’ corrupt activities since such corruption may take the simple form of mediating in favor of relatives to be assigned work or recruiting them in certain positions.” Sakr added, “It is also difficult to uncover financial corruption crimes committed a long time ago, given the accumulation of documents, files and procedures in governmental authorities in a way that makes it impossible to examine all transactions executed in one of these authorities under the supervision of a person nominated for a given ministerial portfolio.”

It is striking that Mehleb had joined the Egyptian Cabinet for the first time as minister of housing in the Cabinet of Hazem el-Biblawi — formed immediately after the overthrow of ousted President Mohammed Morsi on July 3, 2013. Back then, Mehleb — before becoming minister — had accusations leveled against him of financial corruption during his chairmanship of the board of directors of the Arab Contractors Company, in the era of former President Hosni Mubarak, when he was implicated in the case known in the media as the “Presidential Palaces Case.”

Moreover, Ahmed al-Zend — who assumed the Ministry of Justice on May 20 following the resignation of former Justice Minister Saber Mahfouz on May 11 — had been facing charges of selling land owned by the Judges Club branch in Port Said at a lower price to one of his wife's relatives. It is worth mentioning that Zend still serves as justice minister in the new Cabinet of Sharif Ismail.

Dotmsr news website wrote on Sept. 10 that it obtained reports by the Administrative Control Authority detailing Helal’s violations before his appointment of minister of agriculture, back when he served as head of the office of Abu Hadid. Should these reports appear to be true, they will confirm that the Administrative Control Authority did not fail and did indeed have some suspicions on Helal before he took over the ministry.

The foregoing indicates that it is likely that the president and the heads of government may be turning a blind eye to suspicions on ministerial candidates, even when such suspicions are included in the Administrative Control Authority’s reports. The probability that the same policy will continue seems to increase as Zend remains in office as justice minister.

In this respect, Saker said, “It is not permissible to exclude a specific person from the government for mere charges or suspicions.” For his part, Assem Abdel Moaty, director of the Egyptian Center for Transparency and Countering Corruption, told Al-Monitor, “There are no criteria for the selection of ministers. They are appointed based on personal trust between the ministerial candidate and the prime minister or president of the republic, even if this involves disregarding the reports of the Administrative Control Authority.” Moaty pointed out that figures suspected of being implicated in crimes of corruption must be excluded from the candidatures to government.

The control authorities do not get the credit for uncovering corruption in the Ministry of Agriculture; the media does. Al-Taawon newspaper wrote Feb. 17 that two businessmen, one of them affiliated with the dissolved National Democratic Party (in reference to Ayman al-Gamil, affiliated with the NDP), took over 2,500 acres in an area near Wadi Natrun called “the European Countryside.”

Moaty believed this is unlikely as long as control authorities lack complete independence from the president and the prime minister.

Loopholes in the criminal law on the fight against corruption led some legal experts and politicians to call for a special law on accountability of ministers. Such a law had already been applied under President Gamal Abdel Nasser during the political union between Egypt and Syria (1958-61) and was known as Law No. 79 of 1958. However, some procedural problems led to the freezing of this law after Syria’s secession from its union with Egypt in 1961.

Imad al-Faki, a professor of criminal law at Helwan University, told Al-Monitor, “The trial of ministers based on the criminal law is not enough since the loopholes in the criminal law may lead to impunity. This was the case of Mubarak and the men of the [NDP]. Therefore, trials must have a political dimension on the basis of which the accused are tried in case they evade the criminal dimensions.”

Al-Bawabah News quoted a source in the Legislative Reform Committee — which was formed by virtue of a decision of Sisi and headed by Mehleb to reconsider Egypt’s legislative system — as saying that the committee has drafted a special law on the trial of ministers, but said the draft has yet to be promulgated given what the newspaper described as political alignment for fear that many people would renounce those ministerial positions. This is how the law on the trial of ministers ended locked in the drawers of the Legislative Reform Committee.

Shortcomings in the control authorities’ reports persist, and so does the little attention the officials responsible for forming and approving the Cabinet give to those reports. The fact that the reports’ findings remain exclusively accessible to the president and the prime minister with only the media trying to uncover corruption, the enduring loopholes in the criminal law, and the lack of political trials, which allows for impunity of ministers, make the resurfacing of corruption a likely scenario.