What the Egyptian Cabinet reshuffle means

In a bid to revive his Cabinet’s role before addressing the parliament to earn confidence, Egyptian Prime Minister Sharif Ismail yielded to the parliament’s demands and announced a Cabinet reshuffle that included 10 portfolios. 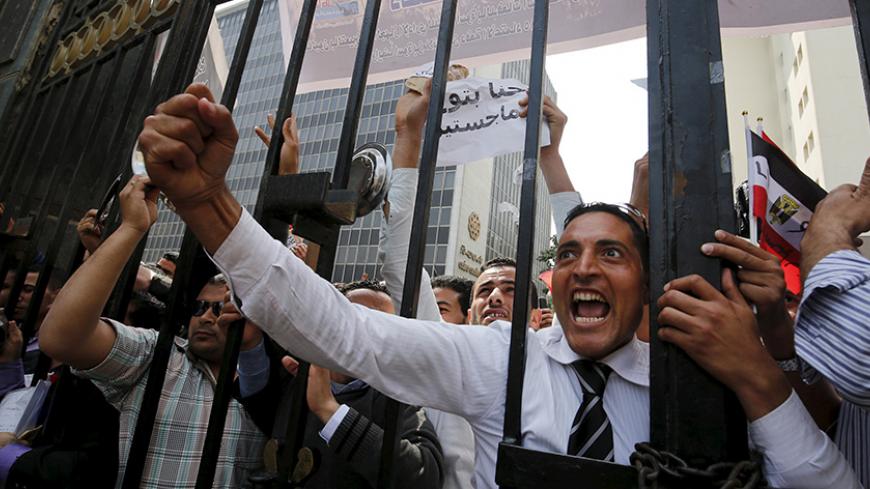 In an attempt to ease the public’s concerns, Egyptian President Abdel Fattah al-Sisi announced a Cabinet reshuffle on March 23. This move, the first since the formation of a new administration led by Sharif Ismail as prime minister on Sept. 1, 2015, included 10 portfolios chosen by Ismail to meet the members of parliaments’ demands after they had expressed their dissatisfaction with the performance of some ministers, especially in the ministries of finance and investment. The reshuffle was also a reaction to the current economic crisis that forced Egypt’s central bank to devalue the Egyptian pound by 14%.

The new appointments preceded Ismail’s statement on March 27, in which the Egyptian premier outlined his Cabinet’s future plan. It is worth noting that Ismail has recently been subject to accusations and criticism after calling for private meetings at his office with different parliamentary blocs for the purpose of discussing and setting prior agreements concerning the ministerial program before addressing the parliament to obtain trust for the Cabinet as per the new Egyptian constitution.

According to Article 146 of the Egyptian Constitution, the House of Representatives has the power to decide the future of the newly formed government within no more than 30 days of announcing the ministerial statement.

Some Egyptian politicians argue that by holding private meetings with the aim of lobbying certain members of parliament to pass the ministerial program, the prime minister is violating the constitution requiring him to present this program to the parliament in a general legislative session held for this purpose. Ahmad Nafadi, the spokesman of the Modern Egypt Party, said that by agreeing to take part in closed meetings with the prime minister before presenting his program to the parliament and granting him confidence, members of parliament are violating their oaths of office vesting the parliament with the power of overseeing the government.

Others, like parliamentarian Mustapha Bakri, interviewed by Al-Monitor, considered that such closed meetings are normal and a new parliamentary tradition imposed by the constitution to expand the Egyptian parliament’s powers to include outlining the government’s future policies.

Khaled Abdulaziz Shaaban, a parliamentary member who took part in the prime minister’s private meetings, told Al-Monitor that the recent Cabinet reshuffle came as a result of the pressure put by lawmakers, including him. Shaaban said, “We demanded a Cabinet reshuffle for the ministries that fail to achieve the desired results,” stressing that “the prime minister indeed sought to get our opinions on the ministerial program.”

Following the Cabinet reshuffle and before the official hearing of the ministerial statement at the parliament, several political parties represented in the parliament declared their support for Ismail’s Cabinet. Speaking on behalf of the Wafd Party members, Mohammad Fouad stated that the party’s stance on the ministerial statement was formed following these closed meetings that the party attended. Fouad added that the government reshuffle is in line with the party’s views.

On March 27, Al-Monitor attended the Egyptian parliament legislative session where Ismail read the ministerial policy statement, which included the government’s commitment to raising the economic growth rate to 5-6% by 2018 instead of the current 4.2%, reducing employment from 13% to 11%, boosting gross domestic saving (or percentage of the gross domestic product) from 6% to 10%, and increasing the investment share of the GDP to 18-19% instead of its current less-than 15%.

The ministerial statement also indicated that the upcoming period will see the adoption of the concept of “contained growth,” along with difficult decisions. The statement pointed to alternative approaches in dealing with the threats of the New Renaissance Dam on Egypt’s share of the Nile waters.

After the declaration of the ministerial program, parliamentarian Haytham Hariri told Al-Monitor, “Ever since its inauguration, the Cabinet has been serving the interests of the rich at the expense of the poor’s [interests]. Recently, its performance has not been encouraging enough for us to grant it trust.”

“Nevertheless, the Cabinet seems to be on its way to earning the parliament’s confidence after the Cabinet reshuffle that included economic portfolios and since no party has a parliamentary majority capable of forming an alternative Cabinet in the case of withdrawal of confidence,” Hariri said.

Political expert and president of the elections forum at Al-Ahram Center for Political and Strategic Studies Yusri Izbawi told Al-Monitor, “Article 146 of the new Egyptian Constitution put the parliament and the Cabinet in a difficult situation: On the one hand, the [prime minister] is concerned that the parliament will withdraw confidence from the government, and on the other, it is hard for members of parliament to do this as long as there is no party or bloc with a parliamentary majority and capable of forming another Cabinet.” Izbawi added, “The constitution stipulates the dissolution of the parliament in the event that they did not agree on an alternative Cabinet. For this reason, the prime minister opted for a Cabinet reshuffle instead.”

Meanwhile, Egyptians are living in anticipation of the new parliament’s step in light of its newly acquired constitutional powers that include outlining the government’s policy.