What makes Egypt’s budget so controversial?

Some members of Egypt’s parliament say the recently approved budget was passed hastily — on purpose — and doesn’t meet constitutional requirements. 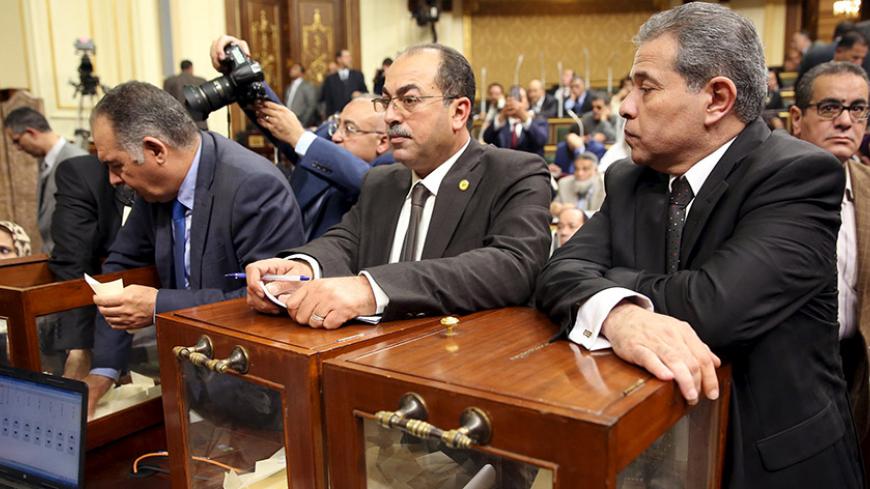 Tawfik Okasha (R) looks on during the vote to choose the head of Egypt's parliament in Cairo, Jan. 10, 2016. The parliament, meeting for the first time in more than three years, elected constitutional expert Ali Abdel Aal as its speaker. - REUTERS/Stringer

The Egyptian parliament approved the country’s 2016-17 general budget June 29 despite accusations that the legislation violates the constitution and contains figures that are not feasible.

Some members of parliament accused Speaker Ali Abdel Aal and the budget’s supporters of knowingly passing a bill that goes against several constitutional passages and sets unrealistic numbers for governmental expenditure rates in the health, education and scientific research sectors.

The constitution says the government must spend at least 3% of gross domestic product (GDP) on health care and at least 4% for primary education, 2% for higher education and 1% for scientific research.

Article 238 of the transitional and general provisions of the constitution passed in 2014 states, “The state shall gradually implement its commitment to the allocation of the minimum government expenditure rates on education, higher education, health and scientific research that are stipulated in this constitution as of the date that it comes into effect. It shall be fully committed to it in the state budget of the fiscal year 2016/2017.”

According to observers, Abdel Aal ignored the need for a legal quorum in the session for the budgetary vote and relied on “hand-raising” rather than electronic voting. Consequently, disputes broke out among parliament members and the session was suspended less than an hour after it started. When the vote finally was taken, it was done so in the absence of the Cabinet, which had sent only Minister of Finance Amr al-Garhy and Legal and Parliamentary Affairs Minister Magdy al-Agaty as representatives.

Despite the alleged constitutional violations and manipulation of some numbers and figures in the budget, as per the statements of several parliamentarians who opposed the approval, the parliament sent the bill to President Abdel Fattah al-Sisi to issue it before July 1 and publish it in Egyptian Official Gazette.

Responding to the people doubting the budget’s constitutionality, Abdel Aal said, “The State Council’s opinion in this regard is enough response to settle the disputes over the budget.”

Wages constitute 228 billion Egyptian pounds in the budget, while debt service is set at 292 billion pounds and support, including social protection programs, receives 210 billion pounds. These three provisions alone account for almost 80% of the total budget, leaving only around 20% for everything else, including education, health and infrastructure.

But parliament member Sherif Ismail had anticipated the challenge and held an expansive meeting June 28 with the heads of the parliamentary committees to convince them to approve the budget. He also promised that the government would take into consideration some recommendations from opposing party representatives.

Mohammad Fouad, an Al-Wafd member and a member of the parliament’s Economic Committee, told Al-Monitor his party now approves of the general budget with all its inclusions. But he noted the need to review the following on a quarterly basis: the revenue amount, which always drops more than the rates set by the government in the budget; tax policies; fiscal deficit; financing the deficit; and spending priorities.

Only the 25-30 Alliance persisted with its rejection of the general budget, and its parliament members held a press conference a few hours before budget discussions began. They emphasized their belief that the budget violates the constitution and the government is manipulating figures to deceive the people.

In this framework, 25-30 Alliance parliament member Haitham al-Hariri asserted during the press conference that the party’s rejection of the budget stems mainly from its failure to adequately fund the health and education sectors. He insisted that 96 billion pounds should be allocated for the health sector.

In a statement to Al-Monitor, Hariri sharply criticized the way the general parliamentary session was mediated during the budget discussion. The three minutes allotted for each parliament member to speak was not enough. He described the discussion as “hasty.”

He added that he had asked Abdel Aal to conduct an electronic vote on the budget but was refused. Hariri said people have the right to know the vote tally and how parliamentarians voted.

According to Hariri, the budgets of several hospitals that are not accessible to the general public were added to the health budget to manipulate numbers. He cited the police and army hospitals as examples. The constitutional text aims at allowing all Egyptians, without discrimination, access to the health-related budget, he noted.

The Egyptian Institution for the Protection of the Constitution, headed by Amr Moussa, a former presidential candidate and head of parliament’s 50-member Constitutional Committee, issued a statement June 22 warning against the unconstitutionality of the budget bill. Though it was not heeded, the institution demanded that the budget appropriate the percentages of funds required by the constitution and that parliament work on providing the necessary resources to ensure complete commitment to the percentages.