Morsi Is Not Arab World’s Mandela

In response to Tawakul Karman's recent article in Foreign Policy, Bassem Sabry and Hani Sabra write that Mohammed Morsi is no Nelson Mandela. 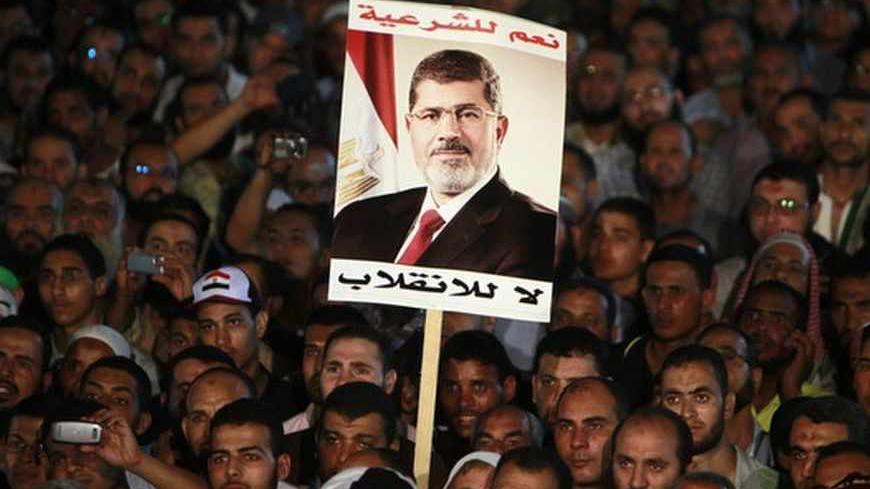 Supporters of deposed Egyptian President Mohammed Morsi hold up a poster of Morsi during a protest at Rabaa al-Adawiya Square in Cairo, Aug. 6, 2013. The poster reads, "Yes to legitimacy, no to the coup." - REUTERS/Mohamed Abd El Ghany
August 12, 2013

Tawakul Karman is a brave press-freedom advocate and a worthy Nobel Peace Prize winner. She was a powerful voice in the Yemeni people’s struggle against President Ali Abdullah Saleh’s 34-year autocracy and remains an important figure in Yemen’s march toward democracy. However, Karman’s recent comparison of deposed Egyptian leader Mohammed Morsi to Nelson Mandela, one of the most influential and inspirational figures of the latter half of the 20th century and whose name is synonymous with courage, struggle and wisdom, is astoundingly wrongheaded. Mandela remains a global moral authority. Morsi is not worthy of such praise — not even close. If the defining feature of Mandela’s presidency was the unification of his people, the defining feature of Morsi’s one-year presidency was the intensifying and perilous polarization of the Egyptian people.

This is not a personal attack on Karman (though there is, regrettably, a deluge of unproductive and troubling ad hominem bullying on social media), but a disagreement about a bold and false assertion. Karman is certainly free to defend the former president and criticize the wisdom of the military’s decision to oust him and express serious concerns about the current trajectory of democracy in Egypt. And there is indeed, most certainly, ample cause for concern.

However, equating Morsi with Mandela is myopic, cynical and betrays a deep misunderstanding of Morsi’s brief presidency and Mandela’s long struggle for freedom. Mandela is everything Morsi is not. Following a career as an anti-apartheid revolutionary and almost three decades of imprisonment before his election, then-President Mandela moved swiftly to heal the deep rifts that plagued South African society. He led a national unity government and oversaw the establishment of the Truth and Reconciliation Commission that, despite criticism, succeeded in turning the focus of the country toward the future. Mandela was not perfect, but he proved particularly adept at taking the long view, at understanding the symbolism and impact of each of his actions, and he consistently strived to build bridges and create consensus without losing sight of his principles.

Morsi, on the other hand, is a member of a group that has at best a questionable commitment to and a skewed understanding of democracy, and that — following a razor-thin electoral margin — moved quickly and aggressively to consolidate power. Mandela was a visionary, while Morsi was a short-term tactician who refused to see the benefits of building and reinforcing coalitions. A telling and ironic example was his approach to security-sector reform. Morsi could have begun to reform the feared security apparatus had he at least maintained the electoral coalition that ushered him to power, and would likely have succeeded if he had broadened it. Today, that apparatus, which he heaped praise upon when he believed he could eventually bring it under his control, is being used against him and his supporters. Additionally, Mandela was — and remains — a popular national leader, earning the respect and admiration of even his one-time critics and affectionately referred to as “Tata,” meaning “father.”

While Morsi still maintains a bloc of support, prior to his ouster this support base was shrinking as a result of his bullheaded approach to leadership and his insistence on maintaining an inept cabinet that even spokesmen in his own party rejected. In fact, by the end of his first year in office, his list of critics included the Nour Salafist Party, the media, the judiciary, civil-society activists, the police, the military, the leaderships of Al-Azhar and the Christian church and very likely a majority of the population. Essentially, Morsi’s very legitimacy was rapidly deteriorating.

None of this was foreordained. When Morsi was first elected, many Egyptians believed that he was cognizant that his narrow margin of victory was largely a result of the support of millions of non-Islamists that didn’t necessarily trust him, but who wanted a clean break from the era of deposed president Hosni Mubarak. These same people pinned their hopes on the belief that the broad January 2011 “revolutionary coalition” would remain intact and thus were willing to give him the benefit of the doubt. Even many others that didn’t vote for him also were willing to suspend their pessimism and hoped to be positively surprised.

However, to say that Morsi proved to be a disappointment would be an understatement. His government made little progress delivering the “bread, freedom and social justice” its slogans promised. And less than five months after his inauguration, Morsi squandered his political capital when he committed a disastrous strategic blunder that would permanently dissolve the coalition of supporters that brought him to power, severely damage his legitimacy and mark the beginning of his downfall. Morsi’s infamous November 2012 presidential decree, which established him as above the law and forcefully installed a political ally as prosecutor-general, was ultimately used to ram through a divisive constitution. The bloody clashes that followed and the sequence of events that ensued left Egypt dangerously polarized and the January 2011 revolution in tatters.

In her piece, Karman says that she originally supported the June 30 anti-Morsi protests (despite her allegiance to a Muslim Brotherhood-affiliated party in Yemen), because she wanted to see the end of “the rift within Egyptian society, and building a country led by partnership rather than narrow majority rule.” Karman, whose sincerity we’re not questioning, therefore clearly recognized that Morsi did not take a Mandela-like approach to leadership. She made passionate references in social media supporting the June 30 protests, stating that the “Revolutionary legitimacy is in Tahrir, and is stronger and greater than any [other] legitimacy,” pointedly criticizing the Brotherhood and calling on Morsi to resign. While committed to political inclusiveness, she even appeared not to be averse to the notion of the military ousting Morsi and creating a presidential council while suspending the constitution. All of this makes Karman’s sudden heaping of praise on Morsi incomprehensible and incompatible.

Remarkably, following her previous sharp criticism, Karman now presents a broadly positive and democratic image of Morsi’s tenure that contradicts her previous positions. She writes that during his year in power, for example, freedom of speech was guaranteed. This is demonstrably untrue. Numerous “insulting the presidency” cases were filed during Morsi’s year in power, including some by the president's office itself before it withdrew them under local and international pressure. Quite tellingly, the Brotherhood dominated the legislature and ignored the calls by pro-revolutionary forces for the repeal of these laws. And instead of liberating state-owned media from political influence, Morsi and the Brotherhood instead worked to increase their influence over it.

One need not be a Morsi supporter to be critical of much of what is taking place in Egypt. One is free to argue Morsi that was a dangerous leader who was taking Egypt down a dark path, or alternatively that he was an elected president that was unfairly ousted by a military seeking political power, or take a position somewhere in between. However, one thing is certain: Mohammed Morsi is not the Arab world’s Nelson Mandela.

Hani Sabra is a New York-based political analyst. The views represented here are his own. On Twitter: @hanisabra

Bassem Sabry  is an Egyptian political writer and commentator. On Twitter: @Bassem_Sabry