Egypt reacts to the news of Negm, Mandela, Sisi

Egyptian reactions to the deaths of Ahmed Fouad Negm and Nelson Mandela, and the announcement of Abdel Fattah al-Sisi win in TIME's reader poll for "Person of the Year," reflect the complexities of Egypt's political culture. 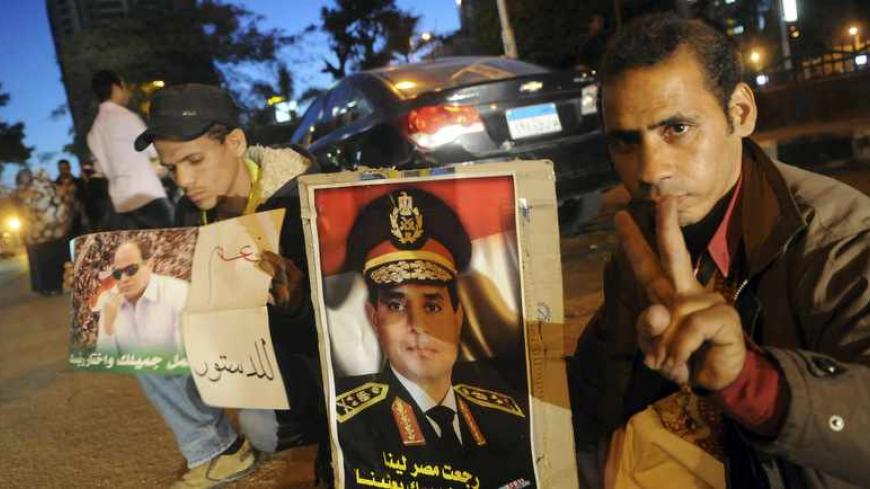 Egyptians hold pictures of Gen. Abdel Fattah al-Sisi during a protest against what they say is Qatar's backing of ousted Egyptian President Mohammed Morsi's government, outside the Qatari Embassy in Cairo, Dec. 6, 2013. - REUTERS/Stringer

Two great losses and one poll summarize Egypt’s current struggle in a nutshell. The widespread mourning following the death of Egyptian poet Ahmed Fouad Negm; the sorrow in Egypt for the passing of iconic South African leader Nelson Mandela; and the massive voting campaign that ultimately led Gen. Abdel Fattah al-Sisi, Egypt's armed forces chief, to win TIME's reader poll for 2013 "Person of the Year" collectively epitomize the contradicting and often hypocritical Egyptian stances that have contributed to their ongoing misery. A quick glance at the three — Negm, Mandela and Sisi — gives us some insight into the Egyptian inability to overcome the pitfalls of their rough path to freedom and democracy.

Negm, the legendary “poet of the people,” with his little formal education and his writings in colloquial Egyptian Arabic, clicked with with many Egyptians. Negm became a symbol of what Egyptian identity truly means. Nonetheless, the fascination with Negm did not have a deeper influence on many of his fans.

Negm’s legacy is not revealed only in his revolutionary poems, but also in his non-hypocritical style. He was the poet of the poor who remained faithful to his principles and refused to be exploited by wealth or fame: "No one can co-opt or seduce me, because I want nothing," Negm said in 2002. However, Negm’s admirers are not all poor; many wealthy individuals adore him, yet they consistently fail to translate their passion for Negm’s ideas into real action that would help alleviate the country’s grinding poverty and inequality. Their support for the revolution’s slogan “Bread, Justice and Freedom” has turned out to be empty — just hollow words used to gain clout and fame. Very few have genuinely believed in these values and tried to translate them into reality. Those few paid with their lives or were seriously injured in protesting for their principles, while others were either preoccupied by political infighting or completely indifferent.

As described by the Prince Claus Awards, Negm was “liberal and open-minded.”  Now, who can truly be described in Egypt as a liberal and open-minded? Honestly, very few. This is essentially the core issue behind Egypt’s struggle. The Islamists in Egypt have refused to adopt many of the liberal values enshrined in the Quran, which is precisely why they have failed to win the wider public. Non-Islamists have often embraced illiberal values in their quest to fight political Islam. Both, in fact, are illiberal forces that exploit and flex democratic values in an obtuse fight for dominance.

The fascination with Mandela in Egypt is not new. It started during his first visit to Cairo in 1962 when he expressed admiration for Nasser’s “political reforms.” However, that was young Mandela, the believer of an armed struggle. Mandela later succeeded in reinventing himself and embracing reconciliation instead of violence. He inspired the world in 1995 by saying, "Reconciliation means working together to correct the legacy of past injustice." This was Mandela’s true legacy — one that is conveniently ignored by many of his Egyptian lovers who have been locked in a vindictive, uncompromising battle since the fall of Hosni Mubarak’s regime.

The word “reconciliation” is a dirty word in Egypt. People are instead fascinated by revenge and blame games. When Islamists rushed to label former President Mohammed Morsi as the Mandela of Egypt, they ignored his flawed policies and inability to heal the rifts within Egyptian society. On the other hand, many of Morsi’s opponents, who rallied against him on June 30 and cheered his ousting by the military, have proven equally hypocritical. Most have rejected reconciliation efforts and have even endorsed the new restrictive assembly law under the pretext of restoring stability.

Since his rise to fame after July 3, Gen. Sisi has, undoubtedly, seriously influenced Egyptian society. He is now very popular, as indicated by Egyptians voting for him in TIME's "Person of the Year" poll. However, this popularity begs the question: How can Sisi’s popularity continue despite growing signs of oppression?

The answer is partly based on the nature of his opponents. As stated earlier, Morsi was not a Mandela for Sisi to be Egypt’s Frederik Willem de Klerk. The Muslim Brotherhood and their supporters not only wasted a golden opportunity during Morsi’s tenure, they have continued failed policies after his ousting by refusing to admit their past mistakes or acknowledge their loss of legitimacy in the eyes of many Egyptians. They also continue to scapegoat Copts and accuse them of standing behind the coup.

On the other hand, Sisi’s popularity is partly due to the lack of role models who have the collective ability, sincerity and vision to inspire the public. Activists such as Ahmed Maher and Alaa Abdel Fattah are indeed popular among social media followers. However, they fail to be role models for the wider political public, which is why their arrest failed to trigger massive protests.

Sisi’s popularity also stems from his strong personality and his understanding of Egyptians’ dystopian traits. Egyptians love Negm’s revolutionary aspirations, but they still worship stability. They respect Mandela, the freedom fighter, but have no serious appetite to reconcile with their rivals or forget their long history of mutual hatred.

The pyramid of politics in Egypt was always inverted — it is not the wide base that shapes the top authority, but the top bosses such as Gamal Abdel Nasser and Anwar Sadat who have always influenced and even manipulated the public. Thus far, and after two waves of revolts in Jan. 2011 and June 2013, the pyramid is still inverted. Egyptians still need a man at the top who can solve their problems and serve them freedom and democracy on a golden plate. Many Egyptians think Sisi can be this leader.

Interestingly, when Negm was asked about Sisi, he replied: "This man Sisi is sharper than the devil himself. After all, is he not a peasant?" Negm’s assessment is undoubtedly right. A smart Sisi swings between the front and back leadership, stepping in only when needed and leaving the rest for the interim government.

Sisi will not run for president before he eliminates the risk of a third wave of revolts against him. He understands that the two main ingredients for a successful uprising are political activism and wide public support. His policy is to ensure that activism dies down without taking his popularity with it.

Therefore, unless Egyptians shake their dystopia and dictate clear terms to prevent Sisi from indulging in another authoritarian rule, the prospect of President Sisi could be a very risky move. That is why, for now, both Sisi and the rest of Egypt need to re-read Negm’s poems and reflect on Mandela’s legacy if they want to end the cycle of bloodshed and embrace a better future for Egypt, "our glowing mother."