Why did Egypt's ElBaradei decide to reveal new info on Morsi's ouster?

Former Egyptian President Mohammed Morsi had already been arrested when the meeting between the armed forces and political forces was held on July 3, 2013, according to what former interim Vice President Mohamed ElBaradei has revealed in a series of statements recently. 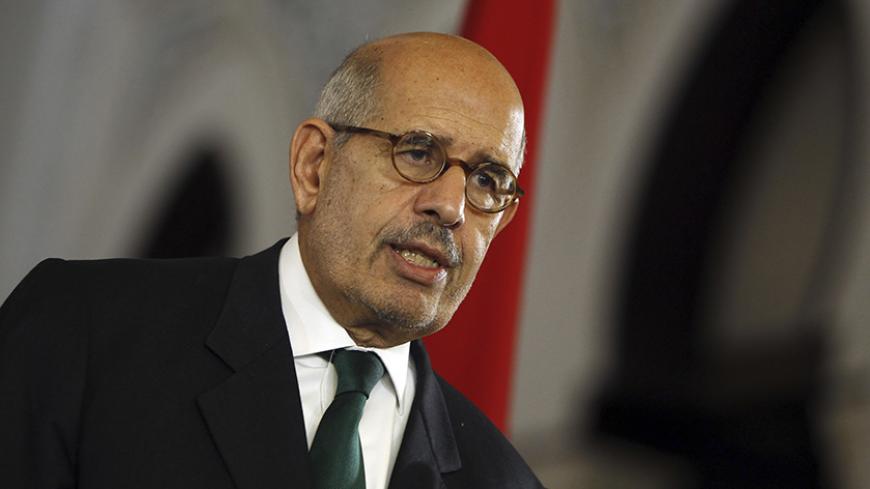 Former Egyptian interim Vice President Mohamed ElBaradei stunned everyone, supporters and opponents alike, with the statements he made on the events that took place behind the scenes surrounding the ouster of former President Mohammed Morsi on July 3, 2013, and the forceful breakup of the Rabia al-Adawiya protest on Aug. 14, 2013.

In a first statement published Nov. 1, ElBaradei revealed controversial details on a meeting that had taken place on July 3, 2013, between the armed forces and then-Defense Minister Gen. Abdel Fattah al-Sisi on the one hand, and political forces, the pope of Alexandria and patriarch of the Coptic Orthodox Church, Pope Tawadros II, and Al-Azhar Sheikh Ahmed al-Tayeb on the other. During the meeting, Sisi detailed the road map and Morsi’s ouster.

ElBaradei’s statement included several points, most notably that at the start of the meeting, he was surprised that Morsi had been detained already that morning by the armed forces without any prior knowledge of the national forces. This was the reason Mohamed Saad el-Katatni, the head of the Freedom and Justice Party, the Muslim Brotherhood’s political arm, had decided not to attend the meeting.

ElBaradei said, “The available options became quite limited. And of course, there was no longer the option of holding a referendum on early elections.” He also said that he had refused categorically during the 2013 meeting, which he had attended, the break-up of the protests in Rabia al-Adawiya and al-Nahda squares.

In the same statement, ElBaradei talked about political solutions the state and the Muslim Brotherhood were about to agree on back then — solutions that could have saved the country from drifting into a vicious circle of violence and division.

ElBaradei’s statement stirred a debate among most Egyptian parties, whether elements of the Muslim Brotherhood or supporters of the ruling regime. Journalist Sakina Fouad had participated in the July 3 meeting, where the participants were informed of Morsi’s detention.

Fouad said in a press statement Nov. 1, “What I understood [during the meeting] was that there were some reservations because the situation was inflamed and the risks were many. The people were very agitated. There was so much concern that one question was being repeatedly asked: Is there fear that the army might support the will of the people? The situation was very dangerous. But what I do know is that the meeting’s statement was not issued until after the Muslim Brotherhood had rejected categorically resorting to the will of the people.”

In his second statement issued Nov. 14, ElBaradei revealed that he had received threats from some figures, which he did not name, that if he proceeded with his efforts to end the protest peacefully or via the national reconciliation formula, he would be destroyed.

The third statement issued Nov. 15 came in response to the accusations made by the media and some supporters of the ruling regime against ElBaradei saying his last two statements serve the Muslim Brotherhood and their battle against the current regime.

During his term as interim vice president, ElBaradei tried to prevent the dispersal of the Rabia al-Adawiya and al-Nahda protests by proposing solutions to bring the state and the Muslim Brotherhood closer. Before the ouster of Morsi, ElBaradei headed the National Salvation Front, which opposed the Brotherhood’s rule and called for protests against Morsi. He then assumed the position of vice president of the republic on July 9, 2013. But following disputes with the ruling regime about the dispersal of the Rabia al-Adawiya protests, ElBaradei resigned on Aug. 14, 2013.

The spokesman for the Democratic Alliance, Khalid Dawood, defended ElBaradei’s recent statements, saying in a blog post Nov. 2, “ElBaradei was head of the National Salvation Front that overthrew Morsi, and this is the biggest proof that his statement is not in the Muslim Brotherhood’s interest.”

The head of the Egyptian Muslim Brotherhood overseas office, Ahmed Abdel-Rahman, called Nov. 3 on the law firm representing the group and the party in London to communicate with ElBaradei and to ask for his testimony in order to include it in the lawsuits submitted in European and international courts.

In exclusive statements to Al-Monitor, Hassan Nafaa, a political science professor at Cairo University, said that ElBaradei’s statements will not have a great impact abroad because Western countries know that his popularity in Egypt is not great and that he no longer affects the events in Egypt as he did in the past.

Nafaa noted that he used to be “very close to ElBaradei before the January 25 Revolution. When the National Assembly for Change received ElBaradei at the time, he had a chance to lead the change process. But he did not take advantage of the opportunity. And when he became vice president of the republic he had the opportunity to lead the young people, but he wasted it. ElBaradei’s first statement — in which he revealed what happened in the July 3 meeting — was aimed at clearing his name in front of the Western and political powers about his role in the so-called July 3 coup, and so that he does not get implicated in the detention of a legitimate president. But there is evidence that his statement lacks some truth. Over his [almost] two-month tenure as vice president, he did not object to the detention of former President Morsi.”