While many new parties and alliances have formed in Egypt in the three years since President Hosni Mubarak’s ouster, they have achieved limited success due to a focus on temporary issues and a lack of strategic goals. 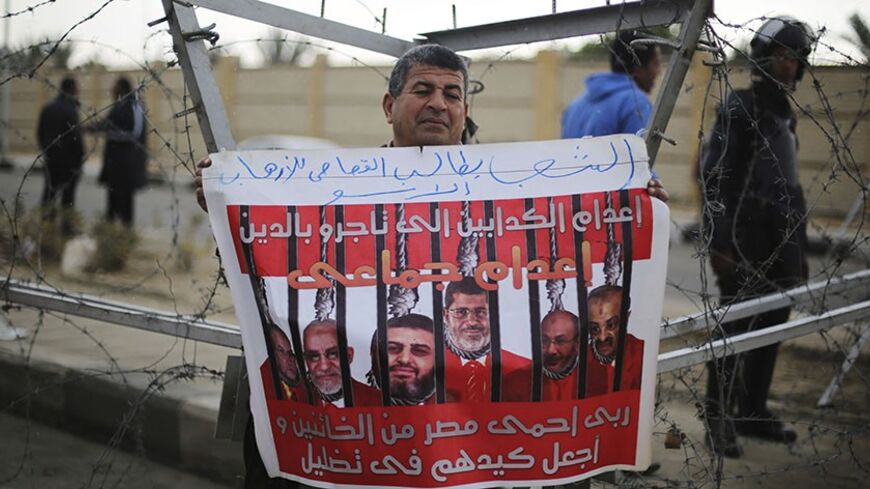 A supporter of Abdel Fattah al-Sisi rallies outside a police academy on the outskirts of Cairo, Feb. 16, 2014. - REUTERS/Amr Abdallah Dalsh

It's difficult to identify the programs of the parties belonging to the "democratic" or "social peace" generations, because these are unknown parties. Yet, despite the lack of knowledge about them, there are 50 such parties and political movements in Egypt.

Al-Monitor tried to find out more about these alliances, including the features of their future programs and the reasons for their decline in influence.

The NSF is a political bloc formed on Nov. 24, 2012, to mobilize people to reject the constitutional declaration former President Mohammed Morsi issued. The NSF comprises 35 political parties and political revolutionary movements, including other political alliances such as the Popular Front and the National Association for Change. All of these parties and movements embrace a liberal leftist ideology.

The NSF's most important figures included Mohamed ElBaradei, Amr Moussa and Hamdeen Sabahi. ElBaradei left Egypt after he resigned from the position of vice president in protest against the breaking up of the sit-ins at Rabia al-Adawiya and al-Nahda squares that were held by Morsi's supporters after his ouster. Moussa has stopped attending the NSF's meeting ever since he was selected to head the 50-member committee to amend the constitution, and Sabahi has announced his intention to run in the elections, without NSF support.

Yet, despite these internal divisions, on Feb. 2 the NSF announced that it was continuing its work as a result of a "commitment to its national responsibility to protect the democratic path, monitor its achievement and protect human rights and everything that benefits the nation and its citizens. [The NSF aims to] transform Egypt's constitution into a program that ensures everything that is necessary to achieve the people's national goals.”

Wahid Abdel Meguid, the official spokesman for the NSF, told Al-Monitor that the NSF's only goal is to maintain the common factors between its components, to ensure the NSF persists for a long time. "It is expected that the NSF will face political battles in the future to protect the democratic path, against [those who want] to revert to how things were before Jan. 25, 2011," noted Abdel Meguid. He added that the NSF is currently not focused on its presence in the street and its popularity, but rather it is concerned with planning to protect the democratic path and coordinating among its parties for the parliamentary elections.

The National Alliance to Support Legitimacy and Reject the Coup

This alliance was established on June 27, 2013 (before Morsi's ouster), and was initially named the National Alliance to Support Legitimacy. It did not add the phrase "and reject the coup" to its name until after Morsi's ouster on July 3.

In its founding statement, the alliance said that it "coordinates efforts to manage peaceful protests and sit-ins, with the goal of emphasizing a rejection of violence, protecting the choices of the people (in reference to Morsi, the [former] Shura Council and the constitution of 2012), completing the people’s revolution and achieving the revolution's noble goals, using all legal and peaceful means."

The alliance comprises 11 Islamic parties, the most prominent of which was the Freedom and Justice Party (FJP), before it was dissolved. The alliance does not include the Salafist Nour Party.

News agencies and websites have reported disputes within the coalition concerning the reconciliation initiative launched by some of its leaders. However, despite these difference, Magdi Karkar, an alliance leader, said that the alliance has an influential role in the political arena and in mobilizing citizens against the current regime.

Speaking to Al-Monitor, Karkar noted that the alliance's influence has declined because its supporters were afflicted by despair as a result of the change that occurred. He added that all financial and rational prospects are in favor of what he called the "military coup regime."

Road of the Revolution Front

The Road of the Revolution Front was founded on Sept. 24, 2013, to "assist the people's struggle for radical reforms, primarily redistributing wealth to benefit the Egyptian masses — including poor and low-income citizens — and build a democracy based on popular participation," according to the front's founding statement.

The front's founding statement was signed by more than 150 people, most prominent among them Alaa Abd El Fattah and Ahmed Maher, the former coordinator of the April 6 movement.

Mohammed Ibrahim, a founding member of the front, said that it does not have a strong or influential presence among a broad sector of the population because of obstacles it faces in the political arena and in the media. Speaking to Al-Monitor, Ibrahim said that weak funding, persecution by the security services and media distortion were the main reasons for the decline of influence in [the front's] political alliances, including "the revolutionaries."

This union was founded during the January 25 Revolution by a number of youth. According to Adel al-Rabia, a union coordinator, its activities are divided into three groups: fighting corruption within all state institutions, proposing many alternatives to achieve economic development and political movement contesting parliamentary and local elections.

Rabia told Al-Monitor that the union is primarily concerned with local issues, and they seek to offer many services to citizens in rural villages and in Upper Egypt to increase the popularity of the union. He noted that the union has yet to gain much influence, as a result of what he called "the corrupt media that seeks to weaken the chances of the youth through raising suspicions about them."

The June 30 Coordinating Committee was founded on June 27, 2013 — i.e., three days before the June 30 demonstrations — by a number of activists in Alexandria. In their founding statement, they announced that their goals were "[ensuring] a peaceful handover of power, the formation of a caretaker government and a legal committee to amend the constitution, which would be followed by parliamentary and presidential elections within a period not exceeding six months.”

Although these objectives were not achieved in six months, the June 30 Coordinating Committee is still active. Hamada al-Kashif, the committee's official spokesman, said that their role has decreased significantly and there is no communication between them and the Egyptian street regarding any political action. Speaking to Al-Monitor, Kashif said that the committee's current role is limited to discussing the performance of the government and how to empower the youth, noting that all of their demands have been ignored by the state.

Kashif attributed the decline in popularity of these political alliances and fronts to the deteriorating economic and social conditions, noting that they used vague terms such as "social justice" and did not provide a vision or clear program to achieve their goals. According to Kashif, citizens did not feel that these forces were adopting the people's clear and direct demands such as setting a minimum wage. He noted that the majority of these alliances do not last long, because their goals are related to a specific stage and they have no strategic objective.

Thus, it can be said that all of the leaders from these alliances and fronts that Al-Monitor spoke with acknowledged that they had weak influence on the street, even if they attributed this to different reasons: weak funding, media distortion, being pursued by the security forces and a decline in the cultural, social and economic level of citizens. All of these factors have contributed to the weakness of these alliances' political activity. However, the most influential factors may be the following:

The popularity of political alliances has declined amid the weakness of their parties because of their inability to put forward clear programs that achieve the ambitions of citizens, whether they are in the government or the opposition. Many also expect the popularity of Islamic parties to decline — first and foremost the Nour Party. This means that the upcoming parliamentary elections could witness a low voter turnout, and thus result in a parliament and government that only represent a small segment of society. However, political forces continue to form and dissolve alliances and issue statements that do not influence citizens or their positions, for the aforementioned reasons. Thus, political life in Egypt has reached its "clinical death."