Wael Nawara writes that Egypt’s political crisis could lead to chaos or the intervention of the military unless the government and opposition agree to work together. 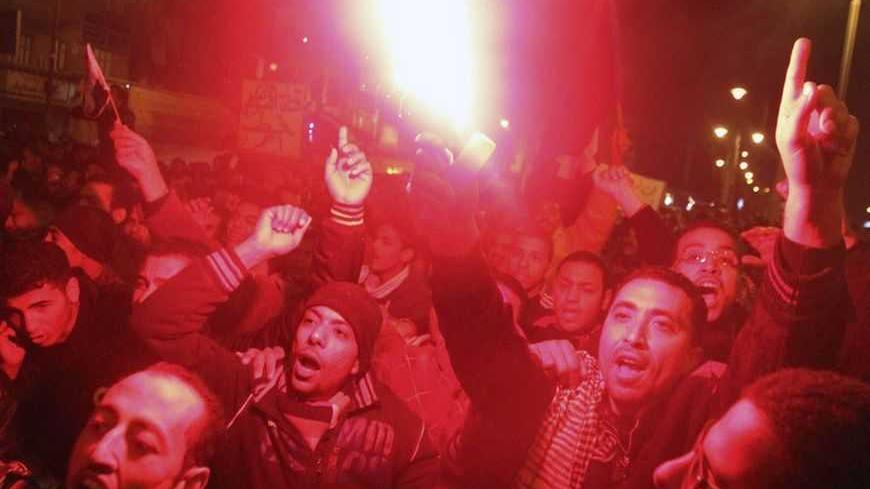 Protesters opposing Egyptian President Mohammed Morsi shout slogans as they march despite a nighttime curfew in the city of Suez, Jan. 28, 2013. - REUTERS

Egypt is commemorating the second anniversary of its “Peaceful” Revolution with the shedding of yet more blood. Violent clashes in Cairo, Alexandria, Suez, Damanhour and Port Said left almost 60 dead and hundreds injured and the numbers are rising.

There are circumstantial factors in every incident triggering violence. Whether it is the Port Said football fans court verdict or regular confrontations between protesters and the police, the root cause is political. It lies in the Muslim Brotherhood failure to create consensus around the shape of the political process.

Last month, the Muslim Brothers insisted on putting forward the draft constitution to a hasty referendum despite opposition appeals to take more time to settle disputed articles. Liberals, leftists and representatives of Egypt’s churches pulled out of the constituent assembly which drafted the constitution, leaving only Muslim Brothers and Salafists to craft a document which should ideally embody Egyptians’ ideology of coexistence in a country which had historically prided itself of being a “melting pot” and where accommodating diversity is a prerequisite for survival.

The referendum revealed that 57% of the voters in Cairo, Egypt’s capital and home to about fifth of Egyptians, rejected the draft constitution. And while urban voters all over Egypt mostly said no to the constitution, the Muslim Brothers, election-savvy and superior in organization and funding, managed to pass the constitution with a 63% majority.

After the vote, a video was widely shared where Yasser Burhamy, a Salafist member of the constituent assembly, bragged about how Islamists deceived seculars and Christians from the beginning till the end. He described how Islamists dominated the constituent assembly by placing  secret “sleeper cells” or sympathizers with the “Islamist Enterprise” secretly in the seats allocated to “seculars” in breach of reached agreement. He then goes on explaining how he confounded seculars and Christians, whom he calls Nazerites, with tricky words and definitions from Shariah which would “annul and restrict rights and freedoms as never before witnessed in any Egyptian constitution,” according to Burhamy’s filmed confessions! This comes after a revolution which provided freedom for Burhamy and his Salafist fellows from prosecution that they suffered from for decades under the Mubarak regime.

Clashes in Egypt reflect Muslim Brotherhood and opposition failure to work together in building a working democracy with an inclusive political process. Like many countries in Europe, no single political party or even stream commands an absolute majority in Egypt. This means Islamist and secular parties must work together to reach agreement on broader issues defining the political process. In the first round of the presidential elections, Mohammed Morsi, now president, got only 25% of the votes. This more or less represents the Islamists' share of popular support in Egypt. The problem persists since the beginning of the revolution as the Muslim Brotherhood insist on getting 100% of power.

The Muslim Brothers are skilled and experienced in election tactics and mobilization. There is no doubt about that. But they seem to be too clever for their own good. They are becoming hostage to their ability to leverage their popular share, thus cornering the rest of the opposition in a squeezed political space where they will always kick back. This can hardly provide an atmosphere for a stable and sustainable government. A political party which has 25% popular support would usually seek coalitions and in so-doing accepts compromises. But for whatever technical reasons, the Brotherhood believe they do not have to make such compromises. They have been waiting for 85 years and this is their moment. They managed to get exceptionally much higher share in the elections following the revolution and they want to cling to that. The reality now is, this is an unsustainable situation and one which may threaten their future survival.

On the other hand, the opposition, most notably the National Salvation Front (NSF), is limping and always a few steps behind. With mostly infant organizations and piggy bank financing, they can hardly turn the wide dissent against the Brotherhood into tangible election gains.

Since the revolution, Egypt has witnessed what we may call “post-democracy.” Failure of the democratic process to produce results agreeable to a wide spectrum representing diversity of the people, and especially the activists, is always met with resistance and pressure through protests, forcing authority to make amends to reflect voices of parties not even present on the table.

Forces or sentiments poorly represented in the democratic institutions, such as the parliament, were able for instance to force SCAF and other political forces to amend a deal which would have left SCAF in power till 2013, bringing a deadline of handing power to a  civilian president to June 30, 2012. Similar pressure forced Morsi to withdraw his “Dictatorial Decrees” in November 2012. And when the Supreme Constitutional Court ruled to annul the People’s Assembly elected only months before, activists appalled with the Parliament’s performance applied zero or even “negative” pressure in sustaining the dissolved lower chamber of the Parliament.

On Sunday, President Morsi announced a state of emergency cities near Egypt's Suez Canal and invited NSF and other opposition leaders to dialogue the following day. NSF declined to join the dialogue accusing Morsi of not being serious and demanded guarantees which Morsi did not meet. People of Suez, Ismailia and Port Said totally ignored the curfew and organized massive rallies in defiance of the emergency measures imposed. Commenting on the deteriorating security situation and increasing chaos the Army Chief announced on Tuesday that failure to reach a political  deal threatens the integrity of the Egyptian State.

With the continued disarray of the political scene, Egypt may be approaching a point of “no-return” to becoming a failed state on several dimensions. Lack of political consensus is dragging the economy, preventing a much needed return to normalcy. Tourism is badly hit. Foreign investment, business and consumer confidence are at record lows. The Egyptian pound is losing ground fast and could go to a free fall if a political deal is not reached soon. This will in turn send prices of many basic commodities soaring, which will further increase suffering of many people. What is worse is the general disintegration of law and order. Militias are being formed and smuggling of arms from Libya has provided Jihadist organizations with ample supply of heavy ammunitions. If the political forces do not reach that deal soon, more street fights will erupt and intensify and the country will descend into chaos at which point the army, supported by local and international demands for intervention, will almost certainly seize power to prevent further disintegration of the state.

Once this point of “no return” is reached, additional chaos would bring “loss of control” to an irreversible state when even a military intervention would not be able to fix things or restore order. On the other hand, a military coup will bring Egypt’s transition to square one or even a step below, as short-term measures which the army would use to regain order may become long term deductions of newly acquired freedoms. Time will tell if the Egyptian political forces in government and opposition are able to grasp the risks involved as they push things ever closer to the brink, approaching the dangerous “point of no return.”

Wael Nawara is an Egyptian writer and activist. He is also the co-founder of Al Dostor Party, The National Association for Change & El Ghad Party. He is formerly president of the Arab Alliance for Freedom and Democracy (AAFD), and was a visiting fellow at the Institute of Politics, Kennedy School of Government, Harvard University.