The Muslim Brotherhood Fights For Legacy, Not for Morsi

The protests have shocked the Muslim Brotherhood into reconsidering its position in Egyptian society beyond whether President Mohammed Morsi stays or goes. 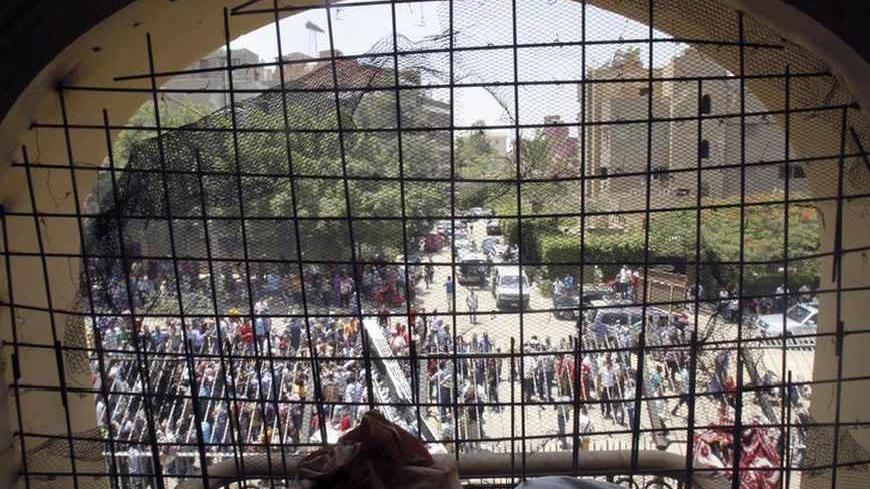 Protesters seen through a damaged window from inside the Muslim Brotherhood's headquarters after it was attacked by protesters opposing Egyptian President Mohammed Morsi in Cairo's Moqattam district, July 1, 2013. - REUTERS/Amr Abdallah Dalsh

CAIRO — As millions of protesters converged on the streets of Egypt on June 30 to peacefully yet boisterously demand the downfall of Egypt’s first elected president, Mohammed Morsi, deadly clashes broke out in several spots across the volatile nation. Around midnight, the Muslim Brotherhood’s international headquarters, located in Cairo’s upscale Moqattam district, was in flames.

The six-story building declared as the Muslim Brotherhood General Center in 2011 — after decades of underground operations and being hunted down by Hosni Mubarak, Anwar Sadat, and Gamal Abdel Nasser’s security — was attacked by dozens of rock- and Molotov cocktail-hurling protesters. The attacks ensued despite the obvious security precautions taken by the Brotherhood youth over the past week: they covered the building’s windows with street-war like sandbags, chain-locked the gates, wielded their weapons and bunkered inside.

As massive clouds of smoke blew out of the iconic Guidance Bureau of the worldwide organization, the movement’s disciplined, listen-and-obey youth continued to fire live ammunition at the assaulters. No more Brotherhood reinforcements arrived at the burning headquarters, and armored vehicles of the Interior Ministry stood watching from a distance, a clear message that the police would no longer protect the ruling clique.

Eight anti-Morsi protesters were killed by live bullets, mostly to the head and neck, and more than 35 were wounded by live rounds and birdshot. Calls for blood donations to the battle-neighboring hospital continued to circulate social media websites for hours. How the Muslim Brotherhood fighters evacuated their positions remains unknown, but one of them was caught by protesters trying to escape and was brutally stripped naked and stabbed before reaching the police station in  critical condition.

Certain that the office-turned-barracks had been abandoned after hours of deadly fighting, opposition attackers and random angry passersby raided the building, and looted everything they came across. Stacks of confidential Muslim Brotherhood documents were photographed and set free to virally circulate the Internet. One document listed millions of dollars of financial gifts and grants made by Qatar’s Prime Minster, Emir Hamad Bin Jassim Al-Thani, to top Brotherhood and Morsi administration officers.

The authenticity of the document was never confirmed but the incident was definitely reminiscent of raiding the clandestine fortress of Hosni Mubarak’s State Security in March 2011; the freshly obtained Muslim Brotherhood leaks will virally spread for weeks.

Surprisingly, thousands of devoted Brotherhood members holding their sit-in a few miles away didn’t mobilize to protect their sabotaged minaret. Top officials like Khairat El-Shater, the organization’s most influential financier and deputy chairman, did not order their subservient youth to march in defense of either Islamic Sharia or political legitimacy, as they once did in December 2012 when they attacked an opposition sit-in at the east Cairo presidential palace, leaving a dozen protesters dead.

“They are in a state of shock, serious and unprecedented shock,” a sacked Muslim Brotherhood official who worked with both Morsi and El-Shater told Al-Monitor on condition of anonymity.

“They underestimated June 30, but it turned out to be a surprising blow that paralyzed their plans,” said the source who insisted on hiding his identity fearing Brotherhood retaliation amid the ongoing instability. “After months of undermining the opposition and people, no one could imagine the numbers and momentum of protests, and accordingly no one had a backup plan.”

The former Brotherhood official says the movement fears a disastrous post-Morsi future. “They will be hunted down and sent back to prison, by law for crimes committed during Morsi’s year in power, or in a state of lawlessness that the country will turn a blind eye on because of widespread and apparent hatred. They are coming to realize that they will reap what they sowed.”

“The developments were too fast, so that they didn’t have a chance to flee the country, like Mubarak’s officials who jumped ship early in January 2011," the source said. "The military and police apparently locked Egypt up and Islamists are now on a turf that definitely doesn’t belong to them anymore, despite Morsi, who is now in a palace that doesn’t obey him, more of a temporary lock-up.”

Such anti-Morsi developments are not only limited to the Muslim Brotherhood in Egypt.

The powerfully strategized, multibillion-dollar organization with its deep-rooted divisions in almost every country in the Arab and Islamic world and its worldwide businesses, either official or clandestine, is not fighting for Egypt’s presidential seat: It is fighting for an eight-decade global legacy that will imminently suffer the aftershocks of the popular quake jolting its murshid’s [supreme guide’s] historical fortress in Cairo.

“This is a major element in the Brotherhood’s calculation and this is their greater battle,” retired Col. Khaled Okasha, a security analyst and former head of North Sinai’s Civil Defense Department of the Interior Ministry, told Al-Monitor.

“The Egypt command, which is the only global command, has always been the source of power to all sub-divisions in other countries,” added Okasha. “If the Supreme Guide and his Cairo bureau are hit hard by Morsi’s downfall and all of the current situation’s political and social consequences, they will become nothing but a counselor to the international divisions that will then start working independently according to their pure domestic circumstances.”

“Egypt’s presidency, the biggest win in the Brotherhood’s history and the recently yet internationally recognized political umbrella for the Brotherhood worldwide, will be gone with Morsi leaving office.”

“This orchestrated fear is mostly Morsi’s last card to maintain his supporters’ morale. The Brotherhood is leading a smear campaign against every scenario involving Morsi’s downfall.”

Legally, Okasha believes, the Muslim Brotherhood officers including Morsi, in case of his resignation, will stand dozens of trials that could extend for years, a scene very similar to Hosni Mubarak, his sons and regime members.

Over the past week, unconfirmed reports of Egypt’s Islamist figures on travel ban lists and Qatar demanding the departure of Youssef Al-Qaradawi, the influential Muslim Brotherhood cleric, have shed some light on repercussions that might possibly hunt the Muslim Brotherhood wherever they are. The Gaza Strip’s Hamas Movement, the closest of the Middle East offshoots to the command in Egypt, stands first in the line after Morsi and the Guidance Bureau, and is desperately trying to avoid the looming domino effect.

“Hamas’s popularity in Gaza and Egypt continues to sink because of their shameless interference in defense of the Muslim Brotherhood and Morsi and creating animosities with almost every non-Islamist power in Egypt. In addition to politics, the relations between the peoples of Egypt and Gaza were negatively impacted,” said Ahmed Ban, a researcher of Islamist movements who heads the Political and Social Movements Unit at the independent Nile Center for Strategic Studies.

“Hamas should hastily apologize to the Egyptian people and attempt fixing what it broke by interference in Egypt, if that’s possible, and if the situation worsens, it could be a start to the gradual end of Hamas’ rule over Gaza,” Ban told Al-Monitor.

“Moreover, the 80-year cartel imposed by Egyptians on the global Supreme Guidance in Cairo and the Guidance Council will be ended, possibly moved to another country, and accordingly limiting the majority of direct supply, political endorsement and the post-January 2011 refuge for Hamas.”

Signs of Hamas’ worsening situation have also surfaced in the past week. On June 30, Egypt’s military deployed tanks at the Gaza border; the first appearance of Egyptian tank divisions in Sinai’s military-free Zone C since the Israeli withdrawal in 1982.

The exceptional deployment was ordered by the military shutting down the underground Rafah tunnels feeding Hamas’ armed militias with weapons and other logistics, and it coincided with the arrest of three different groups of Hamas armed members in different locations around Cairo on the same day, one the detained groups occupied an apartment close to the destroyed Brotherhood Cairo headquarters.

“They are in the heart of the Muslim Brotherhood’s battle to defend what remains of their temple, a battle viewed by Hamas as their own,” said Okasha, the retired colonel. “Morsi and the Brotherhood’s rule was a special, unprecedented win for Hamas, I don’t think they will rethink their position and withdraw from the scene at such a critical moment.”

As soon as the Egyptian military stepped in and declared a 48-hour ultimatum for Morsi to satisfy national demands, the sacked Muslim Brotherhood member reached out to Al-Monitor.

“The military just opened a less disastrous exit for Morsi, but he won’t take it," the source said. "The Muslim Brotherhood is too blind to realize how weak its cards have become.”