Egyptian Prime Minister Hisham Qandil visited the Gaza Strip to declare support for Hamas and the Palestinian people while thousands of Cairo protesters marched out of Al-Azhar Mosque after Friday prayer to demonstrate against the Israeli strikes with calls to “liberate Gaza.” 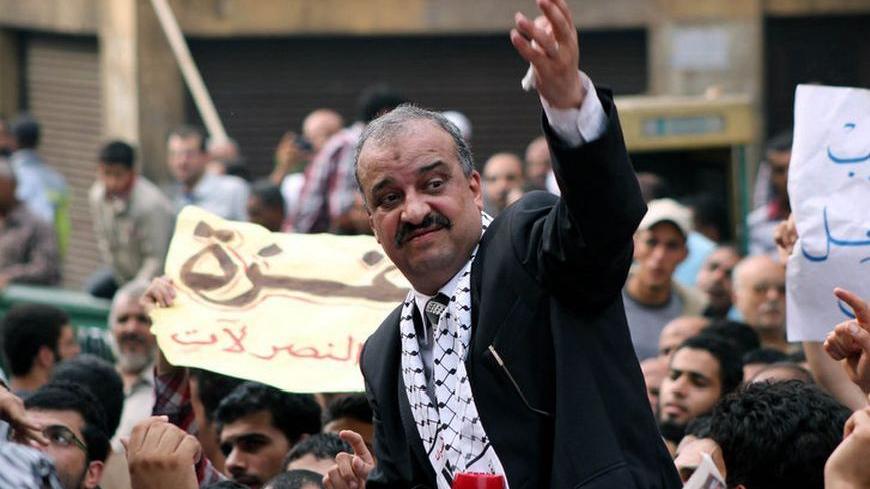 “The revolutionary Egypt will not hesitate to put forth the needed efforts to end the aggression and reach a truce between both sides,” said Prime Minister Hisham Qandil during a joint news conference with Hamas’ leader, Ismail Haniyeh.

“I come to Gaza to represent Egypt’s first elected president and to confirm the government, people and leadership’s support to the Palestinian people until they receive their freedom and end the occupation,” said Qandil.

Photos taken of Qandil kissing the dead body of a child killed by Israeli strikes on Friday morning virally spread over social media websites; the corpse arrived during his visit to Gaza’s main hospital. Hamas’ Ismail Haniyeh described the visit by Egypt’s prime minister as “historic.”

President Mohamed Morsi addressed both Gaza and Israel from a Cairo mosque. Wagging a finger, his condemnation was much harsher than that of his prime minister.

“Our souls long to Jerusalem and I tell the aggressors to learn from history and put an end to bloodshed or else you will not be able to face our anger, the anger of the people and its leadership,” threatened Morsi, who refrained from saying the word ‘Israel’ throughout the speech but referred to it as the aggressors.

In Islamic Cairo, thousands of protesters marched out of Al-Azhar Mosque immediately after the Friday prayer. Angry demonstrators carried banners emblazoned with calls to “liberate Gaza” and threats of “Israel’s looming end.” Anti-Israel chants echoed across major streets paralyzed by protesters marching to the head quarters of the Arab League in Cairo’s iconic Tahrir Square.

Mohamed El-Beltagi, the Muslim Brotherhood’s top officer and the Secretary General of the Freedom and Justice Party lead the Al-Azhar Mosque protest.

“If the aggression against our brothers in Gaza continues, we will demand canceling all agreements signed with Israel including the Camp David Peace Treaty,” El-Beltagi told reporters during the protest.

“We call on Egypt’s government to take all necessary action and we call on Arab leaders to unite in support of Gaza.”

Unlike protests held in support of Gaza for years under the regime of former President Hosni Mubarak, who was ousted by the Jan. 25 uprising in 2011, protesters cheered the government’s escalation against Israel and called for more.

“This was an unexpected reaction to the attacks on our brothers and sisters in Gaza, but it definitely reflected the people’s will,” Mohamed Qutb, a 21 year-old business student told Al-Monitor.

Qutb believes that Egypt should do more for Gaza, “the terminal should remain open and we should supply the Palestinians with everything including weapons to fight off the Israeli aggression.”

“President Morsi should put the peace treaty out to a public referendum so Egyptians could decide what will become of the relations with Israel,” said Qutb. “We are not looking for war, but we are acting according to the circumstances and an attack on Gaza is basically a threat to Egypt’s security.”

Meanwhile, former presidential candidate and founder of the Powerful Egypt party, Abdelmonem Abolfotoh, arrived in Gaza to lead a medical convoy organized by the Rescue and Emergency Department of the Arab Doctors Union. The convoy incorporated dozens of doctors and tons of medical supplies.

“I demand the Arab governments stop the condemnation and criticism and take practical, effective actions,” said Abolfotoh, “There has to be an end to the Zionist crimes against Palestinian unarmed women and children.”

Back in Cairo’s Tahrir Square, Sheikh Mazhar Shahin of Omar Makram Mosque, which housed a field that treated thousands of injured protesters during the bloody confrontations of the Jan. 25 uprising, condemned the “Arab silence toward the Palestinians.”

“If you [Israel] escalate your military operations or threatened Egypt’s national security, we will demand President Morsi to open the borders with Gaza and allow the Jihad [holy war] against the Jews,” Sheikh Shahin threatened.

Mohannad Sabry is an Egyptian journalist based in Cairo. He has written for McClatchy Newspapers and The Washington Times, served as managing editor of Global Post's reporting fellowship "Covering the Revolution" in Cairo as well as a contributor to its special reports. Follow him on twitter @mmsabry.