Following Qatar's ousting of Hamas' political bureau from the emirate, the group is in search of a new home. 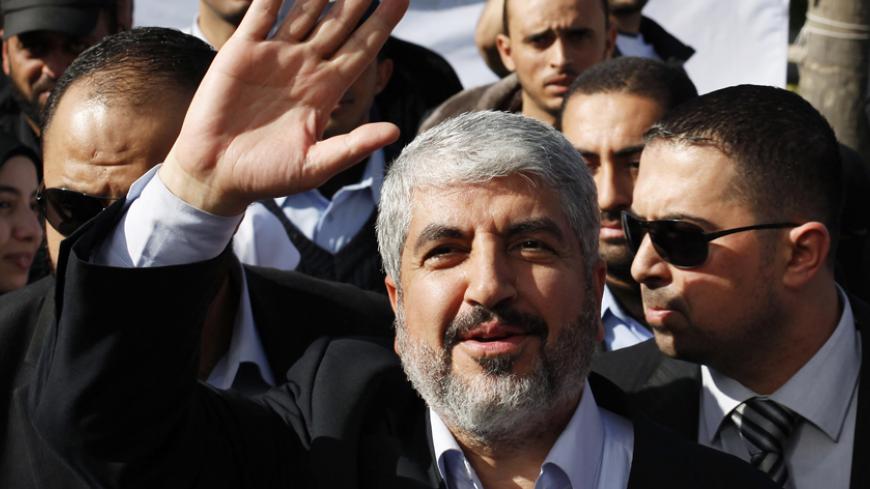 The honeymoon is over. Having lost the protection and pampering of the emir of Qatar, political bureau head Khaled Meshaal and other senior Hamas members are now hunting for a new home. Qatari Emir Tamim bin Hamad Al Thani grew weary of them, even though he seemed for many months to be following in the footsteps of his father Hamad bin Khalifa Al Thani, and was poised to take Hamas under his wing. After clearly careful consideration, the emir resolved to reconcile with Egypt and its leader, President Abdel Fattah al-Sisi. In keeping with the demand of his new ally, he sacrificed his former allies Hamas and the Muslim Brotherhood. Overnight, Meshaal became the first casualty of the new relationship between the largest state in the Arab world and the rich and influential Gulf emirate.

Professor Uzi Rabi, the director of Tel Aviv University's Moshe Dayan Center and a world-renowned expert on the Gulf states, explained in a 2014 conversation with Al-Monitor what prompts Qatar to forge and break alliances with neighboring countries and political movements in the Arab world. According to him, although Qatar is a wealthy emirate, it does not have the military capability to defend itself against external threats. The huge quantities of money its leaders and residents are raking in from the oil industry could tempt various forces in the turbulent Middle East to act against it, thus compelling it to forge alliances with ethnic groups, movements and states that will come to its defense when the need arises. When Hamad bin Khalifa Al Thani saw the Muslim Brotherhood as a rising power in the Middle East and the Arab world, the right step from his standpoint was to make a pact with it, thus protecting his emirate from a situation in which the regime might be toppled or undergo a revolution, which is what the Muslim Brotherhood did in Egypt.

But now the Muslim Brotherhood is a bygone. And as far as his succeeding son is concerned, the same is true of Hamas, a Brotherhood offshoot that is no longer essential.

Despite initial reports, it remains uncertain whether Turkey will be the final stop for Meshaal and the other senior members of his bureau. However, the movement’s leaders, who were quick to deny that they had been banished from Qatar, already admit that they were told to discontinue their diplomatic activity in the emirate. In fact, by all indications, the political bureau in Qatar no longer exists, and Hamas’ senior officials are merely tourists there. It should be noted that when the organization’s senior members left their offices in Damascus for Qatar in January 2012, its spokesmen were quick to emphatically deny the reports.

Turkey would be a natural destination for senior Hamas officials. Turkish President Recep Tayyip Erdogan has already taken Saleh al-Arouri under his wing. The latter founded an independent headquarters for the organization and has often taken a defiant stance against Meshaal and his people. Arouri was also suspected of having planned to stage a coup in the Palestinian Authority against President Mahmoud Abbas. He is also the one who drove the members of the Hebron-based Qawasmeh family to kidnap and murder the three Israeli youths in June 2014 before the launch of Operation Protective Edge in the Gaza Strip. It would be interesting to see who will exercise more influence over whom, and who will have the upper hand should Hamas’ new political bureau be established in Turkey.

Either way, neither individual is headed toward the Gaza Strip. In the past, when Hamas was an underground movement, its senior members and leaders were targeted by Israel. Dodging the threat of the Israeli military’s Apache helicopters or unmanned aerial vehicles was an understandable consideration. Meshaal himself was appointed the movement’s leader after the killing of Hamas founder Sheikh Ahmed Yassin and his successor Abdel Aziz al-Rantisi in the spring of 2004. The members of the Shura Council — Hamas’ supreme body — determined that the movement’s leader would be safer under the aegis of the Assad family in Damascus.

A lot of water has since flowed in the sea of Gaza. A Hamas government was established and the movement’s leadership operates openly in Gaza. A balance of terror vis-a-vis Israel has also been created. The movement’s leaders are no longer targeted for killing by the Israel Defense Forces. Former Hamas Prime Minister Ismail Haniyeh and senior Hamas official Mahmoud al-Zahar do not live underground, but lead normal lives in Gaza. If Meshaal, who has been at the helm of Hamas for 11 years, sees himself as the flesh and blood of his own people, he should deign to come to Gaza to live amid them and share their plight. He has no need or reason to remain in exile. In the Gaza Strip, he will be able to understand the devastating repercussions of his policy on the lives of Palestinians.

Whenever Gaza-based Hamas leaders tried to explain to the political leadership in Damascus and Qatar that the direction of compromise should be embraced, Meshaal was always the one to push for a military confrontation with Israel. That was the case during Operation Cast Lead in December 2008 as well as during Operation Protective Edge in the summer of 2014. During the latter, it took many days to convince Meshaal to accept the Egyptian proposal to broker a cease-fire with Israel. Had he accepted the proposal during the first week of the war, probably many lives would have been spared. If he chooses Gaza as his new abode, it is possible that the lives of many of his people will be spared in the future.