Salah Bardawil, senior Hamas leader and member of parliament, in an exclusive interview with Abeer Ayyoub, warns that if President Barack Obama visits the al-Aqsa Mosque with Israeli security, "it will result in the biggest political disaster in the history of Palestinian-American relations." 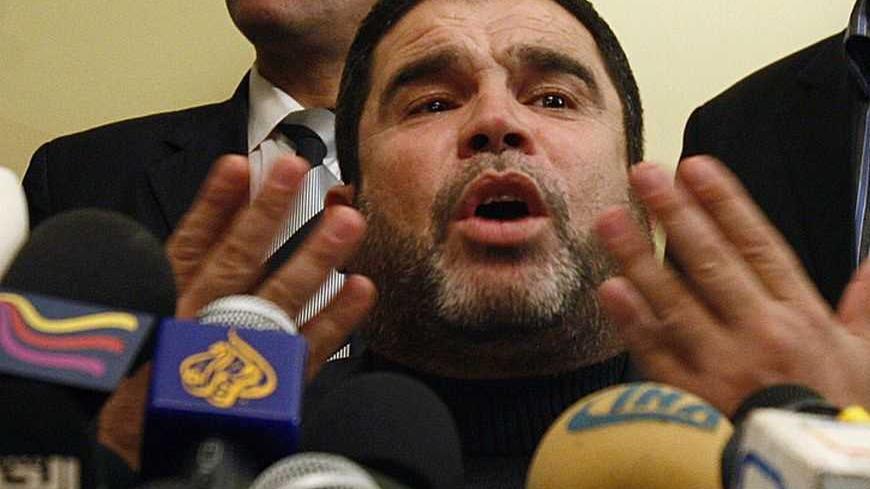 The Palestinian Authority is “dragging its feet” on reconciliation due to US President Barack Obama’s scheduled visit in March, senior Hamas leader and Gaza parliamentarian Salah Bardawil told Al-Monitor in an exclusive interview. Bardawil touched on this along with the latest disputes between Hamas and Fatah and said that little progress is expected until after the Obama trip.

The Hamas leader warned that Obama’s visit to al-Aqsa Mosque — Islam’s third holiest site — if accompanied by Israeli security forces will have “catastrophic ramifications on the current political situation.” Bardawil predicted that a third intifada is on the horizon and gave his support to current protests against the Israeli occupation in the West Bank. He also spoke of Egypt’s Muslim Brotherhood and relations with Iran, which he claimed have not soured despite the fallout with Syria.

Al-Monitor: What are the latest developments on the ground regarding the Palestinian reconciliation process?

Bardawil: Palestinian reconciliation is under way and is no longer in the discussion phase. All of the conditions from previous discussions have been duly met. The last meeting in Cairo saw the launch of the implementation phase of reconciliation. However, from the outset of the Cairo discussions, it became apparent that US President Barack Obama's visit to the region placed the Palestinian Authority in an embarrassing conundrum regarding the implementation of these conditions. President of the Palestinian Authority (PA) Mahmoud Abbas feels that his meeting with the US president will be strained by the fact that he is also sitting at the table with Hamas, whom the United States refuses to recognize. At President Abbas’ request, the PA has delayed implementation by dragging their feet or finding excuses. However, the Egyptians intervened and pressured them to begin setting parameters for implementation and to set dates so that the government is formed and elections are held in the same time frame so that public freedoms can be respected.

The PA ostensibly agreed to the Egyptians’ demands, but it hasn’t done anything to actually carry out any of the measures. Hamas in Gaza and the Palestinian government completed the necessary electoral registration process and met Fatah’s demands that some political prisoners be released. So as far as we are concerned, things are calm. However, arrests have increased in the West Bank, and these arrests have been linked to the end of reconciliation, trampling on past agreements. Abbas has made forming a government conditional upon setting the date for the elections: these are all excuses so that they can delay taking actual measures until after Obama’s visit. This is the status of reconciliation now. Reconciliation is tied to the PA, and the PA is tied to Obama’s visit.

Al-Monitor: Is it accurate to say that the continuation of Azzam al-Ahmad as a Fatah representative at reconciliation meetings still irks Hamas, especially after his disparagement of Aziz Duwaik?

Bardawil: Of course Hamas has denounced Ahmad’s statements regarding Duwaik, and all Palestinians ought to as well. Duwaik is not just a public figure or a representative of Hamas, he is the Speaker of the Palestinian Legislative Council, head of the parliament, a post to which he was elected by the entire Palestinian people. Insulting him, especially in Ramallah in the shadow of the Israeli occupation, has greatly vexed Hamas and sullied relations, especially considering that Fatah appointed Ahmad to the meetings with Hamas. Hamas postponed the meeting indefinitely to protest Ahmad’s appointment but that wasn’t the only reason.

Hamas realized that the PA doesn’t intend to implement any aspect of the agreement because of Obama's visit. Thus, it doesn’t want to mislead the Palestinian people with pictures of meetings, especially with Ahmad, who insulted the speaker just yesterday [Feb. 26]. We do not need to take pictures with Ahmad or with any official for that matter as long as time wasting continues.

Al-Monitor: What do you expect regarding the Palestinian elections?

Bardawil: The elections depend upon the Palestinian factions coming to an agreement. However, there must be a government overseeing the elections, but Abbas refuses thus far to form a government. This government is based on seven issues, among them: election supervision, unification of the West Bank and Gaza security services, encouraging communal reconciliation, reconstruction, and most important, holding elections. Abbas is still wagering this process on Obama's visit.

Al-Monitor: What is your position on Obama's visit to the region?

Bardawil: We question the goals of Obama's visit. We firmly believe that Obama isn’t going to bring anything new to the table and that he will neglect to give the PA or the Palestinians what they deserve. However, visiting al-Aqsa Mosque under the auspices of the occupation will result in the biggest political disaster in the history of Palestinian-American relations; it will be tantamount to condoning the Zionist occupation of East Jerusalem and of the al-Aqsa Mosque. Throughout our history, we have rejected the establishment of a US embassy on Palestinian land, and now a US president is to come and enter al-Aqsa escorted by Israeli firepower? This will be interpreted as him saying that Jerusalem is rightfully for the Jews, which will have catastrophic ramifications on the current political situation.

Al-Monitor: What about your relations with Egypt and the Muslim Brotherhood, especially after Egypt's decision to demolish the tunnels?

As for the tunnels, they are not a Hamas luxury item, but rather a natural consequence of the current situation. Egypt understands the Palestinian situation. If the siege were lifted there would be no need for tunnels. We hope that the well-being of the Palestinian people will be taken into account and that demolishing the tunnels be reconsidered because this will harm the people as long as no alternatives are provided.

Al-Monitor: What about your relations with Iran, specifically after your fallout with the Syrian regime?

Bardawil: There is no doubt that Iran at a certain point in time was a bulwark for the Palestinian people. There are no negative relations between us and them, ideologically and politically. Our relationship with Iran is governed by common interests and foremost by its support for the continued resistance against the Israeli occupation; no attention is given to sectarian considerations.

As for what happened in Syria, we were neutral. However, we expressed our support for the rights of the Syrian people and we informed Syria and Iran of our stance in this matter. We in Hamas come from a wronged people, and thus we demand that all peoples be given their rights and liberties. Unfortunately, violence and a security crackdown won out so we chose to stand with the people. Iran disagreed with us in this regard, but this in no way severed or even soured our relations with them.

Al-Monitor: How long can Gaza continue to persevere given the embargo and the fragile truce with Israel?

Bardawil: Since 2006, Hamas has endured not only under an economic and financial siege, but under a political one as well. Some thought that Hamas would not last more than six months. Hamas adopted a strategy of resistance and resolve, and it was aided by the support of the Palestinian and Arab people. The Arab peoples began with supporting Gaza, which then ballooned into the overwhelming popular revolutions that toppled regimes. The injustice being done to Gaza was probably the most important reason that these regimes fell. The situation grew and grew until the Arab regimes were forced to face up to their tacit compliance regarding Palestine’s mistreatment. The people took to the streets and demanded the liberation of Palestine, so Hamas will continue to endure until there are breakthroughs in the positions of the Arab countries.

Al-Monitor: Between Hamas’ famous line “We have not and will not recognize Israel” and Khaled Meshaal’s recognition of Israel along the 1967 borders, where does Hamas stand today?

Bardawil: Firstly, Meshaal did not break with Hamas’ political platform. Hamas signed the Palestinian National Accord, which was based on common denominators shared amongst all Palestinian factions, and included the approval of establishing the state in accordance with the 1967 borders. Some Palestinian factions agreed to this while granting recognition, while other groups withheld recognition. The impasse of the National Accord was solved through non-recognition of the occupation and the assertion that rights do not fade with time. Thus, Hamas chose the middle ground between its strategic and tactical aims with the National Accord. The 1967 platform is based on common denominators, Hamas has its own platform, which is that we have not and will not recognize Israel no matter the costs.

Al-Monitor: What is your position on the protests in the West Bank and the results of your missiles that hit Tel Aviv?

Bardawil: What is happening in the West Bank is a natural response to the Israeli criminal violations of the rights of the Palestinian people, from the killing of prisoners through starvation and torture and the psychological suffering caused by the checkpoints, to the settlers’ rampant racism and Judaization of the land. These factors have caused overwhelming outrage, and the people cannot be kept from revolting. Hamas is not the moving force behind the Palestinian people. What is happening in the West Bank is a natural reaction given the situation there, and we expect it will grow into the third intifada, whether they quash it today or it ignites today. Hitting Tel Aviv lifted the spirits of all of the Palestinian factions, and it played a part in the events unfolding in the West Bank. Fatah and Hamas, although we may disagree over the mechanisms for resisting the occupation, at the end of the day we all oppose Israel because it has violated everyone.

Al-Monitor: What is your position regarding the resistance rockets that fell on Asqalan on Tuesday [Feb. 26]?

Bardawil: This is the Israeli narrative not ours. Israel wants to get away with what it did and make the people forget about the original crime of murdering the martyr Arafat Jaradat. This could boil over into martyrdom operations and rocket launchings that will be outside Hamas’ or any other group’s power to contain. However, this narrative about the rockets is baseless. We will follow up with the respective authorities, and if it is found that there is truth to these claims, then in any event it would be a natural reaction given the current atmosphere of outrage.

Al-Monitor: What of the indirect negotiations with Israel?

Al-Monitor: It has been said that the repression of freedoms in Gaza has been at its highest during Hamas’ time in power. How do you respond to that?

Bardawil: Much is said in the campaigns of political warfare against Hamas. If it suppresses liberties in the West Bank, it would justify it by saying that Hamas is also doing this in Gaza. These are merely political projections. When human rights organizations talk about oppression in the West Bank, they always link it to oppression in Gaza because they are afraid of the outrage that would follow if they didn’t. We, as members of the Legislative Council, are on the lookout for human rights violations, and we strive so that there are no incidences that could be called oppression of people's liberties. We are trying to restore security to the streets of Gaza, and even if we used force on occasion, our goal was clear — that being to restore security and end violence.

Abeer Ayyoub is a former human rights researcher turned journalist whose work has appeared in Al-Masry al-Youm, The Daily Mirror, and Haaretz.