Russia may discuss with President Mahmoud Abbas during his visit to Moscow this month the issue of reconciliation with Fatah’s dismissed leader Mohammed Dahlan, who visited Russia recently, but developments on the ground do not bode well. 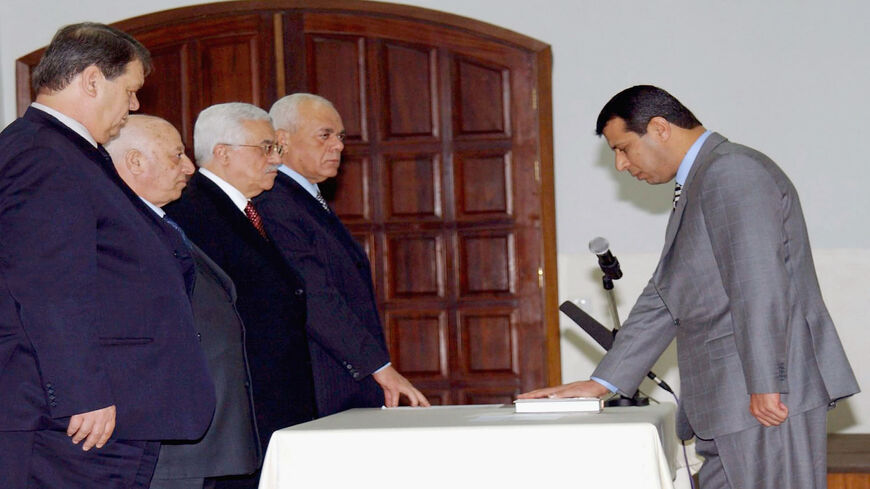 RAMALLAH, West Bank — The visit of the dismissed Fatah leader Mohammed Dahlan to Russia Nov. 2 and his meeting with Russian Foreign Minister Sergey Lavrov raised questions about the visit’s agenda and timing, as it preceded the visit of President Mahmoud Abbas to Moscow scheduled for Nov. 23.

A Fatah leader told Al-Monitor on condition of anonymity that contacts were made with Russian officials who told us that "Dahlan’s visit came at the request of the United Arab Emirates [UAE]. This is why some fear that its aim is to sabotage the upcoming visit of President Abbas.”

He said that Dahlan might have urged Russia to intervene with Abbas in order to bring about a reconciliation within the Fatah movement.

On Nov. 5, Turkish Anadolu Agency quoted Dimitri Diliani, a leader close to Dahlan, as saying, “Russia is mediating to bring about a reconciliation within the Fatah movement, and Russian Foreign Minister Sergey Lavrov is mediating and deploying efforts to put an end to the Fatah division between Dahlan’s current and Abbas’ Fatah movement.”

Diliani stated, “Dahlan announced during the meeting with Lavrov his readiness for internal reconciliation in Fatah.”

However, he subsequently denied this statement.

The conflicting statements of the reformist current regarding the presence of Russian mediation could be justified by its unwillingness to discuss the issue in the media given the nebulosity of the outcome of such mediation and Abbas’ previous strong rejection of such mediation. Also, the reformist current probably does not want to nip the Russian efforts in the bud, let alone embarrass Russia in the event Abbas refuses to mediate, and this is very likely.

Several reasons prompted Dahlan to visit Moscow at this specific time. Chief among these is Abbas’ visit to Moscow and Dahlan’s reliance on Russia to play a role in mediation with the encouragement of the UAE. This is especially true in the lead-up to the Fatah general conference scheduled for March 21, 2022. During this conference, a central committee for the movement, the highest leadership body, and a revolutionary council are elected. Consequently, bringing about reconciliation at this time would allow Dahlan and his movement to be present at the conference, and by extension, in the movement’s leading bodies.

The competition between Palestinian leaders over the succession of Abbas is no longer a secret, as this issue is tackled in the media and political statements, but Dahlan’s chances of holding an official position seem to be very slim in the absence of reconciliation.

On Nov. 6, Lebanese newspaper Al-Akhbar quoted unidentified sources as saying that Dahlan is hoping for an imminent Fatah reconciliation in light of the current Palestinian situation and what lies in store at the Palestinian level following Abbas’ departure, especially as the reformist current finds itself deeply affected by the Palestinian intelligence service penetrations aimed at returning dissident members to the ranks of the Fatah movement, on the condition that they announce their disavowal of Dahlan.

The spokesman for the Democratic Reform Current in the Fatah movement, Imad Mohsen, told Al-Monitor that Dahlan and his accompanying delegation discussed many political issues with the Russian side, as Dahlan reiterated the need to reconcile with Fatah, being the united force that is able to lead the national project.

Asked whether there was Russian mediation for reconciliation within Fatah, Mohsen said, “We have no response or position from the Russian side, and we cannot speak for them.“

“We did not ask anyone to intervene as a mediator for reconciliation,” he noted.

He said, “The reformist current responded to 10 previous mediation attempts to bring about a reconciliation within Fatah, and each time we would be confronted with the exclusion and marginalization team,” in reference to Abbas’ rejection of such a reconciliation.

Mohsen pointed out that the previous mediation attempts were carried out by Gulf, Arab and European countries as well as Palestinian parties.

He added that the last serious mediation attempts were based on the initiative of the Arab Quartet — Saudi Arabia, the UAE, Jordan, and Egypt — which asked Abbas and the Central Committee to put an end to the division plaguing Fatah and welcome whoever was dismissed and expelled. At the time, Abbas showed an immediate response, as he formed a committee to study the issue of the dismissal, but he held the seventh conference in November 2016, which shows his rejection of the mediation.

Asked whether the doors of reconciliation have been permanently closed with the movement, Mohsen said, “Our doors to reconciliation will remain open, but on the basis of ‘no exclusion, no expulsion, no dismissal.’ All the parties that previously mediated told us, 'It seems that the problem with President Abbas is personal.'”

Abbas Zaki, member of the Fatah Central Committee, told Al-Monitor that there is no such thing as a reconciliation with the “Mohammed Dahlan current” at the Fatah table.

Zaki pointed out, “Any person who did not individually and openly declare hostility to and disagreement with the movement nor resorted to any Arab party [in reference to the UAE] to antagonize the Palestinian position can have their request to return to the movement considered, should they desire to do so and once they present an apology and a letter of mercy.”

He played down the importance of Dahlan’s visit to Russia and said, “The UAE has asked Russia to receive Dahlan,” who has proven his affiliation with Abu Dhabi, whose normalization of ties with Israel is in full swing.

He noted, “Finding a solution to Dahlan’s problem would be tantamount to solving the UAE’s problem.”

It has been almost 10 years since the dismissal of Dahlan from the Fatah movement. Dahlan consequently resorted to the UAE, and during these years, Abbas refused various Arab mediations to stop the procedures against Dahlan and bring about a reconciliation with him, but to no avail.

The same fate probably lies in store for the Russian mediation efforts, if any.