Has Fatah abandoned its founding principles?

The seventh Fatah congress only further confirmed that Fatah is a ruling party, not a liberation movement. 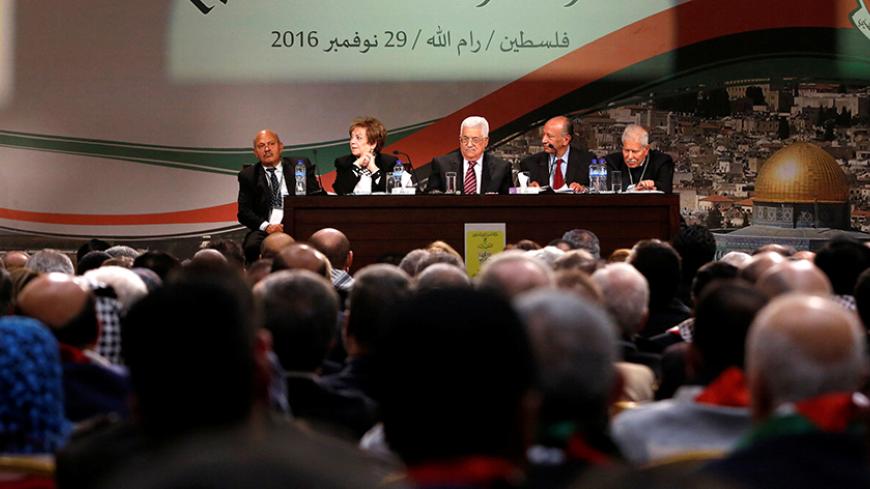 RAMALLAH, West Bank — Fatah’s seventh congress came to a close Dec. 4, after its election of a new Central Committee and Revolutionary Council. During the five-day conference, Fatah further entrenched itself as a ruling party that is committed to agreements with Israel as opposed to a national liberation movement with a variety of political views. This was solidified when the movement adopted the Palestinian Authority (PA) political program, which is based on negotiations and coexistence with Israel, even though this program has proven to be a total fiasco since the signing of the Oslo Accord in 1993.

Most of the 1,400 congress members are employees of PA agencies and ministries and receive their salaries from the PA, not Fatah. On top of that, the conference was held at the headquarters of the Palestinian presidency, or the Muqata, in Ramallah, which is supposed to be a state institution, not an institution that serves a party or a movement under the protection of security services.

Palestinian President Mahmoud Abbas was elected as head of the movement on the first day of the conference. On the second day, he delivered a three-hour speech that more closely resembled a speech by a head of state, not a speech delivered by the head of a revolutionary liberation movement, as Fatah calls itself. In a speech that now serves as the political movement's program, Abbas focused on the PA’s political approach since its inception.

Mohammed Hourani, a Fatah leader and member of the Revolutionary Council, told Al-Monitor, “There should not be any separation at all between the PA and the Fatah movement. There should be a balanced relationship between Fatah as an organization with humanitarian and combative liberation missions and Fatah’s involvement in the PA, to implement these visions in partnership with other forces.”

Hourani said, “The unfair and final separation of the Fatah movement from the PA is not on the table and is far from being realistic. … There is considerable overlap between the PLO and Fatah’s political programs, as there is no essential difference between the two.”

He added, “The PA program should be a little different from Fatah’s because the latter is an extension of a national liberation movement that is concerned with the right to self-determination under international law and the right of the Palestinian people to struggle, whereas the PA has [other] missions and services to achieve."

Najat Abu Bakr, a dismissed Fatah leader and current member of the Palestinian Legislative Council, told Al-Monitor that Fatah, being a national liberation movement, included all shades of the Palestinian people. But since the PA rose to power, the movement dissolved into the PA institutions and started defending its agendas.

“The Fatah movement’s only program is to protect the PA’s achievements, if any, given that these are incomplete amid the presence of the occupation [Israel] and the absence of a state,” Abu Bakr said. She added, “Fatah paid the price for all the mistakes of the PA and turned from a patriotic liberation movement to a ruling political party.”

Hani al-Masri, the director general of the Palestinian Center for Policy Research and Strategic Studies - Masarat, told Al-Monitor, “The Fatah movement started to get dissolved in the PA since the signing of the Oslo Accord, but this has been confirmed and entrenched during the seventh congress.”

He added, "Fatah is losing the multiple currents and political views that once distinguished it, and this indicates that it is becoming a mere PA party.”

The overlap between Fatah and the PA, as well as the calls to separate them, have long formed points of discussion that have yet to be settled. Several Fatah leaders support the separation of the two, including imprisoned Fatah Leader Marwan Barghouti, who received the most votes in the Central Committee election.

Fadwa Barghouti, Marwan’s wife, who was also elected to the Fatah Revolutionary Council, told Al-Monitor, “Marwan adopts the point of view calling for the need to separate Fatah from the PA because Fatah is a national liberation movement, not a ruling party.”

She said, “Before his arrest, Marwan refused several times to be a minister, as he wanted to be fully dedicated to his organizational work in the movement.”

Writer and political analyst Jihad Harb told Al-Monitor that since the signing of the Oslo Accord, Fatah members took over most of the PA's administrative and political positions, just as other ruling political parties do in other countries. This means that Fatah controls the regime institutions.

“The criticism directed to Fatah’s general congress for being held in the seat of the presidency indicates that the Fatah movement was dissolved into the PA and that the PA is part of Fatah’s membership,” Harb said.

Asked about Abbas' speech and his blurring of the lines between his positions in Fatah and the PA, Harb said, “The president's speech was a mixture [of his positions] as he is president of the PA and the Fatah movement, and it is natural for such mixture to take place because the political program of the ruling and biggest party will be adopted by the PLO and the PA.”

Asked about Fatah's identity as a movement of national liberation, Harb said, “The nature of the Palestinian stage we are going through is a stage of liberation and state institution-building, and this fact is fully reflected by the Fatah movement.”

While Fatah’s seventh congress managed to enshrine the movement as a PA party, the next stage in the era of President Abbas will not witness any changes on the political agenda. It will be a continuation of the previous phase, with all its broad outlines.