Will Egypt impose a 'Gaza supervisor' on Hamas?

By agreeing to dismantle its Gaza governing body, Hamas indicates that it is willing to concede to Egypt’s demands and form a unity government with Fatah. 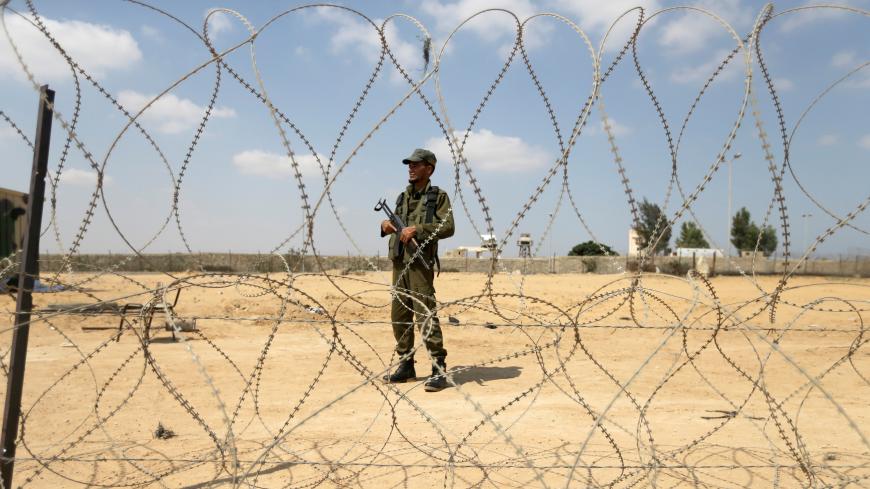 A member of the Palestinian security forces, loyal to Hamas, stands guard as men set up a barbed wire on the border with Egypt, in Rafah in the southern Gaza Strip, Aug. 24, 2017. - REUTERS/Ibraheem Abu Mustafa

At the end of the Sept. 11 meeting of Hamas leaders with Egyptian intelligence head Khaled Fawzy, the leaders announced that they are willing to dissolve the new council they established in the Gaza Strip, and instead consolidate a unity government with Fatah. Thus, in just one meeting in Cairo, Fawzy succeeded in doing what Palestinian President Mahmoud Abbas failed to do, despite the latter’s destructive sanctions imposed on Gaza. The Hamas top brass agreed to dissolve the shadow government set up by the new leader of the movement in Gaza, Yahya Sinwar.

Since April, Abbas had imposed on Gaza several sanctions, including the darkening of the Gaza Strip (by refusing to finance its electricity supply), cutbacks in the salaries of the Palestinian Authority’s employees in Gaza and even cessation of funding for medical services and maintenance of hospitals. These sanctions intensified the humanitarian crisis in Gaza. But despite all that, Hamas was not willing to forfeit the new council. This was Sinwar’s declaration of independence in the Gaza Strip, which turned out to be a serious mistake on his part. Sinwar tried to flex his muscles and prove that he is capable of coping with the difficulties and obstacles placed in front of the movement. But very quickly it became clear to the Hamas leadership that their new Gaza leader was a political novice who did not anticipate the results of his steps in advance.

“After the terrible suffering that [Sinwar] generated, and continues to impose on the almost 2 million residents of the Gaza Strip, the Hamas leaders are returning with their tails between their legs,” said a high-placed Fatah source from the West Bank, speaking to Al-Monitor on condition of anonymity. “What was he thinking? And what did [Hamas political bureau head] Ismail Haniyeh do to stop him?” Now, both Sinwar and Haniyeh are trying to turn the clock back in appealing to Abbas to be a partner in administrating Gaza via a unity government. Will Abbas accept the invitation? Will he be ready to enter Hamas’ sickbed, when Hamas runs an army that is larger than all the Palestinian security apparatuses in the West Bank, and even fund all this?

“He might not have a choice,” said the Palestinian source, raising the great dilemma faced by the Palestinian president: Proper relations with Egypt are important to Abbas these days when he is planning to embark on important international diplomatic initiatives. Egyptian President Abdel Fattah al-Sisi is an important key figure. Without his support, Abbas will find it difficult to recruit the pragmatic Arab countries to his side. On the other hand, he will not want to carry Hamas on his back during the next fateful year. According to Fatah officials, this may be Abbas’ last year in power due to his advanced age. Moreover, after the World Bank released an optimistic prediction for the Palestinian market (West Bank and Gaza) of a 7% growth (assuming that the correct economic steps are taken), Abbas has no reason to pour millions of dollars into Hamas at the expense of the West Bank. On the other hand, Gaza residents will not view the Palestinian president as their leader after divorcing himself from the Gaza Strip and abusing its residents with sanctions.

Cairo had two main reasons to push for a thaw in relations between Fatah and Hamas and for establishing a unity government in Gaza. The first is its desire to prevent Hamas from assisting jihadi elements in the Sinai Peninsula, and to cause the organization to cooperate with Egyptian efforts against the Islamic State. The second reason is Cairo’s justified concern that a severe humanitarian crisis in Gaza will threaten Egypt’s security as well. After Hamas’ coup in June 2007 and the imposition of a blockade on Gaza by Israel, hundreds of thousands of furious Palestinians knocked down the walls of the Philadelphi Corridor — the steel wall Israel put up between Gaza and Egypt in the Rafah region — in an attempt to loosen the noose around their necks.

“There is no doubt that Egypt is aware of the dangers and is doing everything it can today in order to avert such a scenario of [a severe humanitarian crisis] that is more imminent than ever before,” the Palestinian source told Al-Monitor. According to him, Egypt is also concerned about its image in the Arab world; they do not want to be viewed as siding with Israel in order to starve 2 million Muslims living under siege in Gaza.

Even if a unity government does arise, there will still be a weighty bone of contention between the sides. The Egyptians want to appoint someone of their own to supervise Hamas’ activities. This man is former Fatah senior member Mohammed Dahlan. Three months ago, in the midst of the electricity crisis, Sinwar met with Dahlan in Cairo. Several days after the meeting, the Palestinian Maan news agency published documents that, it asserted, testify to the fact that Sinwar offered Dahlan during this meeting the position of Gaza’s next prime minister. Dahlan denied this. One of his close associates in the Gaza Strip told Al-Monitor that Dahlan was offered an official function in the talks, but not that of prime minister. According to the Gaza source, Dahlan would not be willing to serve as prime minister under Hamas, but what was under discussion was the role of supervisor of the Gaza administration.

Nevertheless, it is clear that Abbas would not be willing for his bitter political rival Dahlan to serve in any position at all. Therefore, the name under discussion now is that of Samir al-Mashharawi, Dahlan’s right-hand man who was partner to the conciliation efforts. Mashharawi recently visited Gaza and, according to the Gaza source, the Egyptians hope that Mashharawi will be a key figure in closing a deal with Hamas, Fatah and Dahlan — a deal that will ultimately lead to the alleviation of the humanitarian situation in the Gaza Strip.

At the moment, all of this hinges mainly on Abbas’ willingness to reconcile with his two enemies — Hamas and Dahlan.