Dahlan preps for return to Gaza

Former Fatah senior official Mohammed Dahlan is venerated now in the Gaza Strip as the man who closed the deal with Egypt to renew electricity flow. 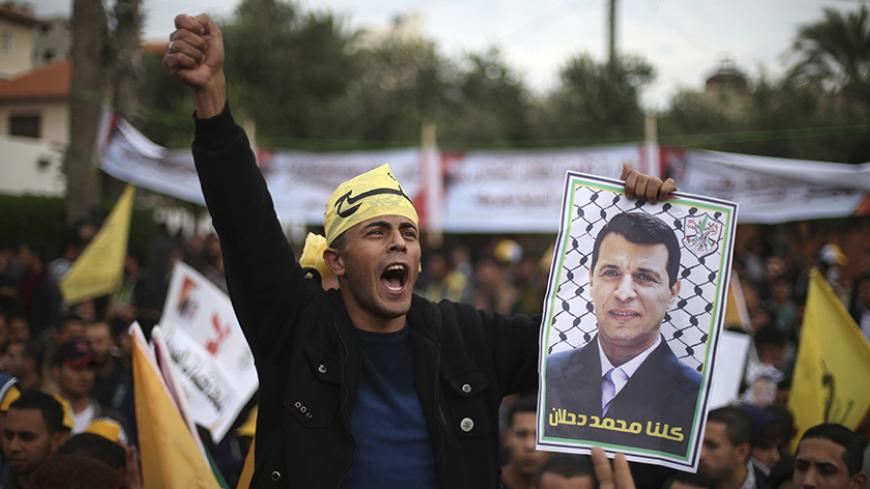 A Palestinian supporter of the former head of Fatah in Gaza, Mohammed Dahlan, holds a poster of Dahlan during a protest against Palestinian President Mahmoud Abbas in Gaza City, Gaza, Dec. 18, 2014. - REUTERS/Mohammed Salem

Samir al-Mashharawi, the right-hand man of Mohammed Dahlan, Fatah's former leader in the Gaza Strip, arrives in the coastal enclave next week. Dahlan’s supporters view Mashharawi’s arrival as the advent of his return to his roots within the framework of the new alliance forged between him and Hamas with Egypt’s mediation. Just a decade ago, Mashharawi, like Dahlan, was considered Hamas’ greatest enemy. During the 2007 uprising that brought Hamas to power, its armed wing Izz ad-Din al-Qassam Brigades fired rockets toward Mashharawi’s house in Gaza’s Rimal neighborhood. As far as Mashharawi is concerned, the attempt to wipe him out was an act of ingratitude on the part of the man who was to become the movement’s leader, Ismail Haniyeh.

Years earlier, a wonderful friendship was forged between Mashharawi, who was a hardcore Fatah member, and Haniyeh. When Israel launched a campaign of targeted eliminations against the Hamas leadership and took out its heads — Sheikh Ahmed Yassin and his successor, Abdel Aziz al-Rantisi — in 2004, Haniyeh found refuge in Mashharawi’s house. Haniyeh, at the time a personal aide to Rantisi, disguised himself as a woman and fled to Mashharawi’s house, evading the fearsome guns of the Israeli Apache helicopters.

Three years later, when the armed wing of Hamas tried to assassinate Mashharawi, Haniyeh did not say a word and did not condemn the armed men willing to take out any Fatah member close to Dahlan, even one to whom Haniyeh owed his life.

Much has been written about the surprising alliance formed in recent months between Hamas and its former archenemy. Dahlan, also known as Abu Fadi, is now considered the savior angel of Gaza’s residents and their Hamas leaders after Palestinian President Mahmoud Abbas withdrew his support from half his people (the residents of Gaza) in order to punish Hamas.

Last month, Egypt sent a million tons of diesel oil to Gaza to enable the activation of its disabled power plant. A senior Palestinian source told Al-Monitor on condition of anonymity that Abbas’ people in the West Bank called the director of the power station Abu Nabil and threatened him. They reportedly told him that if he accepts the shipment — the result of the labors of Abbas’ bitter rival Dahlan — he would make sure that the director was fired. The station head did not give in to the pressure and told the callers that Dahlan was the savior of Gaza’s 2 million besieged residents, and that he had full approval to accept the fuel from those who were once considered Dahlan’s biggest enemies, the Izz ad-Din al-Qassam Brigades.

Those already enjoying the fruit of the Hamas-Dahlan reconciliation are his people residing in Gaza, who for years were afraid to speak up. On the one hand, they did not want to anger Hamas, and on the other they feared Abbas’ people in Gaza.

Mashharawi’s impending return to the Strip after a decade is not simply a private visit to see his relatives, whom he left in a panicked rush during the uprising. It is also designed to create a mechanism for saving Gaza from collapse as part of the Egyptian-mediated Dahlan-Hamas deal. “Mashharawi was present during all the discussions in Cairo,” one of Dahlan’s people told Al-Monitor on the condition of anonymity.

Mashharawi was known in the past as “the mediator” because he was able to settle disputes between Hamas and Fatah for over a decade from the time the Palestinian Authority was established until the Hamas uprising that kicked Fatah out of power in Gaza. He will now have to learn the lay of the land in order to understand the current balance of power in the Strip, given the split within Hamas and the power struggles between its armed and political wings. He will submit his findings to Dahlan.

“Abbas never thought in his worst nightmares that the vacuum he was leaving in Gaza would be filled by Dahlan [whom he accused of trying to oust him] and his friends,” a Gaza security source told Al-Monitor on condition of anonymity. “But Abu Fadi had no choice but to mobilize to save his people.”

Posters and billboards placed recently throughout Gaza, in addition to sprayed graffiti, say, “The President (Abbas) murders children.” The campaign followed a decision by the PA to stop funding medicine and medical equipment for Gaza’s hospitals as part of the sanctions imposed by Abbas on the Gaza Strip. The Palestinian Health Ministry in the West Bank also stopped covering the hospitalization costs of severely ill patients requiring hospital treatment in Israel or the West Bank. Meanwhile, following angry public reaction to the deaths of babies and children denied life-saving treatment, the PA has restored its funding for such cases. Dahlan’s people say, however, that the coverage is more limited than it was before.

The senior Palestinian source said Mashharawi will set up a mechanism that will enable the transfer of severely ill Gaza residents to Egypt for treatment in Cairo or Alexandria hospitals, and, if needed, in the Gulf States. The source said a fund of several million dollars has already been established to cover the costs. “In the coming days we will see convoys of ambulances heading toward the Rafah crossing [to Egypt] so that people can get life-saving treatment,” he said.

Among all the jobs with which Mashharawi has been tasked, this has top priority, the senior Palestinian source said. Mashharawi has also been tasked with setting up a monitoring mechanism for the activation of the Gaza power station. This mechanism should enable constant contact between Egypt, Hamas and the station operators who are PA employees. These, according to the source, “have come in for constant harassment by Abbas’ people.”

In addition to all of the above, Mashharawi will arrange Dahlan’s visit to Gaza. Although no date has been set, his people estimate that it’s a matter of several weeks. “He will come once it becomes clear to all the residents of the Strip that Abu Fadi — he and no one else — is the only one responsible for the improvement of people’s lives after their president cruelly abandoned them,” the Palestinian senior source said.