Though he has no official standing, former Fatah leader Mohammed Dahlan's fundraising activities and influence guarantee a central role for him in any reconciliation between Hamas and Fatah. 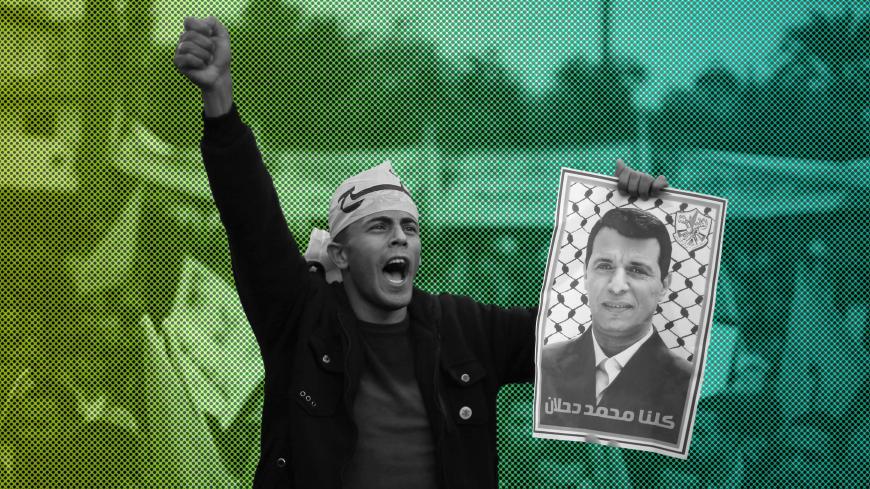 Hamas has announced that it is dismantling the Gaza administration it created half a year ago. On Sept. 16, the movement also said that it is willing to hold general elections in the Gaza Strip. Representatives of Palestinian President Mahmoud Abbas rushed to Cairo, where they met with Hamas' Gaza chief Yahya Sinwar and with his deputy Khalil al-Hayya. Sinwar was the man who decided to create the shadow government that nearly brought disaster to both Hamas and the people of Gaza. The two Hamas men discussed with Abbas’ representatives their desire to bring an end to the crisis between Hamas and Fatah as quickly as possible.

Even before this announcement, Hamas had taken another step toward reconciliation with Fatah. On Sept. 14, some 100 Fatah families who lost loved ones or suffered severe injuries or material destruction in the 2014 war received compensation in two ceremonies, one in Gaza City and the other in Khan Yunis. Dahlan raised the money in the Gulf states, and the Hamas movement distributed it to the families. The families received $50,000 each, and another 700 families are waiting to receive compensation as well. "Their time will come, too," a source close to Dahlan in Gaza told Al-Monitor on condition of anonymity. He went on to say that Hamas is hopeful that all of the families will receive compensation by the end of the year.

To pay them all, Dahlan will have to raise some $35 million more. "Quite a few families lost their homes in the Gaza war and [some] victims are crippled, so they cannot work for their livelihood. This sum will be enough for them to cover their debts." He went on to explain that $50,000 is enough to buy a modest apartment in Gaza.

The move has implications far beyond the actual payments. According to the same source, "Dahlan recognized that reconciliation cannot be limited to a paper agreement if they want to turn over a new leaf. Without reconciliation that begins at home between the families of the injured and Hamas, it would be impossible to think about overall reconciliation between the movements. That is why Dahlan decided to work in concentric circles. The first circle is, of course, Gaza."

Dahlan’s supporters were present at the ceremonies. Hamas apologized and Dahlan's funds were distributed. Who would have thought? Once, not too long ago, the Izz ad-Din al-Qassam Brigades (Hamas' military wing) put a hefty price on Dahlan's head, but now he's raised the money that will lend substance to Hamas' apology and request for forgiveness, according to Dahlan's associate in Gaza.

Dahlan and his supporters in the West Bank and Gaza may have been purged from Fatah, but in private conversations with Al-Monitor, they reiterated that Abbas’ decision was illegal, and they were and continue to be loyal members of the movement. One of them claimed that Dahlan, whom they admire, is doing everything for "the sacred cause" of mitigating the suffering of his people in Gaza. He added that one way of doing so is to bring about reconciliation between Hamas and Fatah so that the two movements can wage a joint struggle against the blockade on Gaza and the Israeli occupation.

Dahlan’s supporters utterly rejected the notion that his fundraising activities were intended to restore his position in Fatah and help him replace his rival Abbas and lead the movement one day. But even if we assume that Dahlan’s intentions were free of any political ambitions, it is obvious that there can be no reconciliation between Fatah and Hamas without him.

The Fatah families in Gaza — both those who already received compensation and those slated to receive it later in the year — are well-aware of who raised these enormous sums of money for them and is helping them rebuild their lives. And when Hamas' representatives apologize and grant a generous financial compensation package, there is sure to be a rush of emotions, and some will find it within themselves to forgive the movement for the misery of the past decade.

"Abbas is trapped because he knows that his rival did more for the members of his movement than he did," said the Gaza source. "While Abbas was cutting salaries, firing people and causing a horrific humanitarian crisis in Gaza, Abu Fadi [Dahlan] set to work to fix what Abbas destroyed. How do you think people here in Gaza will treat Dahlan now, whether they originally supported him or not? Will anyone still want to keep him out? Will they really tell him, 'Thank you for all you've done, but now you can go?'"

So far, the Palestinian Authority (PA) has offered no official response to Dahlan's initiative in Gaza. Nevertheless, a Fatah source in the West Bank told Al-Monitor on condition of anonymity that for years, Dahlan and his people have been trying to purchase status in the movement and that it won’t work. He said that Dahlan's supporters may get stronger in Gaza and work together with Hamas, "but in the end, people will remember that he collaborated with Izz ad-Din al-Qassam when they expelled Fatah from Gaza during the coup and shot people in the legs, and are now pleading for reconciliation because they face a crisis."

Dahlan knows how to evoke all sorts of emotions from his rivals in Fatah and the PA. Even though he has no official standing, they know that nothing will happen if they don’t take him into account in any political deal between Fatah and Hamas.