The many currents within Fatah are at war as to whom should lead the movement and succeed President Mahmoud Abbas. 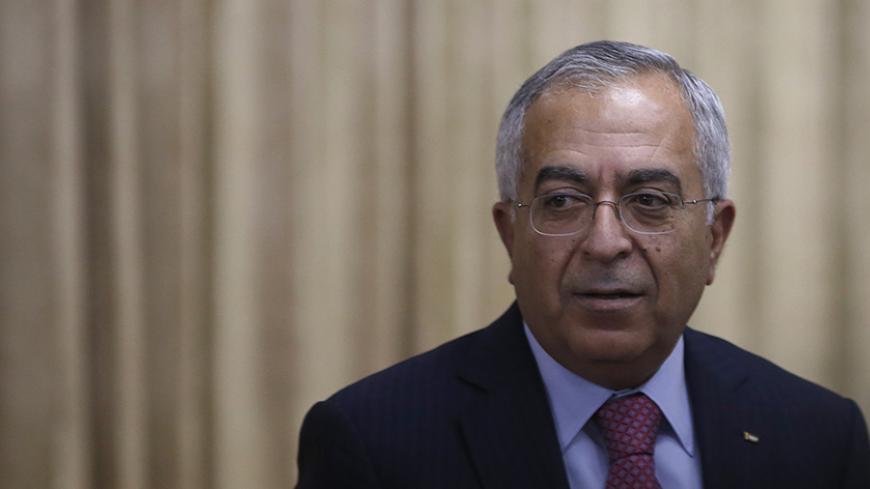 Palestinian Attorney General Abdel-Ghani al-Awewy made a surprise move June 21 to confiscate $1.6 million from the Palestine Tomorrow for Social Development, a foundation headed by former Prime Minister Salam Fayyad that empowers impoverished segments of Palestinian society. The Preventive Security Force in the West Bank had stormed the foundation’s Ramallah headquarters on Aug. 26, 2014, to investigate its activities.

A senior Palestinian security official told Al-Monitor on condition of anonymity, “Fayyad is suspected of exploiting his foundation for money laundering purposes, as well as the donations received by the foundation for his political purposes through coordination with [former Fatah leader] Mohammed Dahlan, who was expelled from Fatah. These two are trying to return to the Palestinian political scene by carrying out a bloodless coup against President Mahmoud Abbas and thanks to the support of regional and international players” — which the source did not name.

Abbas understands that Fayyad and Dahlan, who have close ties, are two potential candidates to succeed him, as they enjoy international and regional support. When he was head of the government between 2007 and 2013, Fayyad was attacked on the political and media levels by Fatah officials who claimed that he did not give priority to Fatah members in government positions. They also considered him to have been imposed on the Palestinian Authority (PA) by a US-international decision as far back as the era of late President Yasser Arafat, when he was appointed finance minister in 2002.

The confrontation between Abbas and Fayyad sheds light on the organizational differences plaguing Fatah amid several developments. Chief among these is the movement’s failure in the university elections in April; the polarization within Fatah ranks between Abbas’ and Dahlan’s currents; the continuing complaints of Fatah in the Gaza Strip about the marginalization it is experiencing on the part of the movement's leadership in the West Bank; and media leaks about regional understandings to find Abbas’ potential successor.

On June 17, Hisham Saqallah, a prominent Fatah activist based in the Gaza Strip, said that the current Fatah leadership has wasted the history and strength of the movement and brought it to a stage of confusion and extreme weakness, following the spread of organizational currents within it and the increasing geographical affiliation of its members. Saqallah said this has turned the movement into an entity where personal interests are achieved.

On an organizational level, Fatah is managed by the Central Committee, which is considered the supreme body in the movement and is composed of 21 leaders from the movement. The Fatah movement also includes the 81-member Revolutionary Council, and the leadership of the provinces in the Palestinian territories, neighboring Arab countries and some Western countries.

Fatah’s main weakness is that it is entirely integrated into the PA, which destabilized its organizational environment as the interests in the national cause and the conflict against Israel dwindled in favor of personal matters; Fatah members became more interested in collecting financial rewards and managerial salaries within the PA and its ministries.

This also created internal problems and led to a dispute between the movement’s currents to get closer to the political and security leaders. As a result, in March, the PA stopped paying the salaries of dozens of Fatah members against the backdrop of these differences.

Dozens of Fatah members, whose salaries were not paid for belonging to the Dahlan current, protested on May 22 in Gaza and demanded the closure of the office of Fatah Central Committee member Amal Hamad; they prevented the holding of a meeting for the movement scheduled to take place on the same day.

A senior member of the Fatah Central Committee told Al-Monitor on condition of anonymity, “Fatah held meetings in several Arab capitals earlier this year to achieve internal unity, but Abbas stated as a condition Dahlan's non-return to the movement’s Central Committee, of which he was expelled in June 2011.”

On April 17, an initiative was issued by Fatah leaders in Gaza to unite the movement, in light of the organizational weaknesses within its leadership. But Fatah’s parliamentary bloc described in mid-May this initiative as fragile and warned against any declarations made on behalf of the movement to implement foreign agendas, in reference to regional and international interference in Fatah’s affairs.

These are worrisome signs about the growing tension witnessed within Fatah in recent months. Although it seems too early to talk about an organizational split inside the movement, Fatah is suffering from internal splits amid the large number of leaders and loyalties to pay. Although it is not the first time Fatah witnesses disputes since its founding in 1965, the seriousness of the current challenges lies in the absence of a charismatic leader such as Arafat — a trait his successor Abbas lacks.

Attempts to heal the rift within Fatah prompted the Lebanese director general of general security, Maj. Gen. Abbas Ibrahim, to meet with Dahlan in Abu Dhabi in March and with Abbas in Amman in April, to discuss a reconciliation process between the two — to no avail.

The Lebanese efforts for Palestinian reconciliation emerged following escalating security tension witnessed in the Palestinian refugee camps in Lebanon, due to internal Fatah disputes between Abbas’ and Dahlan’s currents.

For his part, Fatah member of the Palestinian Legislative Council Alaa Yaghi announced April 22 that the failure of reconciliation between Fatah and Hamas amid the serious situation in Gaza and unstable conditions in the West Bank raised the importance of the internal Fatah reconciliation.

Fatah members in Gaza and the West Bank told Al-Monitor that since its loss to Hamas in the 2006 legislative elections, Fatah has been marred by settling scores and exchanges of accusations about the reasons behind this electoral loss, and most recently Fatah’s defeat in the university elections.

Fayez Abu Atieh, Fatah spokesman in the Gaza Strip, said June 1 that Fatah’s conditions in Gaza make it imperative for Abbas and the Fatah Central Committee to pay further attention to the movement in Gaza in order for it to enjoy a better organizational status, in light of the many problems the Fatah leadership there faces. These problems include the Fatah provincial elections in Gaza, the financial raises of Fatah cadres there and the issues Fatah employees have been facing since 2005 as they remain stranded to this day.

Regarding Fatah’s internal differences, a Palestinian official told Al-Monitor on condition of anonymity, “An Israeli-Egyptian-US security meeting was held in Cairo early June to discuss Abbas’ successor as president of the PA. Some candidates were excluded, such as Marwan Barghouti — a Fatah leader detained in Israel, because he is devious just like Arafat — and Jibril Rajoub, a member of the Fatah Central Committee, after Israel launched a media campaign against him in response to [Rajoub’s] demand to freeze Israel’s membership in FIFA in May.”

The official added, “Dahlan was retained as a potential successor to Abbas, given the large number of supporters he has in Gaza and the West Bank and his relations with Egypt and the Gulf states. Majid Faraj, head of the General Intelligence in the West Bank, was also retained as he controls the security services and maintains security coordination with Israel.”

Al-Monitor contacted several Fatah leaders, none of whom denied or confirmed the meeting. They noted that the moment of truth in the matter of Abbas’ succession is drawing near, which brings internal polarization in Fatah to its peak amid new Arab, Israeli and international developments, such as Egypt, Jordan and Saudi Arabia, as well as the United States, the European Union and Russia.

Finally, the conflicts plaguing Fatah — Abbas and Dahlan, the Gaza Strip and the West Bank — involve power struggles, money and decision-making positions, and not political disagreements in regard to the relationship with Hamas or Israel. Therefore, none of the currents is expected to halt its ambitious attempts to lead Fatah and rise to power, especially amid a supportive regional environment favoring one of the Fatah rival camps.