Israel is punishing Palestinian Authority officials in the hope that they will exert sufficient pressure on President Mahmoud Abbas to renew security coordination with Israel. 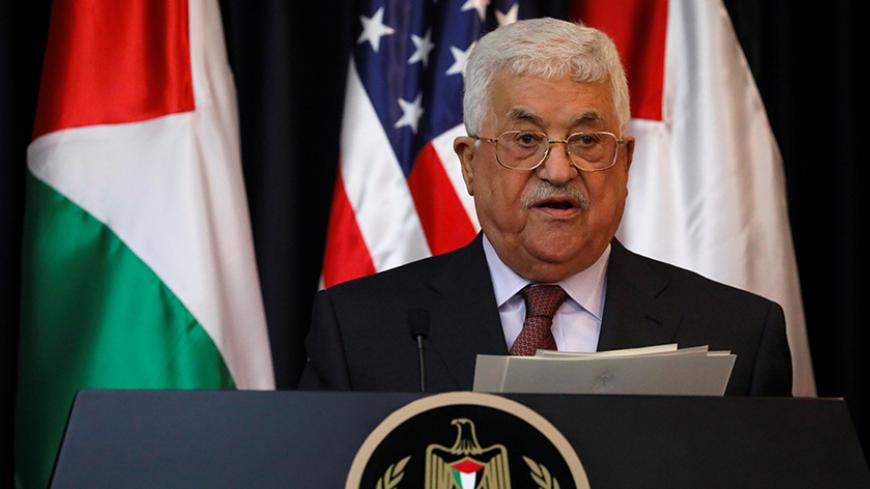 Palestinian President Mahmoud Abbas delivers remarks alongside US President Donald Trump (unseen) after their meeting at the Presidential Palace in the West Bank city of Bethlehem, May 23, 2017. - REUTERS/Jonathan Ernst

Following Israel’s July 16 decision to install metal detectors at the entrance to the Temple Mount/Haram al-Sharif, the Palestinian leadership announced the suspension of security coordination with Israel. The detectors have since been removed, but coordination has not been reinstated.

Palestinian President Mahmoud Abbas had withstood a barrage of criticism leveled at him over the past two years by opponents accusing him of collaborating with Israel, but he caved during the events last month on the Temple Mount sparked by the July 14 killing of two Israeli policemen at the site and Israel’s subsequent installation of the metal detectors. Now he no longer seems able to muster the great courage required to retake the high road.

The crisis over the Temple Mount is over, Israel has removed the metal detectors and cameras, and the Palestinians have declared victory in the volatile struggle over Al-Aqsa Mosque. The anti-Israel climate on the Palestinian street, however, has worsened, and the “victory” has awakened an appetite for more of the same by putting pressure on Israel — for example, by freezing security coordination.

When the PA informed Israel that it was severing ties in response to what it described as Israel's “violation” of Al-Aqsa, Islam’s third holiest site, Defense Minister Avigdor Liberman said dismissively, “It's a Palestinian need first and foremost. If they want it, they'll continue [coordination]; if not, they won't. We don't intend to chase after them over it or force the issue. We’ll manage either way.” He emphasized that Abbas needs the coordination more than Israel does.

Seemingly punitive Israeli actions taken over the past week appear to signal that Israeli security professionals disagree with Liberman’s attempts to minimize the importance of security ties with the PA. Actually, in recent days, US officials have told the head of Palestinian intelligence, Majid Faraj, that security cooperation must be resumed immediately, warning that the PA was playing with fire. It is unclear whether the American demand followed an Israeli request, but the fact is that joint efforts are underway to renew coordination — the Americans through diplomacy, the Israelis with threats.

On Aug. 2, Israeli soldiers raided the office of the Palestinian security forces in Hebron that deals mostly with civilian and crime-related issues among the city’s Palestinian residents. At the same time, Israel removed the checkpoint at the exit from Ramallah (near the Beit El settlement) that provided top PA officials with convenient, coordinated passage out of PA-controlled territory.

The Israeli security source confirmed that Israel had indeed adopted some measures against the PA, calling them “adjustments” to changing circumstances, such as the absence of formal coordination, rather than sanctions. A Palestinian security force member, however, told Al-Monitor on the condition of anonymity that Israel is clearly punishing the PA.

He warned that it was “making a serious mistake that would make renewal of coordination even harder’’ and added that despite the excellent coordination previously, Israel had implicated the PA time and again, when its troops entered West Bank Area A (under full Palestinian control according to the Oslo Accord) and carried out arrests. “We were perceived as having opened the door to them and even telling them, ‘Go ahead, arrest [so and so],’” he said.

Abbas has provoked great anger, especially in the Dheisheh, Jalazone, Qalandia and Balata refugee camps. The almost regular raids by Israeli soldiers on those camps to conduct arrests have led to a breakdown of trust between the local populations and the PA in general, and its security forces in particular. Residents of the camps consider Abbas an enemy and his security forces traitors to their people.

The Temple Mount crisis, which caused Abbas to cut short a visit to China and rush back to Ramallah, changed Abbas’ priorities. To restore some measure of public support, he was “forced” to set aside the sanctity of coordination with Israel for the sanctity of Al-Aqsa. Turning back the clock now seems almost impossible.

“The Israelis chose to undermine the Palestinian VIPs' status,” the Palestinian source told Al-Monitor. Top PA officials carry a card issued by Israel that enables them passage through specific checkpoints into Israel or into Jordan and from there to the rest of the world, virtually without undergoing security checks. Now, he argues, Israel is making it difficult for these officials to exit the West Bank “to make their lives miserable.” He explained, “Israel thinks they will put pressure on Abbas to restore the security coordination and with it their pampered existence. But it’s not that simple.”

Restoring security coordination will require careful preparation of Palestinian public opinion to dispel the perception of Abbas as a leader who does Israel’s bidding. The Palestinians will be seeking “revisions” to security ties with Israel to present them as achievements.

The PA's first demand, to appease refugee camp residents, will be an express promise from Israel to avoid surprise raids into Area A. The second demand will be to ease the passage of all Palestinians through Israeli roadblocks and to allow the presence of Palestinian police at the Allenby Bridge crossing into Jordan, where Palestinian are required to go through Israeli metal detectors. The issue of metal detectors has become very sensitive following the Temple Mount crisis.

Can Israel accede to these demands? The Israeli source told Al-Monitor that the Palestinians are going out on a limb, and there is no chance of them getting such concessions from Israel. The conclusion, therefore, must be that the resumption of security coordination is nowhere on the horizon.