Respected religious authorities dominated the protest movement and did much of the organizing during the past few weeks of crisis at Al-Aqsa Mosque in Jerusalem. 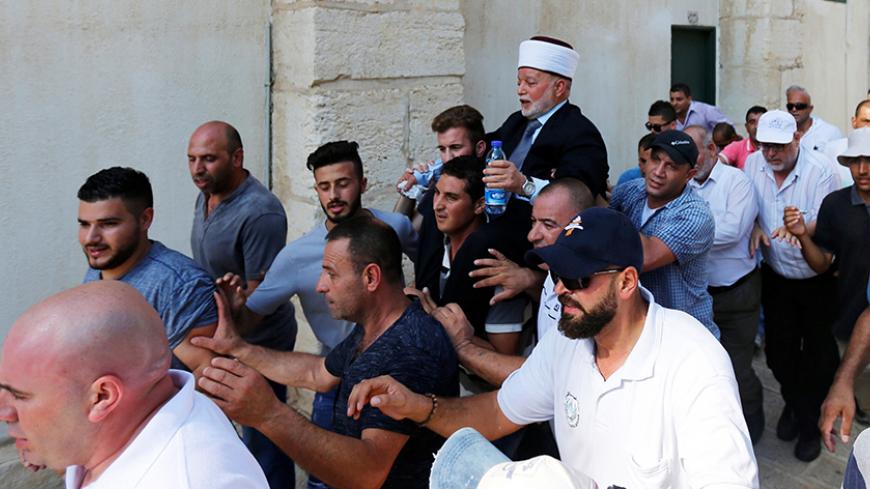 Sheikh Muhammad Hussein, the grand mufti of Jerusalem, is carried by Palestinians upon their entry into Al-Aqsa, a compound known to to Jews as the Temple Mount, after Israel removed the new security measures it had installed at the compound, Jerusalem's Old City, July 27, 2017. - REUTERS/Muammar Awad

RAMALLAH, West Bank — When Al-Aqsa Mosque was closed from July 14 until July 27 amid protests against Israel installing metal detectors and security cameras at the Lion’s Gate and several entrances, one group emerged to lead the demonstrations and organize prayers in nearby streets and squares.

Israel tightened security measures at Al-Aqsa following an armed clash inside the mosque on July 14 between three Palestinian youths and Israeli police, resulting in the death of all three along with two Israeli policemen.

The organizing circle includes the head of the Supreme Islamic Council, Akrama Sabri; the grand mufti of Jerusalem, Muhammad Hussein; the director of the Islamic Waqf Council, Azim Salhab; and Judge Wasif al-Bakri, all of whom are religious leaders who enjoy the respect and trust of Jerusalemites.

The group called on the Mourabitoun, the holy site's self-appointed monitors and defenders, to refuse to pass through the metal detectors before entering Al-Aqsa, and the Mourabitoun complied. The leadership also formed a technical committee to assess the situation inside and outside Al-Aqsa Mosque and identify any changes made by the Israeli authorities there in a report to the Jerusalem Islamic Waqf, which is responsible for the administration of Al-Aqsa Mosque.

Mohammed Abdel Latif, 50, from the Old City of Jerusalem, joined the Mourabitoun on July 14. He told Al-Monitor, “The Jerusalem street was completely dependent on the religious leadership as its guide, which played its role perfectly and made decisions in accordance with the people’s demands. We felt the religious leadership was a strong support system for us and gave us the strength to carry on.”

The role of the religious leadership overshadowed that of political forces. “The religious leadership did not have any political orientation and we found comfort in this. We were initially afraid political factions would take charge of the battle with the Israeli authorities because no matter which faction had ended up taking the lead, it would have only been doing it to stand out and serve its own interests,” Abdel Latif said.

“Political factions were absent when the events first erupted. After a few days, the factions found themselves unable to reach the public and influence the street, so they did their best to catch up,” Abdel Latif went on, adding, “The religious leadership should continue to work on meeting Al-Aqsa’s need for a supreme leadership. The religious leadership has our absolute support.”

Although the metal detectors were removed and the protests stopped, the role of the religious leadership continues. In a statement issued Aug. 1, the leadership warned against “escalating the situation again and dragging the entire region into unbearable crises, should the occupation insist on interfering in the affairs of Al-Waqf and Al-Aqsa Mosque.”

Sabri told Al-Monitor, “The religious institutions in Jerusalem were united in their decision due to the grave Israeli measures inside Al-Aqsa, inspiring the public to stand beside them.” He went on, “We have not presented ourselves as an alternative to anyone, and the field of action is open to all. Those who wish to contribute will be free to do so, but politicians failed to run the popular uprising against the occupation, and we needed a quick intervention. The religious leadership was spontaneously formed to keep up with events, fill the vacuum in the street and lead the people during the crisis.”

Sabri noted, “We need to continue our work because the battle is yet to end. Israel did not stop its project and measures at Al-Aqsa and it will attempt to change the situation there again. We need to keep following up on the events, fill Al-Aqsa with worshipers and be able to mobilize the public if need be. Our sole mission is to defend Al-Aqsa.”

The Palestinian Authority was late on the scene and is trying to keep up. On July 17, President Mahmoud Abbas arrived in China but decided to cut the visit short on July 19 and return to the Palestinian territories.

As soon as he reached the West Bank, Abbas held a meeting for the Palestinian leadership on July 21, one week after the confrontations broke out and the mosque was closed. At the meeting, Abbas announced a freeze of all contacts with Israel until it removed the metal detectors, and the provision of $25 million to residents, businesses and institutions in East Jerusalem in support.

The Palestinian political leadership seems to have realized the influence of the religious leadership on the scene in Jerusalem and rushed to support it. At a July 27 meeting held by the Palestinian leadership and attended by the grand mufti, the president called on the Mourabitoun to enter Al-Aqsa for prayer as soon as Israel removed the metal detectors.

“The rise of the religious leadership is due to its role in this religious issue at Al-Aqsa. This is why the decisions it made were strongly supported by the people,” Jerusalem writer and political analyst Rasem Obeidat told Al-Monitor. “The Jerusalem street has lost confidence in the Palestinian political forces and the PA,” he added.

Obeidat continued, “If political parties or the PA had called on Jerusalemites to protest, they would not have attended or interacted with them as they did with the religious leadership that succeeded in bringing everyone together.”

After heading the events at Al-Aqsa, the religious leadership still carries a great responsibility and faces further challenges as it works with Jerusalem's youth to form and prepare a local Jerusalemite leadership to take on new developments in the city.