Tension is rising at Al-Aqsa Mosque, where self-appointed Jerusalemite defenders are harassing Gulf Arab visitors who come under Israeli protection. 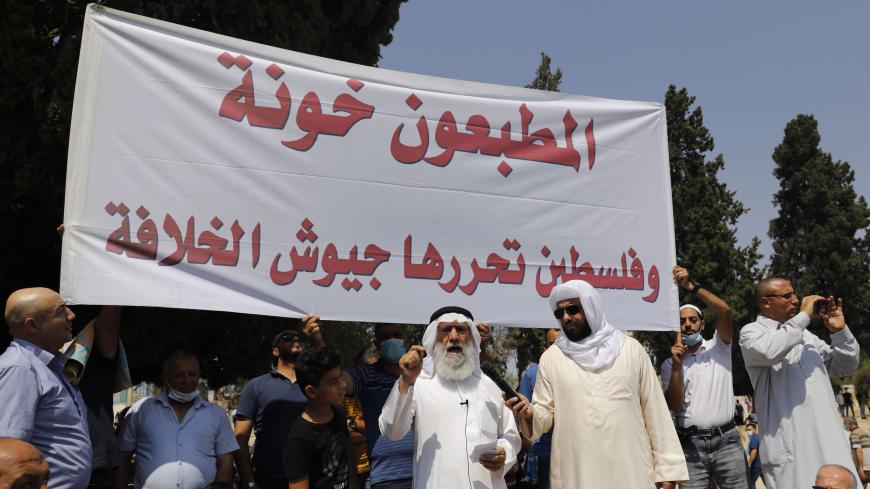 Palestinian Muslim worshippers hold a protest sign against the normalization of ties between Israel and two Arab states during prayers at Al-Aqsa Mosque in the old city of Jerusalem on Sept. 18, 2020. - AHMAD GHARABLI/AFP via Getty Images

RAMALLAH, West Bank — Conflicts have been erupting at Al-Aqsa Mosque in the city of Jerusalem between Jerusalemite worshipers and some Arab and Islamic delegations visiting the mosque under the protection of the Israeli police. These visits, which are bound to become more frequent in the coming weeks in light of the normalization agreements between Israel and the UAE and Bahrain, have provoked angry public and official Palestinian reactions.

On Oct. 20, an official UAE delegation visited Israel for the first time and signed a set of cooperation agreements. They included a visa waiver between the two countries and an agreement for direct weekly flights.

On Oct. 18, Jerusalemites confronted an Emirati group that had entered Al-Aqsa Mosque, Islam’s third holiest site, under the protection of the Israeli police.

A video of the incident went viral. A Jerusalemite was filming as a member of the group approached him to ask about the facilities at the Dome of the Rock The Jerusalemite replied, “Do not talk to me. People like you who normalize are not allowed to talk to us.” He then addressed another member, saying, “Show some respect and get out of here. You are garbage for normalizing,” as the group left the site.

On Oct. 15, another UAE group of 10 people visited Al-Aqsa and was confronted by Jerusalemites who were arrested by the Israeli police. They were later released and banned from the vicinity of Al-Aqsa.

Tension is rising in the mosque, as Jerusalemites and the Mourabitoun of Al-Aqsa (the holy site's self-appointed monitors and defenders) are determined to expel them and have frequently harassed Gulf Arab visitors to the mosque.

Palestinian Prime Minister Mohammad Shtayyeh commented during his government's weekly session on Oct. 19, “Entering Al-Aqsa must take place via the gate of its owners, and not through the occupation,” adding, “It is sad that some Arab delegations have entered Al-Aqsa through the occupation while Palestinian worshipers are prevented from entering the mosque to pray.”

The Islamic Waqf responsible, which manages the affairs of the Al-Aqsa compound, perceive these visits as extremely dangerous. The head of the Supreme Islamic Authority in Jerusalem, Ikrima Sabri, told Al-Monitor that the visits of Arab delegations through Israel are a product of the recent normalization agreements between some Arab countries and Israel, which is purposefully displaying its control over Al-Aqsa.

He added that those who normalize with Israel and come to Palestine through Israel are used by the Jewish state, indicating that the UAE visits are no better than settlers storming Al-Aqsa. They were afraid and stayed only minutes despite the heavy security provided by the Israeli police.

Sabri pointed out that those who confront these groups face arrest and banning by the Israeli police.

On Aug. 17, the mufti of Jerusalem and the Palestinian Territories, Sheikh Muhammad Hussein, said that it is forbidden for Emiratis to pray in Al-Aqsa, based on a fatwa issued in 2012, which specifies criteria for visiting Jerusalem and Al-Aqsa. The list does not include normalization.

Hatem Abdel Qader, a member of the Islamic Waqf Council, told Al-Monitor that the situation inside Al-Aqsa is tense amid such visits and calls by some Gulf Arabs for the Islamic Waqf to no longer be in charge of Al-Aqsa, in reference to a tweet by Saudi lawyer and writer Abdulrahman al-Lahim, who called on Bahrain, the UAE and Israel to “liberate Al-Aqsa Mosque from Palestinian thugs,” saying, “Those raging thugs are abusing Al-Aqsa.”

Abdel Qader added that Israel is trying to impose a fait accompli in Al-Aqsa and usurp or diminish the role of the Islamic Waqf to simple tasks such as raising the call to prayer.

A group of settlers stormed Al-Aqsa on Oct. 22 and demanded the Islamic Waqf be expelled from the mosque.

Abdel Qader said, “We support any Muslim who wants to visit Al-Aqsa, provided that they come through the Palestinian gate and through the Islamic Waqf. However, we have no business welcoming Arab or Muslim guests who come via the occupation and under the protection of the police, and we do not differentiate between them and the settlers who storm Al-Aqsa under police protection.”

He noted, “The Islamic Waqf will hold a meeting soon to discuss developments in Al-Aqsa and the occupation measures, including the visits of Arab delegations who normalize” with Israel, adding, “This issue will be thoroughly discussed in light of the expected weekly flights from the UAE to Israel.”

Abdel Qader said that he denounced these Arab statements and stances, saying they were like those of the settlers, expressing his fear that these Arab positions will encourage Israel to further oppress Jerusalemites and implement its plans inside Al-Aqsa. He pointed out that Israel does not care about Arab and Muslim visits to Al-Aqsa but seeks to exploit them to create a rift between Jerusalemites and Arabs in its war against Jerusalemites.