Palestinian President Mahmoud Abbas declared at the height of the Temple Mount crisis that he was halting security coordination with Israel; now it seems that contacts between the security services of both sides have been resumed. 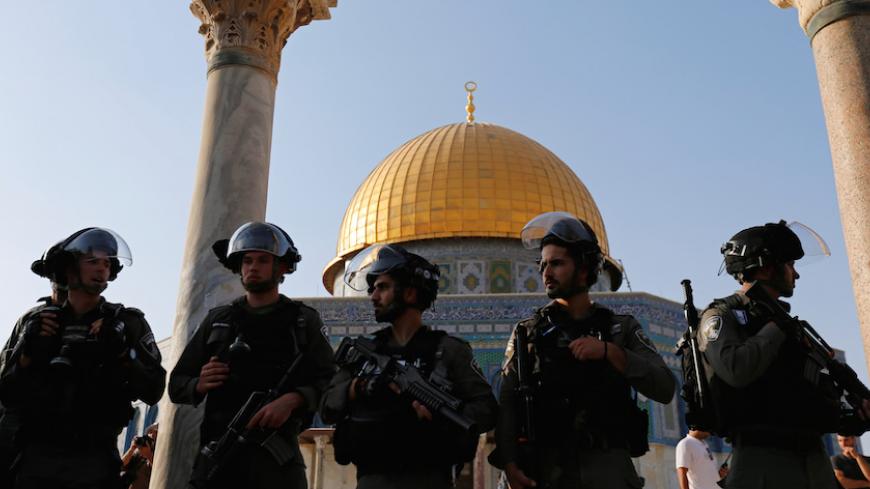 Israeli security forces stand at the compound known to Muslims as the Noble Sanctuary and to Jews as the Temple Mount, after Israel removed all security measures it had installed at the compound, and Palestinians entered the compound in Jerusalem's Old City, July 27, 2017. - REUTERS/Muammar Awad

Security coordination between Israel and the Palestinian Authority (PA) has been renewed, but no official announcement was issued — nor is one expected. Al-Monitor had learned about it from Israeli defense sources who spoke on condition of anonymity. On July 21, at the height of the crisis triggered by the shooting death of two Israeli policemen at the Temple Mount compound, Palestinian President Mahmoud Abbas declared he was suspending security ties with Israel. The move was intended to prove to the Palestinian public that Abbas was taking a tough line with Israel over its placing of metal detectors at the entrance to the Temple Mount/Haram al-Sharif site, a move perceived in the Arab world as a violation of the fragile status quo there.

Abbas had initially not intended to halt security coordination with Israel. When Palestinian journalists asked PA officials whether the suspension of ties with Israel included a stop to the security coordination, the officials hemmed and hawed and did not provide a clear answer. The Palestinian leadership in Ramallah understood that absent an unambiguous announcement to the effect that the security ties had also been halted, they would not be able to appease public opinion. Abbas then made a dramatic announcement in which he said that he was freezing cooperation with Israeli security echelons until things at the site return to the way they were. But even after Israel removed all its new security devices, continued public pressure made it hard for Abbas to officially announce that business with Israel was back as usual.

Security officials on both sides say the coordination between them has foiled dozens of terror attacks against Israelis in recent years. But so as not to be perceived as caving in too easily, the Palestinian president presented Israel with a set of demands for renewing security ties. These included a clear Israeli pledge to stop raids into the Palestinian controlled Area A of the West Bank to carry out arrests of Palestinians wanted for questioning. The Palestinians also demanded that Israel ease the passage of Palestinians into Israel and through the Allenby Bridge from the West Bank to Jordan (including the deployment of Palestinian police alongside the Israelis conducting security checks at the crossing). Still, no one in the PA was surprised when Israel rejected these conditions out of hand.

Palestinian security officials, especially intelligence chief Majid Faraj who is considered a moderating influence on Abbas’ circle, understood that the suspension of the security ties with Israel could not continue for long. The coordination serves the interests of the PA, too. Israel’s well-developed intelligence apparatus regularly passes on sensitive information to the heads of the Palestinian agencies, who use it to thwart domestic threats to Abbas and the PA’s stability.

However, US pressure appears to have played an even more significant role in the decision. As reported by Al-Monitor on Aug. 4, a team of American envoys headed by Jason Greenblatt conveyed a clear message to Faraj that a halt to the security coordination could end in disaster. In a phone conversation, Greenblatt personally conveyed the message to Faraj.

It now turns out that security coordination between the sides was restored on Aug. 4, without any formal announcement and with Palestinian security forces being sworn to secrecy about the move. The next day, Israeli troops had already detained dozens of suspects in the Jalazone and Balata refugee camps in the West Bank. Both these camps are located in West Bank Area A. Past experience indicates that Israeli soldiers coordinate their entry into these areas with Palestinian police. A resident of the Balata camp in the town of Nablus, a Palestinian journalist who spoke on condition of anonymity, told Al-Monitor that raids by Israeli special forces on such densely populated areas are regularly coordinated with the PA. This well-known fact fuels the public anger at Abbas and his people. There’s no way, he added, that the recent arrests were conducted without coordination with the PA.

A Palestinian security official who spoke to Al-Monitor refused to confirm that the reported arrests in the refugee camps were carried out in coordination with the PA. He said Abbas had announced in the past that he was opposed to Israeli military raids into areas under sovereign Palestinian control. Nonetheless, he noted that in Abbas’ announcement of a halt to security ties, he had left an opening for coordination of urgent matters.

At the end of last week, Israel also handed back to the PA the bodies of four Palestinians who had carried out attacks against Israelis — another indication of “business as usual” between the sides. At the same time, Israel stopped issuing threats of planned sanctions against the PA if Abbas persisted in his refusal to resume the security coordination. On the night of Aug. 6-7, hundreds of Israeli worshippers prayed at Joseph’s Tomb, a site holy to Jews located in the PA-controlled city of Nablus. Obviously, such visits cannot be arranged without close coordination between the sides.

It remains to be seen whether the renewed security cooperation goes unnoticed by the Palestinian street. The families of those arrested in the latest Israeli raid on the refugee camps could well start agitating and highlighting the renewed links with Israel. Abbas’ opponents within his Fatah movement — former Fatah senior Mohammed Dahlan and Fatah senior (jailed in Israel) Marwan Barghouti — are waiting in the wings for an opportunity to attack Abbas. They will not hesitate to embarrass him.