The Palestinian leadership hopes that the friendship between intelligence chief Majid Faraj and Mike Pompeo, who will soon be appointed US secretary of state, will help thaw relations between Washington and Ramallah. 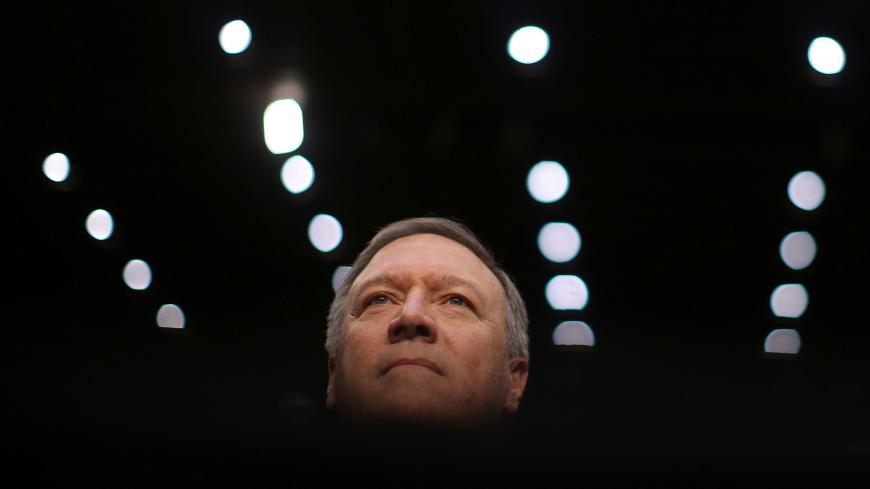 Mike Pompeo, then a congressional representative for Kansas, arrives to testify before a Senate Intelligence Committee hearing in Washington on his nomination to become director of the CIA, Jan. 12, 2017. - REUTERS/Carlos Barria

March 13 was a turbulent day for Majid Faraj, head of the Palestinian Authority's (PA) General Intelligence Service. In the early morning hours, he survived an assassination attempt that targeted Palestinian Prime Minister Rami Hamdallah’s convoy with a bomb. Hamdallah was visiting Gaza to inaugurate a desalination plant. The PA believes, however, the attackers were actually trying to kill Faraj. Fortunately for him, he was not in his own vehicle, which was the target of the detonation, but in Hamdallah’s car instead.

Before Faraj could even recover from the attack, he was informed that Mike Pompeo, director of the CIA and someone he considered a friend, had been appointed US secretary of state in the Donald Trump administration, replacing Rex Tillerson, who had just been fired. The Palestinians have not felt this relieved since the crisis that erupted last December between the United States and the Palestinians after Trump’s decision to recognize Jerusalem as the capital of Israel and relocate the US Embassy from Tel Aviv.

After Trump's election in November 2016, Palestinian President Mahmoud Abbas ordered the establishment of a think tank to examine ways to open new channels of communication with the administration, which was viewed from day one as being a biased, pro-Israel mediator. Even then, Ramallah was hanging all its hopes on Pompeo. It was a gamble, and it succeeded.

Faraj met with Pompeo in Washington in early February 2017 and managed to convince him that the PA could make a significant contribution to regional stability and efforts to contain the spread of radical Islam. One person close to Faraj told Al-Monitor that Pompeo was impressed by the personal story of his Palestinian counterpart. Faraj had grown up in the Dheisheh refugee camp, in the West Bank. His father had been killed by the Israel Defense Forces during the second intifada (2000-05), and his entire family had joined the Forum for Bereaved Parents (The Parents’ Circle), bringing together Israelis and Palestinians who have lost a family member in the conflict.

Pompeo responded to an invitation from Faraj and visited the PA-controlled territories that same month, a few days before Prime Minister Benjamin Netanyahu had his first meeting with Trump in Washington on Feb. 15. Pompeo met with Abbas in Ramallah and listened to his concerns that Trump and Netanyahu would work out an outline for dealing with the Palestinian issue without input from the Palestinians. Pompeo then reportedly advised him to maintain peace and quiet, so the Trump administration would keep them involved in the diplomatic process. Pompeo added that the administration would not neglect the Palestinian issue or the peace process. Abbas and Faraj asked Pompeo to arrange a meeting between the Palestinian president and Trump, and Abbas was, in fact, invited to the White House, in May 2017.

That was the beginning of a personal friendship between Pompeo and Faraj that ultimately led to the creation of a new channel of communication between the Palestinians and the Americans. The establishment of this new channel was encouraging, but it ended in enormous disappointment for the Palestinians.

Pompeo settled in to focusing on his work at the CIA, leaving the job of mediating between the Israelis and Palestinians to Trump son-in-law Jared Kushner, his adviser Jason Greenblatt and US Ambassador to Israel David Friedman, known as “the settler” among senior Palestinian officials. The American team as a whole was the “Jewish troika.” The three were immediately suspect because of their religion, but also because of the policies of the Trump administration, with its obvious pro-Israel tilt. Today the Palestinians feel that their suspicions and doubts were justified.

In contrast, the attitude toward Pompeo was different. Just before Trump made his announcement on Jerusalem, Abbas sent Faraj to Washington for a series of urgent talks with his friend Pompeo. It was too late, however. The die had been cast, and there was no going back. People close to Faraj said that Pompeo nevertheless asked the Palestinians to be patient and not to make any unilateral moves that might be harmful and end up making any chance at peace between the two peoples even less likely.

Now the Palestinian’s friend at the CIA has been appointed the top US diplomat. Tillerson, unlike his predecessors, was not involved in the talks with the Palestinians. He left that to Kushner, Greenblatt and Friedman. Tillerson only made statements concerning the Palestinian issue on two occasions. The first was when he informed a Senate hearing in June 2017 that the Palestinians had decided to stop making payments to families of convicted terrorists in response to the proposed Taylor Force Act to cut aid to the PA. (This turned out to be false.) The second time was in January 2018, when he ordered the US government to cut aid to the United Nations Relief and Works Agency.

Faraj’s confidant told Al-Monitor that it is still too early to rejoice, but Pompeo replacing Tillerson should improve the atmosphere and reduce Palestinian hostility toward the current administration. Nevertheless, no one expects radical changes to the White House's unbalanced policy in all matters concerning the Palestinian-Israeli conflict. The Palestinians have no illusions. Yet, although the decision to move the embassy can no longer be changed, there are other issues on which Pompeo could be of assistance, including reducing tensions between Trump and Abbas and stopping the administration from cutting economic aid to the PA.

Faraj and Pompeo's relationship was based on common interest. The head of Palestinian intelligence convinced his American colleague that the Palestinian security forces play an important role in the region by cooperating with Israel, but also by keeping Abbas — who plays an active role in keeping violence and radical Islam out of the Palestinian territories — in power. The Palestinians now hope that Pompeo will take steps to strengthen their security forces, especially after the assassination attempt in Gaza.

Ramallah also hopes that Pompeo in his new position will be able to keep the promise that he made to Abbas while still head of the CIA: If the Palestinians keep the peace, the Americans will keep them involved in the diplomatic process.