Nir Hefetz, who was a close associate of former Prime Minister Benjamin Netanyahu, claimed at his trial that the premier had endangered Israel’s security. 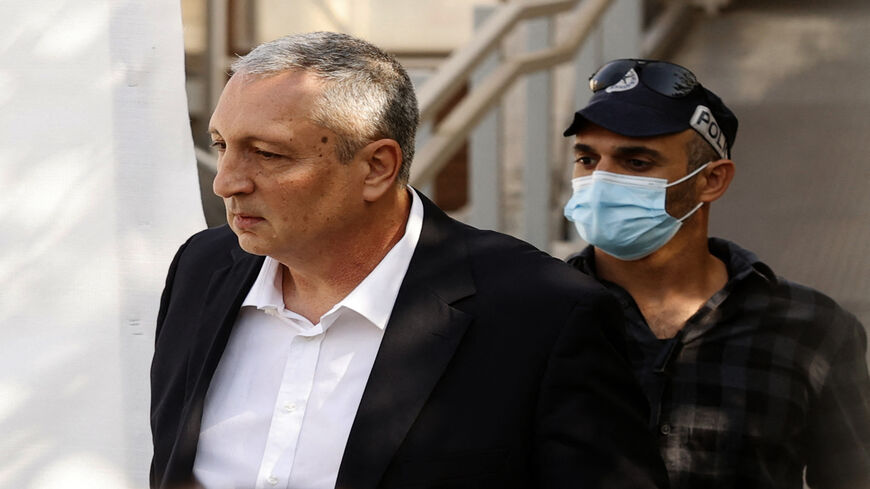 This political bomb was not supposed to blow up. It was detonated by accident Dec. 6 without advance warning in the Jerusalem District Courthouse where former Prime Minister Benjamin Netanyahu is standing trial on charges of bribery, fraud and breach of trust. The former prime minister’s defense attorney, Boaz Ben Tzur, was cross-examining the state’s star witness Nir Hefetz, previously one of the Netanyahu family’s closest aides, asking him whether he recalled what he had told police investigators regarding Netanyahu’s competence to lead Israel. Hefetz had total recall. Too late, a whispered comment from one of Netanyahu’s defense team tipped Ben Tzur off to the severe damage Hefetz’s answer could cause his client’s image.

Hefetz recounted in court what he had told the police, a tale that was not included in the charge sheet against Netanyahu because it was not a criminal offense, but its public blowback potential is clear. Netanyahu remains a public figure as head of the Knesset opposition and is relentlessly trying to bring down the current government and return to office. The account by one of Netanyahu’s closest confidants could tarnish his image.

Hefetz stared at the ball Ben Tzur had served, and hit back with a sure-handed strike. “I did not trick the investigators and did not mislead them when I said what I thought about a certain security-related affair,” Hefetz said. “I left my job working for Benjamin Netanyahu in September 2017 because I thought he was no longer fit to make security decisions due to the situation around him [apparently referring to the criminal trial distraction]. I stand by this, that to this day he is unfit to hold Israel’s security in his hands because of his situation. This is worse than a criminal issue. This could have ended with thousands of dead people.”

Within minutes, his testimony was out in the open. Part of what he recounted had already been reported in the past, but when the story is told in court by someone who was inside the innermost sanctum, it resonates far louder. According to Israeli media, the affair to which Hefetz alluded occurred in July 2017. Three Arab-Israeli citizens walked out of Al-Aqsa Mosque in Jerusalem toting makeshift submachine guns and shot to death two Israeli Border Patrol officers stationed at a gate of the highly volatile site. The government responded with a decision to place metal detectors at the entrance to the compound to prevent worshipers from smuggling in weapons.

The decision set off furious reaction in the Muslim world, which considered the metal detectors a sacrilege at one of Islam’s holiest sites. A wave of anti-Israeli terrorist attacks swept through the country and threatened to veer out of control. Reportedly, Military Chief Lt. Gen. Gadi Eisenkot and Shin Bet security agency Director Yuval Diskin warned Netanyahu that what had started out as an attack motivated by nationalist sentiment could quickly turn into a religious confrontation pitting significant parts of the Muslim world against Israel. According to the intelligence available at the time, the incident threatened a renewal of the so-called individual intifada, a series of lone-wolf terrorist attacks that began in the fall of 2015 and was put down in 2016 following a concerted effort on the part of the Shin Bet and the army. Israel’s security agency chiefs told Netanyahu that the metal detectors were not worth the risk, even as a 20-year-old Islamist entered Halamish, a West Bank Jewish settlement, and butchered three members of the Salomon family with a knife. “What is my life worth at a time when Al-Aqsa is being desecrated,” the terrorist Omar Abd Al-Jalil wrote on his Facebook page before setting out on his July 21, 2017, killing spree.

Netanyahu is known for being responsible and level-headed at such times. Throughout his career he has usually accepted the recommendations of security experts, distanced himself from military adventures and tried to avoid provocations, certainly ones involving the keg of dynamite resting uneasily on the Jerusalem site sacred to both Muslims and Jews, who call it the Temple Mount. But this time, so it seems, Netanyahu insisted that the metal detectors remain in place — despite the urgings of his military chief, military intelligence heads, regional military commander and others. He was warned, but stood firm.

Meanwhile, a wave of rioting and protests erupted throughout the West Bank and the Gaza Strip, and spilled over to Muslim countries. Riots broke out outside the Israeli Embassy compound in Amman, where an Israeli security guard unintentionally shot dead a Jordanian citizen, prompting a hasty operation to spirit him out of Jordan. Lone-wolf terror attacks resumed, peaking with the horrific Halamish killings.

The pressure on Netanyahu by security chiefs increased, but he continued to resist. According to reports and to sources that where close to Netanyahu at the time, at one of the discussions, the prime minister left the room more than once. He took phone calls from his son, Yair, who warned him against giving in to the security experts and removing the metal detectors. His wife, Sara Netanyahu, even showed up at his office during one of the consultations with security agency chiefs and reportedly told several of his aides that if he keeps giving in to them, he will start working from home.

Luckily, Netanyahu changed his mind and ordered the removal of the metal detectors, after being told repeatedly by security chiefs that the disadvantages of the devices’ deployment far outweighed its advantages. You do not really want to set the Middle East on fire and perpetuate the false myth that Al-Aqsa is under threat by the Jews, they said/asked him.

Theirs was not a rhetorical question. Those asking it were no longer sure of the answer. Netanyahu had become a changed man, very different from the pragmatic leader with a reputation for responsible judgment calls. It appeared others were exerting undue influence over him, concerning the affairs of state. That was reportedly the story Hefetz alluded to in court. That is what Netanyahu does not want Israelis to hear, but almost all his associates and people who worked with him in recent years know full well.