Nir Hefetz, a former aide and confidant to Benjamin Netanyahu, testified Monday in a long-running corruption case against the ex-Israeli prime minister. 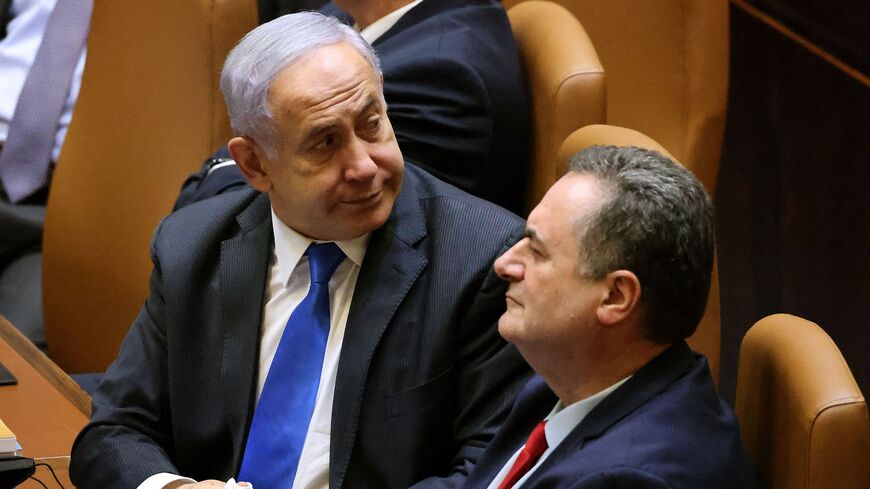 Outgoing Israeli Prime Minister Benjamin Netanyahu (L), accompanied by outgoing Finance Minister Yisrael Katz, looks on during a special session to vote on a new government at the Knesset in Jerusalem, on June 13, 2021. - EMMANUEL DUNAND/AFP via Getty Images

Corruption and nepotism
Courts and the law
November 22, 2021

The star witness in former Israeli Prime Minister Benjamin Netanyahu’s corruption trial testified on Monday that his ex-boss was more than a “control freak” who was obsessed with his public image.

Newspaper editor-turned-political operative Nir Hefetz is the prosecution's key witness in Case 4000, which centers on allegations that Netanyahu offered regulatory favors in exchange for favorable coverage on the Walla news site. The former premier faces accusations of bribery, fraud and breach of trust in three separate corruption cases.

Netanyahu, who was ousted in June as prime minister after 12 years in power, has pleaded not guilty and denied any wrongdoing.

The 72-year-old was at the Jerusalem District Court on Monday in his fourth court appearance since his trial began a year and a half ago. The Times of Israel reported that Netanyahu and Hefetz avoided eye contact throughout the session.

Hefetz left journalism in 2009 to serve as a spokesperson for Netanyahu’s government and later as a Netanyahu family spokesperson and media adviser. In a deal with investigators following his 2018 arrest in connection with the Netanyahu cases, Hefetz agreed to hand over audio recordings he had made of conversations with Netanyahu and his family.

On Monday, Hefetz told the court that Netanyahu spent as much time on media matters as he did on Israel’s security, adding that his "control over everything relating to media matters and his social media channels could not be higher.”

"If we use the term 'control freak,' he is much more than that," Hefetz said. "In everything relating to the media, he demands to know everything, down to the smallest detail."

Israel’s Channel 13 obtained leaked transcripts of Hefetz’ preparatory meeting with prosecutors. According to the news outlet, Hefetz will also testify that Netanyahu’s wife Sara took part in the hiring of spokespeople in the prime minister’s office. Hefetz reportedly said that government spokespeople were told their job required them to “correct the historical injustice done to Sara Netanyahu as a result of her husband’s public role.”