Netanyahu's freedom now on the line

Now that Nir Hefetz, the former adviser to Prime Minister Benjamin Netanyahu, has turned state's witness against his former boss, it appears to increase the likelihood the Netanyahu era is coming to an end. 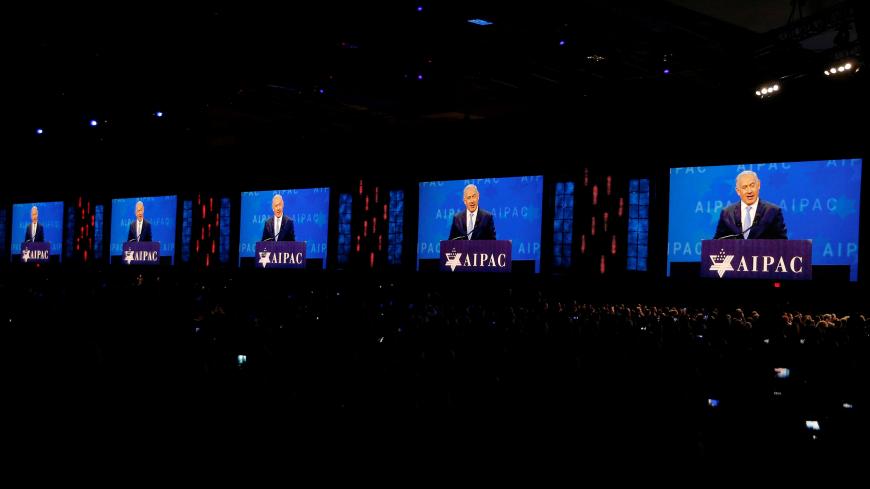 On one side of the Atlantic was a packed conference hall, where 18,000 American Israel Public Affairs Committee (AIPAC) delegates cheered on Israeli Prime Minister Benjamin Netanyahu in Washington. On the other side of the ocean was the crammed police interrogation room of the Lahav 433 unit in Lod. The distance between them on March 6 had never been greater.

Having met with President Donald Trump at the White House on March 5, the following day Netanyahu addressed AIPAC’s annual conference. He put on his usual show, exhilarating the delegates, who frequently burst into tumultuous rounds of applause. Meanwhile, at the nerve center of the Israel Police Investigations Unit, a string of state's witnesses tighten around the prime minister. So far, three of the people closest to Netanyahu have signed agreements with the police and the Attorney General’s Office to testify against their former boss in exchange for reduced sentences. Nothing this big has ever happened in Israel.

The third and most recent person to flip was Nir Hefetz, the former head of the National Information Directorate and Netanyahu spokesman who went on to become the spokesman for the Netanyahu family. No one could be closer to the Netanyahus. Hefetz is also more colorful and more dangerous than the other state's witnesses: former Netanyahu Chief of Staff Ari Harow and former Ministry of Communications Director General Shlomo Filber.

There is a news blackout on details concerning Hefetz’s testimony, but what is known is that he was granted immunity for whatever evidence he provided. Hefetz will not be indicted. He will not be convicted. He will not serve time, and he will not pay a fine. There is no greater proof that Hefetz is the ace in the hand of Police Commissioner Roni Alsheikh. He is the piece completing the puzzle. Hefetz will be spending many long days giving testimony at a government compound.

The safe assumption for now is that Netanyahu will not survive the cases piling up against him. If Case 4000 — involving Netanyahu’s relations with communication mogul Shaul Elovitch — proves to be an unimpeded case of bribery, it would be worse for Netanyahu than anything he ever imagined. It would most likely mean following in the footsteps of his predecessor, Ehud Olmert, to jail. He would be the second Israeli prime minister to end up in prison. All that remains unknown is the timetable, which Netanyahu is currently working on.

From Netanyahu's perspective, the situation isn’t quite so grim. The paradox is that the worse his legal situation becomes, the higher his poll numbers rise. Every investigation and every state's witness earn him and his party more seats. Recent polls paint a remarkable picture of Likud winning 29 seats, its strongest showing since the 2015 election, in which it won 30 seats.

Netanyahu owes his long political lifespan to his success in convincing the Israeli right that anyone opposed to him remaining in power is, by definition, a leftist. Although the investigations against him are being conducted by a police commissioner and an attorney general from Netanyahu's own circle and appointed by him, he has managed to drill into the minds of Likud supporters that the investigations are nothing more than political persecution and a coup attempt by the left and the media against a serving prime minister.

Netanyahu’s message is replete with fake news and other manipulations, but it works. Senior Likud members have so far avoided criticizing the prime minister, fearing revenge. Thus the Israeli right has closed ranks and come out to defend him. Public trust in law enforcement and the media is at a low point, with the legal system quickly losing respect as well. This phenomenon has implications for how determined Attorney General Avichai Mandelblit, a former Netanyahu Cabinet secretary, will be in proceeding against the prime minister. It is also why Mandelblit has approved agreements with so many state's witnesses. He wants to be absolutely certain, so he is playing it safe and slow.

Hefetz is expected to open a Pandora’s box involving almost the entire Netanyahu family. Because of him, Netanyahu will face more than just the legal issues pertaining to Cases 1000, 2000 and 4000. Recent comments by Hefetz to his associates suggest that he could reveal involvement by the Netanyahu family in decision-making on state security and other sensitive matters. It has already been leaked that Hefetz claims that Netanyahu is controlled by his wife, Sara, and his son Yair, and that they have influenced several of his decisions, including some that put the nation's security at risk. In one such instance, Netanyahu apparently acted counter to the advice of the Israel Defense Forces, Mossad and Shin Bet.

It is thought that this relates to the crisis that erupted with Jordan and the Palestinians over installing metal detectors on the Temple Mount following an attack in which Israeli Arabs killed three Border Patrol officers at the entrance to the holy site last July. Netanyahu tried a tough approach, ignoring the professionals' recommendations. In the end, he was forced to climb down and succumb to the demands of the Jordanians and Palestinians. Furthermore, Netanyahu received in his office the Israeli security guard who shot and killed two Jordanians in Amman that same month. He also spoke with the Israeli ambassador to Amman, Einat Schlein, by phone and posted images of the talk and even a transcript of the conversation on social media. This infuriated King Abdullah II and exacerbated the brewing crisis with Jordan. As a result, Jordan insisted that Israel replace its ambassador. Bilateral relations were downgraded for many months.

That Hefetz signed an agreement to serve as state's witness has increased the sense that the clock is running out on the Netanyahu era. Even senior state attorney officials think it for the first time, and legal commentators are reporting an “alignment” among law enforcement authorities over the issue. The only person who refuses to accept it is Netanyahu himself.

The prime minister is currently deliberating whether to call early elections for June. If elections are held, Netanyahu hopes to come out of them even more empowered. He could then wave the results in front of the attorney general as proof that he represents the will of the people, despite all the investigations, reports and even the state's witnesses.

Investigations legally are not supposed to be influenced by elections. On the other hand, Netanyahu knows that with all his recent efforts at incitement, the public mood will make it difficult for the attorney general to arrive at a decision. Meanwhile, Netanyahu continues to incite those closest to him with attacks on law enforcement and the rule of law.

Netanyahu is certainly not afraid of conflict. He wants a confrontation and is constantly increasing the flame. The resulting impression is that he plans to fight until the bitter end. He will burn down the clubhouse and everyone in it if he deems it necessary. That's because Netanyahu knows that he is no longer fighting for his job, but for his freedom.