With all that is going on with Netanyahu, recent revelations in Case 4000 might turn it into the Israeli prime minister’s No. 1 problem. 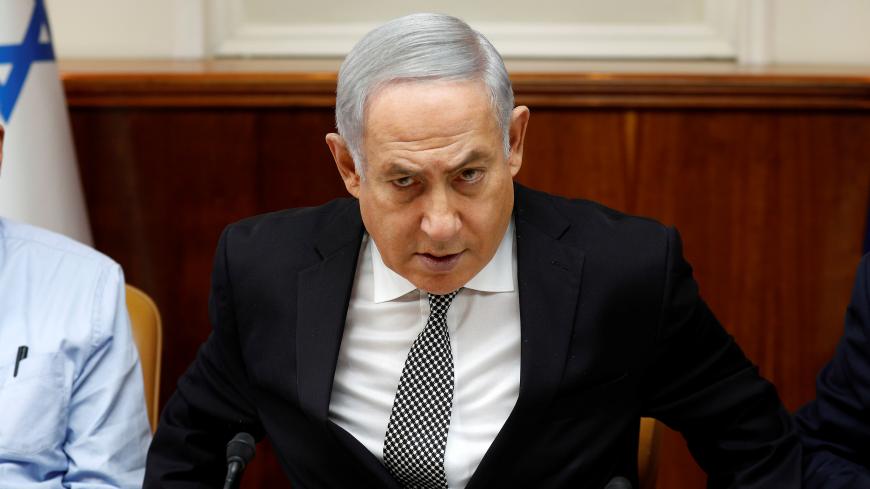 Two senior Cabinet ministers, Yisrael Katz of the Likud and Aryeh Deri of Shas, didn't notice that the Knesset Channel’s cameras were focused on them as they joked around in hushed tones Feb. 26 during a Shas event in the legislature. The two were speaking about the recent revelations that the judge handling Case 4000 involving Prime Minister Benjamin "Bibi" Netanyahu had exchanged text messages with a state attorney to coordinate an extension of the custody of suspects in the affair. These disclosures were to Netanyahu's advantage, and Katz and Deri's conversation, recorded in full by the camera’s microphone, reflected what many people in the Israeli political system have been saying:

“It’s something else,” Deri continued.

The conversation took place on the day that the political and legal drama surrounding Netanyahu made an Olympics-worthy acrobatic turn that stood to make it look as if the prime minister were being persecuted, rather than being investigated in an even-handed way. When the dust settled, however, normalcy had returned, and Netanyahu’s legal situation seemingly looked more ominous than ever. Before that happened, however, the legal system and law enforcement suffered a devastating blow, seriously harming their public reputations. Any efforts at restoring the lost trust will be long and arduous.

It all happened as a result of a Feb. 25 Channel 10 report that featured a picture of the cellphone screen of an Israel Securities Authority investigator involved in Case 4000. Netanyahu is scheduled to be interrogated March 2 for bribery in that case. The scandal, which Al-Monitor has covered, revolves around alleged bribery involving Shaul Elovitch, former majority stakeholder of the telecommunications giant Bezeq. Netanyahu is thought to have granted Bezeq regulatory benefits valued at hundreds of millions of shekels, paid from the pockets of Israeli taxpayers. In exchange, Elovitch is alleged to have rewarded Netanyahu by ensuring that the popular news site Walla would cover the Netanyahu family favorably.

The screenshot broadcast on television showed correspondence between the securities investigator on the case and the judge slated to oversee it. The image indicated that the two of them had colluded by coordinating an extension of the two main suspects’ detention in advance of their hearing. The suspects were Elovitch and Nir Hefetz, who serves as the Netanyahu family’s media consultant and spokesman.

It did not take long before a conspiracy theory began making the rounds, claiming that the police, the attorney general’s office, the courts and the Israel Securities Authority were all working together to bring down Netanyahu, incriminate the people closest to him and thus engineer a political coup. The text messages left little room for doubt or the imagination. They exposed collusion between the judge and the investigator before the case was even brought before the court and regardless of any evidence that would be presented.

The public response was dramatic, with almost everyone, left and right, expressing shock and disgust. Judge Ronit Poznanski-Katz was immediately removed from the case, and some of the suspects were released immediately. At the time, it looked like Case 4000 would get the kind of black eye from which it would be hard to recover, but it was precisely then that the Katz-Deri conversation was recorded and began making the rounds. This bit of footage was especially sensitive, as Katz's name pops up repeatedly as a potential Netanyahu successor, and because Deri is entangled in a criminal investigation of his own.

By the next day, the system had recovered and returned to normal. The ombudsman of the judiciary determined that the judge’s actions were not tainted with criminal behavior. While the full exchange of messages showed unacceptable and disreputable communications between the judge and the investigator, it became moot. The new judge appointed to replace Poznanski-Katz extended the arrest of Elovitch and Hefetz anyway. Things began to calm down, and the parties continued to prepare for “Big Friday,” when Netanyahu was expected to be interrogated under warning in Case 4000 and perhaps also give testimony in Case 3000, the submarine scandal.

Netanyahu’s questioning in the latter case is being described by the police as “open testimony,” although people close to the investigation say that it could also become an interrogation under warning. If Netanyahu becomes a suspect in Case 3000 as well, it would be a breaking point of sorts, that is, the kind of watershed moment that marks the beginning of the end. If not, the prime minister could continue fighting to hold on to his position, and his freedom, for the next few months.

Case 4000 seems to be the most important case being brought against Netanyahu for now, even though the police have already recommended that he be indicted for bribery in Cases 1000 (for allegedly receiving gifts from businessmen) and Case 2000 (for allegedly plotting with Yedioth Ahronoth's publisher to receive positive coverage). Case 4000 involves tangible evidence and an important state witness, Shlomo Filber, a Netanyahu confidant who also served as his director general of the Ministry of Communications. Then there are all the documents, correspondence and recordings that link Netanyahu directly to the benefits that Bezeq received from the state as well as to the enormous benefits and favorable coverage the Netanyahu family received from Walla. Investigators are now looking for additional benefits and maybe even money believed to have been transferred from one party to the other. If such cash payments are found, Netanyahu’s situation will be much worse than it is now. So far, Netanyahu has been able to convince his supporters that while he may be quite the hedonist, he is not corrupt. It would be a resounding blow if it is discovered that huge amounts of money were also involved.

At the time of writing, Netanyahu was trying to postpone the March 2 interrogation. The police are insisting that it take place as scheduled, but Netanyahu is supposed to travel to the United States after being questioned to participate in the annual AIPAC conference March 4 and to meet with President Donald Trump. He is trying to maintain the impression that everything is business as usual while using the US administration to prove to Israelis that he is irreplaceable. Meanwhile, the police are trying to complete their interrogation.

It is now up to Attorney General Avichai Mandelblit to set the pace and make decisions. He, too, is a former Netanyahu confidant and once served as Cabinet secretary. To further complicate matters, Mandelblit himself has recently come under intense scrutiny after it was discovered that Hefetz, the Netanyahu family adviser, had tapped him for attorney general. Mandelblit must thus navigate through the perfect storm facing Israel this year. It is a storm with no end in sight.