For Likud supporters, the affair of state witness Nir Hefetz only proves once again that Prime Minister Benjamin Netanyahu is being persecuted by the police. 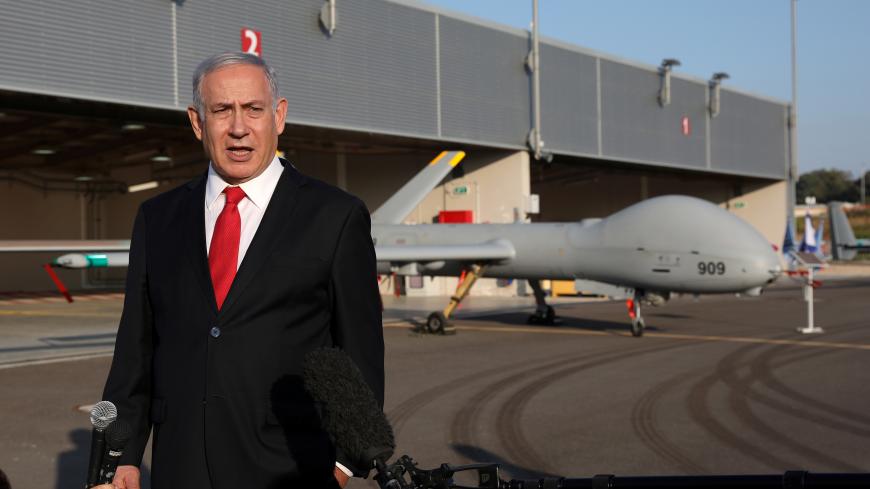 Israeli Prime Minister Benjamin Netanyahu delivers a statement to the media after reviewing an exhibition by the Israeli air force at the Palmachim air force base near the city of Rishon LeZion, Israel, Oct. 27, 2019. - Abir Sultan/Pool via REUTERS

When Justice Minister Amir Ohana ascended to the Knesset dais Nov. 6 with a sheet of paper in hand, no one present attributed any importance to what seemed like a routine event. As they quickly learned, he would be dropping a bombshell. Much to everybody’s shock, the justice minister took advantage of his parliamentary immunity to give a detailed account of the unusual methods used by police interrogators against Nir Hefetz, a state witness in the case against Prime Minister Benjamin Netanyahu. A court had placed a gag order on the information, yet Ohana was sharing it from the Knesset dais on live TV. In so doing, despite the gag order, he was revealing intimate details about Nir Hefetz’s personal life and the life of someone close to him.

Ohana did this just a few weeks before Attorney General Avichai Mandelblit announced his decision in the various criminal cases involving Netanyahu. It was his attempt to prove what he and the prime minister have long believed: Netanyahu will not receive a fair trial, because Israel’s law enforcement agencies are waging a malicious campaign against him.

Ohana’s toxic attack on the police and the state attorney’s office had an immediate political effect. It hacked away at any chances, slim as they were, to form a unity government. As one senior member of the Blue and White party told Al-Monitor on condition of anonymity, “It is true that a large part of the Blue and White base doesn’t want another round of elections, but they don’t want Netanyahu even more. That is why, when something like that happens, there is even less of a chance that [Blue and White leader Benny] Gantz will confer his seal of approval on Netanyahu.”

In fact, it wasn’t long before Gantz tweeted: “The troubling behavior of the Justice Minister is only further proof that the Prime Minister must not be allowed to serve while he is under indictment.” While this tweet reflected his values, it was also a political tweet directed at his electoral base. They had voted for Blue and White in two elections, one right after the other (April and September), in the hope that the party would finally bring an end to the Netanyahu government. These are voters who see Ohana and walk away convinced that the country is being run by the mob. They consider the justice minister himself to be nothing more than a consigliere, working on behalf of the prime minister, by violating the gag order. He may even have received his instructions from the prime minister himself, or possibly from Netanyahu’s son Yair.

This particular detail is irrelevant. Ohana doesn’t need explicit instructions. He believes wholeheartedly that Netanyahu is being harassed by a malicious system. He is not part of the rabble either, nor is he lacking a spine. He is a trained jurist, aligned with the right, and an ideologue who believes that something is rotten about the current state of the rule of law. He is not the only one to feel that way. Also, his obsequious behavior toward Netanyahu overlaps with his beliefs.

Ohana is intimately familiar with the feelings of animosity that the right in general and the Likud in particular have toward the various law enforcement agencies. It is nothing new. It existed even before Netanyahu was ever investigated. What is new about the current situation is that the best paladin and publicist in the Israeli political system — Netanyahu — is leading an all-out campaign against those law enforcement agencies. It is a very sophisticated campaign that has extended his personal sense of “victimhood” to encompass the same feeling of persecution felt by the Likud and the entire right. That’s not all. Netanyahu has also managed to translate declining public confidence in the rule of law into a powerful political sentiment. Much to their shame, those very institutions provide him with material for his campaign on a daily basis. It began with the prosecutor overseeing his cases — Liat Ben Ari — taking a leave of absence (she was on family vacation) during half of his hearing, continued with the search of his advisers’ cell phones without a warrant (Jonathan Urich and Ofer Golan), and culminated with the use of unusual and often malicious methods to interrogate state witness Nir Hefetz, which eventually led to him cracking under pressure — at least according to Netanyahu.

When supporters of Netanyahu see these events unfold, they become even more entrenched in their position that Netanyahu is being victimized. It would be a big mistake to dismiss this with the spurious claim that this involved just a handful of the most fervent Netanyahu supporters. If that was really the case, Netanyahu would have collapsed and disappeared from politics a long time ago. In fact, he continues to have a strong showing in the polls, his position in the Likud is stable, and he is safely positioned as the leader of the right-wing ultra-Orthodox bloc, with its 55 seats. After all, the leaders of that bloc can fully identify with his feelings of victimhood.

On Nov. 7, the new chairman of the Likud Knesset faction, Miki Zohar, gave an interview to Army Radio. It reflected the predominant mood among mainstream Likud activists. He backed what Ohana did, saying, “Today, the Likud is in the kind of situation that leaves us wanting to scream, just to scream, the truth and to tell people, ‘Wake up! Look at what is going on here!’ We are witnessing a situation in which the state prosecutor’s office, together with the police, is involved in covering up a blatant lie, hostile testimony, dirty testimony, using the means at their disposal by law, and we are stuck in a situation where we cannot say the truth, where we cannot explain what really happened with Nir Hefetz’s testimony and how it was obtained.”

Former Minister Gideon Saar is considered to be Netanyahu’s biggest rival in the Likud and the leading candidate to take over from him one day. Yet even he shares the same sentiment. Saar is a jurist who once served as an aide to former Attorney General Michael Ben Yair. As a member of the Knesset, Saar is highly regarded as a disciplined legislator. A few years ago, he submitted legislation to defend the rights of people under interrogation and ensure they receive a fair process. The law he proposed even granted judges the right to reject evidence obtained through illegitimate means. This Wednesday, Saar resubmitted his proposed legislation, which failed to pass the last time. It was obvious to everyone that he was doing it with the case of Nir Hefetz as context. To Saar’s credit, it should also be said that he didn’t just now see the light. This has been part of his agenda long before any charges were brought against Netanyahu. By resubmitting his legislation, he is actually boosting Netanyahu’s claims against the way Hefetz was recruited as a state witness. As such, doing this certainly won’t hurt him in the Likud. In fact, it is further proof that Saar will not lead a revolt against Netanyahu, even if the attorney general does charge him with bribery. Saar wants to become prime minister one day, but he wants to do it from within the Likud. He is not aiming for political suicide.

As the days pass and attacks on the police and the state prosecutor’s office by the prime minister and his supporters intensify and become more aggressive, the chance of forming a unity government becomes more and more unlikely. As long as the Blue and White party’s base is decidedly anti-Netanyahu and regards the prime minister as a toxic and destructive force, the option becomes ever more remote. This attitude is a mirror image of the current sentiment in the opposing camp on the right, which is no less intense.