Has the individual intifada peaked?

Collaboration between Israeli and Palestinian security forces has reduced the scale of the individual intifada. 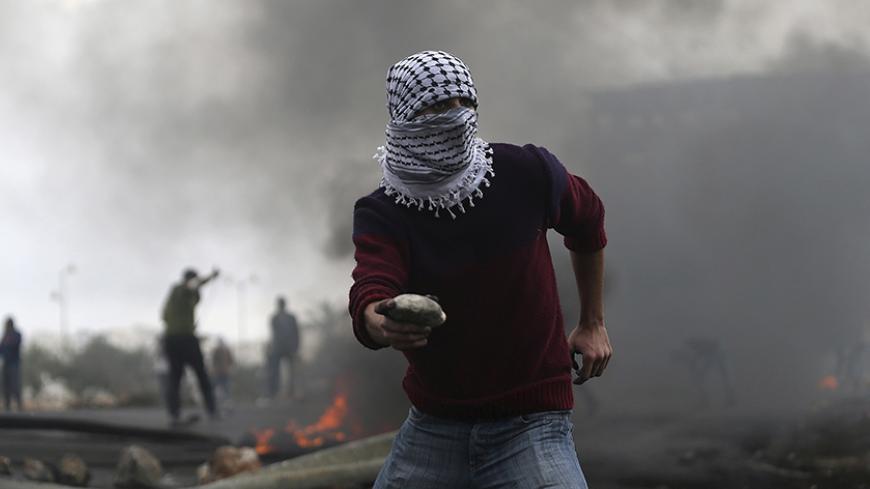 A masked Palestinian protester prepares to hurl stones toward Israeli troops during clashes near the Jewish settlement of Bet El, near the West Bank city of Ramallah, Oct. 26, 2015. - REUTERS/Mohamad Torokman

Israel has been torn in half for the past 10 days over the soldier who took the law into his own hands and shot and killed a wounded Palestinian March 24 in Hebron after the latter had already been neutralized. The country is divided into two warring factions furiously arguing. The vast majority of the public, along with a group of agitated right-wing politicians, have been verbally attacking Defense Minister Moshe Ya’alon, Israel Defense Forces (IDF) Chief of Staff Gadi Eizenkot and the entire IDF senior command. The military establishment has determined that the soldier’s actions were in breach of IDF values and has opened a criminal investigation against him.

Amid this chaos, one encouraging development has almost been overlooked: The wave of Palestinian "individual attacks" that began in October 2015 is receding. According to Shin Bet data, the numbers speak for themselves: there were 609 attacks in October, 322 in November, 239 in December, 166 in January, 153 in February and about 115 in March. The attacks in March were less than a fifth of those in October. This is not a widespread uprising of large swathes of the Palestinian public but a local “eruption” of Palestinian Generation Y, an upheaval that has long since peaked.

Nevertheless, the IDF and Shin Bet are far from resting on their laurels. “The situation is dangerous,” said Israeli Defense Minister Moshe Ya’alon behind closed doors, according to senior security official who spoke to Al-Monitor on condition of anonymity. “A flare-up can take place at any given moment, although we are succeeding in containing events and finding a way to lower the level of violence to a minimum.”

To date, 32 Israelis, one foreign national, a Palestinian from Hebron and about 250 Palestinian attackers have been killed. The terror wave has involved about 100 stabbings, some 70 shooting incidents and about 20 vehicular attacks.

The peak of the wave has apparently passed. The event in Hebron involving the soldier was almost the only incident during the weekend it occurred. Incitement on social networks is also dying down, while incitement through the Palestinian Authority’s (PA) state-run media has almost disappeared. After inflaming the atmosphere in speeches last September and October, Palestinian President Mahmoud Abbas grasped that it was too risky to ride the tiger of terror, and as a result, changed direction.

The Palestinian security apparatus is working overtime to locate potential attackers and arrest them and attempting to calm the atmosphere. They have even conducted surprise searches in schools to collect knives from pupils.

“If we give up security coordination, there will be chaos,” Abbas said in an interview with Channel 2 on March 31. Abbas added that his security forces are preventing a deterioration of the situation and for the first time condemned the terror attacks.

The dramatic changes in Abbas’ position and conduct are only part of the reason for the decline in violence. Israel’s wise policy, under the leadership of Ya’alon and Eizenkot, has succeeded in keeping the overwhelming majority of the Palestinian public outside the circle of violence. The PA’s security apparatuses as well as Fatah, including its Tanzim militia, do not participate or deal in terror. Even the refugee camps, which are potential hubs of incitement, have remained outside the frame. In segmentation studies conducted by Israel, it was found that only 25 of the 250 Palestinian attackers hailed from refugee camps. Half of them were under 20 years of age, and slightly more than 10% were females.

Israeli security sources say that ultimately what is at work is protest by the young Palestinian Facebook generation. It is not fueled by unmistakably religious motives although in some instances, the fury derives in part from religious indoctrination connected to Al-Aqsa Mosque. This is the belated arrival of the spirit of the Arab Spring to the PA's domain. This spirit has mainly consumed frustrated, confused youths seeking to rebel against the establishment and the sad scenario that awaits them in life. Often, the assailants were influenced by the deaths of friends or by discussions on social media of attackers who were shot or “executed” by Israel.

“The phenomenon we are witnessing is almost ‘romantic’ in nature although of course it is difficult to use a word like that [in this context],” said a highly placed Israeli military source. “In some of the cases, these youths believed that perpetrating a terror attack in Israel with a knife would end or change their lives and bump them up to a higher [status]. It became a tool for social mobility and an expression of fury and rebellion.”

Thus, Israeli policy succeeded in “dividing and conquering” the Palestinian public. Close to 200,000 Palestinian workers earn their living in Israel, and these workers feed more than a million people in the West Bank. Even during the most violent days of the individual intifada, Israeli policy, led by Defense Minister Moshe Ya’alon, advocated a soft approach.

“We rarely imposed closures and encirclements,” said Ya’alon in his closed-door statements. “After all, that’s the best way to get the masses out into the streets. We transfer the requisite tax money to the [Palestinian] Authority. After all, it’s Palestinian money. Security cooperation is good; neither of the two sides has any other choice.”

In the medium range, this policy has been quite successful. The overwhelming majority of Palestinian society stayed on the sidelines, away from violent incidents, and kept the peace.

“In recent weeks, we’ve started to solve the terrorist attacks even before they take place,” said an upper-echelon Israeli security figure speaking on condition of anonymity. “We developed methods.” He cited new algorithms developed by Israeli cyber and intelligence experts that facilitate the monitoring of social networks and locating posts that point to potential terror plans of participants. Increasing numbers of Palestinian youths, male and female, were stopped or apprehended on their way to perpetrate stabbing attacks. The numbers on the ground are harbingers of success.

All this, together with a significant deployment of forces on the ground — there are about 30 IDF battalions currently in the West Bank — and police forces flooding Jerusalem show signs of beginning to curb the terror wave. The question is, of course, “What now?”

In his Channel 2 interview, Abbas claimed to be willing to meet with Prime Minister Benjamin Netanyahu at any given moment. He said that he even tried to coordinate such a meeting to convince Netanyahu to give the order to the IDF to cease activities in Palestinian cities and give the PA an opportunity to reign in the terror by itself. Netanyahu’s side said the situation is the polar opposite — that Netanyahu is willing to meet with Abbas and enter into negotiations without preconditions at any given moment. If both are ready and willing to meet, one wonders why it isn't happening. ​