Despite the recent spate of attacks, Palestinian security officials argue that neither Fatah nor Hamas are interested in escalating the situation with Israel and emphasize that Israeli policies create continuous frustration among West Bank residents. 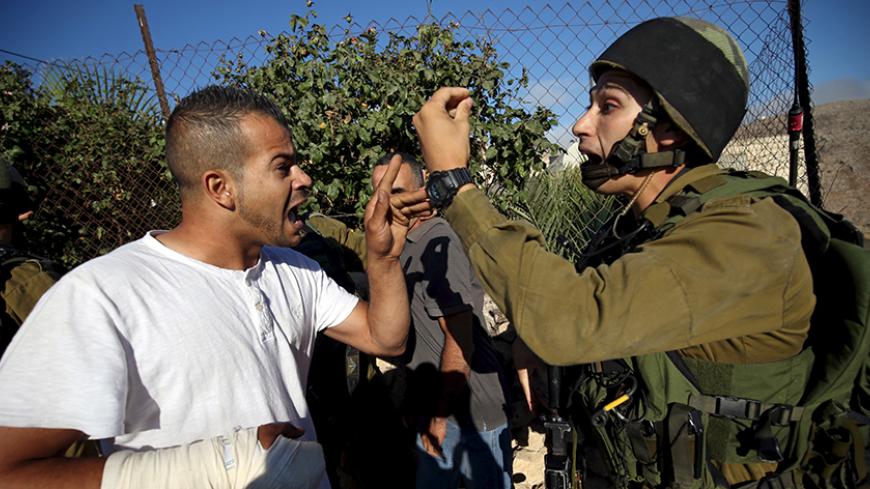 A Palestinian argues with an Israeli soldier during a confrontation in Qafr Malik near the West Bank city of Ramallah, June 14, 2015. - REUTERS/Mohamad Torokman

“We still think that the recent terror attacks in Israel are the actions of lone wolf attackers; they have no organizational infrastructure even though we are seeing a type of activity that is more complex than in the past,” Gen. Adnan Damiri told Al-Monitor in an interview. The Palestinian Authority (PA) security services spokesman's assessment, shared by other high-ranking PA officials, stands in stark contrast to some Israeli opinions that the recent wave of terror attacks may have organizational backing.

In the first 10 days of Ramadan, a number of terror attacks have occurred, including the June 19 murder of Danny Gonen near the Dolev settlement, the June 29 attack near the Shvut Rahel settlement that killed young Malachi Rosenfeld and other drive-by shootings. According to some views held in Israel, these attacks testify to a rather high operational level of planning and organization and are not necessarily the work of a lone wolf who carries out a random attack out of despair and frustration.

My colleague Ben Caspit quoted a senior Israel Defense Forces officer as noting the possibility of “a more well-trained local organization that operates systematically in the territory.” Nevertheless, Caspit also quotes sources in the security apparatus who say there is no "intifada energy" in the territories, but "public mood-dependent terror attacks.” According to Caspit’s security sources, it would seem that the condition of the West Bank residents is rather satisfactory, and that they have no reason or impetus to complain. “Look around you,” a high-level Israel security source told Caspit. “Tell me, who in the region has a Ramadan table as abundant and relaxed as those of the Palestinians in Judea and Samaria?”

Clearly, Israel’s optimistic assessment is that the wave of violence was partly "inspired" by the month of Ramadan and likely to pass with the Eid al-Fitr festivities concluding it in a bit more than two weeks. However, according to Palestinian security sources, this assessment shows that Israel is clearly divorced from the reality on the ground. The situation of most of the Palestinians in the West Bank territory, they claim, is more complicated and sensitive than the comparison to the skimpy and meager Ramadan tables of their Palestinian brethren in Lebanon, Syria and Jordan would suggest.

About a year and a half ago, peace talks with Israel fell apart. Recently, a new right-wing government was established in Israel, one that does not accept the two-state solution in principal. As a result, a lively public debate has been going on in the West Bank, especially among educated youths, surrounding the question of where the PA is headed in regard to Israel. The discourse is taking place in the Palestinian media, on social networks and in conventions and other public events in the territories. The focus is on what the Palestinians need to do now, while Israel’s direction and attitude to the two-state solution and peace process are crystal clear. Most of the Palestinians in the West Bank seem to be reaching the following conclusions: Israel does not really want peace, it plans to expand its presence in the West Bank territories and it only understands force.

This is the true atmosphere in Ramallah, Nablus, Hebron and Jenin, far from the idyllic picture that Israel tries to paint. But it is still far from the atmosphere that prevailed in the territories on the eve of the second intifada. In September 2000 under PLO leader Yasser Arafat’s leadership there was chaos in the territories, or "fauda" in Arabic, a prevalent word at the time in the PA. The activists used to boldly exhibit their weapons. The situation today is different. The Arab term '"kanun" (law) has replaced "fauda," suggesting public order in the authority.

Senior officials in the Palestinian security apparatus told Al-Monitor on condition of anonymity that there is no danger of a new intifada breaking out in the near future, but they have a completely different explanation for this from that of the Israelis. They claim that the intensive activity of the Palestinian security apparatus and the “commander spirit” (the statements and ideological platform of President Mahmoud Abbas) dictates one message to all PA officials: all armed organizations in the territories must be nipped in the bud. If not for this, they say, the current situation between Israelis and Palestinians in the West Bank territories would be completely different.

This is a more accurate assessment: The Palestinian security apparatus has been conducting a holding action to overcome the agitation and discontent in the PA over the absence of a diplomatic horizon, the enlargement of the settlements in the West Bank and the difficult economic situation.

“The Israeli story is that we carry out incitement, and it is those claims exactly that get people angry,” says Damiri. “What incitement are they talking about? That’s ridiculous. The ones engaged in incitement against us are the Israelis and the radical right-wing government that arose in Israel, which renounces any kind of arrangement and defends the actions of the settlers under all circumstances. You can take my word for what I say now: There is no organization interested in dealing with a violent reality and leading the way to chaos. Even Hamas now wants to calm things down with Israel, not another round of violence. We know that they are pursuing contacts with the Israelis and they have no interest, certainly not now, to rebuild their operational infrastructure [in the West Bank]. It is the violence perpetrated by settlers in the territories against Palestinians that brings counterviolence. There is no disagreement about this. How long can this situation last? Not long! Will the conduct and actions of Israel’s right-wing government lead to quiet? Ask yourselves, and you’ll arrive at the correct answer.”

Defense Minister Moshe "Bogie" Ya’alon placed the blame on Hamas’ headquarters in Turkey, headed by Salah al-Arouri, for the two drive-by shootings. Ya’alon claims that the funding for terror comes from Iran, which after a long hiatus has renewed its support for Hamas. Arouri was the guiding hand and financial underwriter of the murder of the three Israeli youths Naftali Frenkel, Gilad Shaer and Eyal Yifrah last summer in the Etzion settlement bloc. Their murder that dragged Hamas and Israel into a deadly round of fighting in Gaza.

If Arouri is involved this time as well, that means that he is again trying to obstruct the efforts of the Hamas diplomatic leadership to reach a long-term cease-fire arrangement with Israel — despite its protestations to the contrary.

Yet despite the mutual anger, resentment, distrust and contempt displayed by the two sides to each other, one positive element still stands out: The security coordination between Israel and the PA continues and is generally proving to be effective. Thus, it seems that Abbas’ spirit continues to triumph even during the month of Ramadan.