Escalation is expected in the West Bank and Gaza Strip, given several strong indicators that portend an imminent explosion. 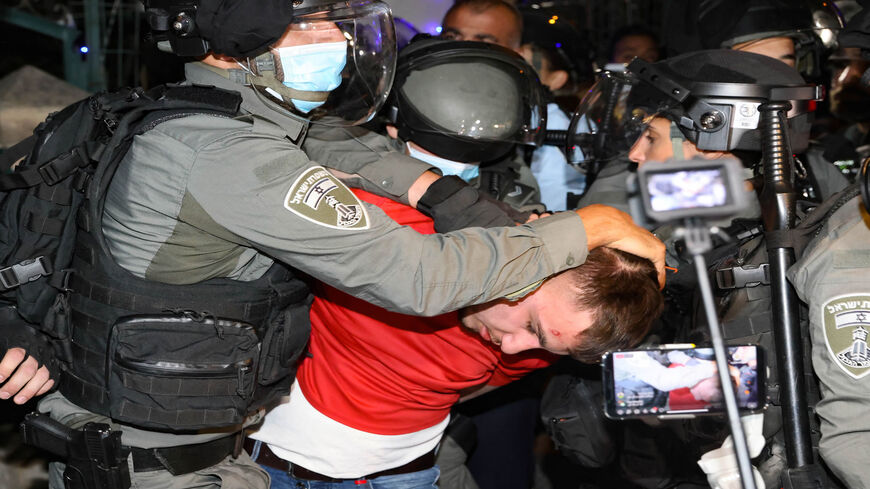 A Palestinian demonstrator is arrested by Israeli security forces, as Palestinian families face eviction, part of an ongoing effort by Jewish Israelis to take control of homes in the Sheikh Jarrah neighborhood of occupied East Jerusalem, May 5, 2021. - Ahmad Gharabli/AFP via Getty Images

RAMALLAH, West Bank — Palestinians’ eyes are set on the Sheikh Jarrah neighborhood in East Jerusalem, where 28 Jerusalemite families are facing the risk of eviction and forced displacement from their houses. Israeli settlement organizations claim to own the land where the houses were built.

On May 4, Palestinians in Sheikh Jarrah faced Israeli abuses and arrests for the third night in a row, while they wait for the appeal they submitted to the Supreme Court against the decision of the Jerusalem District Court to evacuate them.

The events prompted Mohammed Deif, commander of Hamas’ armed wing, Izz ad-Din al-Qassam Brigades, to release May 5 a brief statement after years of absence. He threatened Israel directly if the residents of the neighborhood are expelled or evacuated, saying, “This is our final warning. If the aggression against our people in the Sheikh Jarrah neighborhood does not stop immediately, we will not stand idly by and the occupation will pay a heavy price.”

Learn More: Listen to Hana Salah's interview with Andrew Parasiliti on the situation in Gaza here.

The West Bank has been witnessing escalation and military alert from the Israeli army since May 2. A drive-by shooting took place at the military Zaatara checkpoint in south Nablus, wounding three Israeli settlers, including a 19-year-old who was pronounced dead May 5. The Israeli army said the perpetrators, who fled the scene, were driving a car with a Palestinian license plate.

Since the incident, the Israeli army has deployed hundreds of soldiers to the West Bank and beefed up its raids and searches in the towns in Nablus governorate in search of the perpetrators, resulting in clashes between the Israeli army and Palestinian youth across villages, including Beita, Aqraba and Turmus Aya.

Hamas and the Islamic Jihad praised the Zaatara operation, which happened only a few hours after the Israeli army shot and killed a 60-year-old Palestinian woman, whom they accused of attempting a stabbing attack against a group of Israelis near Bethlehem, in the south of the West Bank.

The Zaatara operation was a slap in the face of the Israeli security apparatus for several reasons. The Zaatara checkpoint, which separates the north of the West Bank from its center and south, is one of the best-guarded Israeli military checkpoints. It is surrounded by military control towers and dozens of cameras, in addition to heavy presence of Israeli soldiers.

In the past weeks, the West Bank has come under Israeli escalation, notably in Jerusalem. Israel had erected barricades in the Damascus Gate area to prevent the movement of Palestinians in the area. Meanwhile, settlers were incited to raid the area and raise banners reading “Death to Arabs.” Jerusalemites resented these acts and stood their ground, insisting on protecting the area from violation and identity change. Daily clashes erupted and were dubbed the “Damascus Gate outburst.” Also, Israel refused to hold Palestinian elections in the city, which was behind President Mahmoud Abbas’ decision to postpone them.

Meanwhile, the resistance factions in the Gaza Strip responded to the violent events in Jerusalem. For several days, missiles were launched from Gaza toward the settlements on the Gaza envelope.

On April 25, the Israeli police finally removed the barricades it had erected in Jerusalem.

The situation in Haram al-Sharif compound, or what Israelis call the Temple Mount, and its surroundings is still tense, and an explosion is simmering, amid massive calls from settlers and settlement organizations to raid Temple Mount on the 28th day of Ramadan. Meanwhile, Palestinians are sending out calls to gather and hold a sit-in in Haram al-Sharif to defend it and ward off settlers.

On May 4, Palestinian resistance factions called on Palestinians in Gaza to head to Haram al-Sharif to pray and stay there especially on the 28th day of Ramadan, to face Israeli settlers. They asked the masses to flare up “revolution and uprising over Zionists’ heads” and said Israel will bear the repercussions.

In this vein, one cannot overlook Abbas’ decision April 29 to delay the elections that were scheduled for May 22 after Israel refused to hold them in Jerusalem. Israeli sources said that Hamas will most likely execute several operations to adversely affect the security situation.

Since the decision to delay the legislative elections, the West Bank has been the stage of massive protests against the decision. The protests were led by the electoral lists, which pledged to continue with their action until a new date for the elections is set.

Military analyst at Haaretz Amos Harel wrote May 2 that the timing of the Zaatara operation was “delicate,” amid expected escalation by the end of the holy Muslim month of Ramadan. He noted that the Israeli army is not surprised and expects more operations in the West Bank.

He noted that the Israeli speculations about the deterioration of the security situation increased when the Palestinian Authority (PA) canceled the elections. He added that Israel sought to cancel the Palestinian elections because it believed that Hamas would have won the elections at the expense of Fatah.

Shalhat said that Jerusalem will remain the main inciter of any potential escalation. According to him, Israel removed the barriers at the Damascus Gate a few days ago because of the popular action and because the Gaza Strip entered the confrontation. In addition, he noted, the Israeli military institution is convinced that this outburst might expand into a wider uprising.

According to Israeli media, the PA is expanding efforts to prevent any security deterioration. Channel 12 reported that the Palestinian security apparatus notified the Israeli army about the location of the car that was used in the Zaatara operation. Meanwhile, the Hebrew newspaper Israel Hayom cited a Palestinian official on condition of anonymity as saying, “The Palestinian security apparatus has delivered messages to its Israeli counterpart that the PA will not allow terrorist acts in the West Bank.”