Israel is implementing a policy of besieging the West Bank cities and towns, as resistance operations are increasing and expanding across the West Bank. 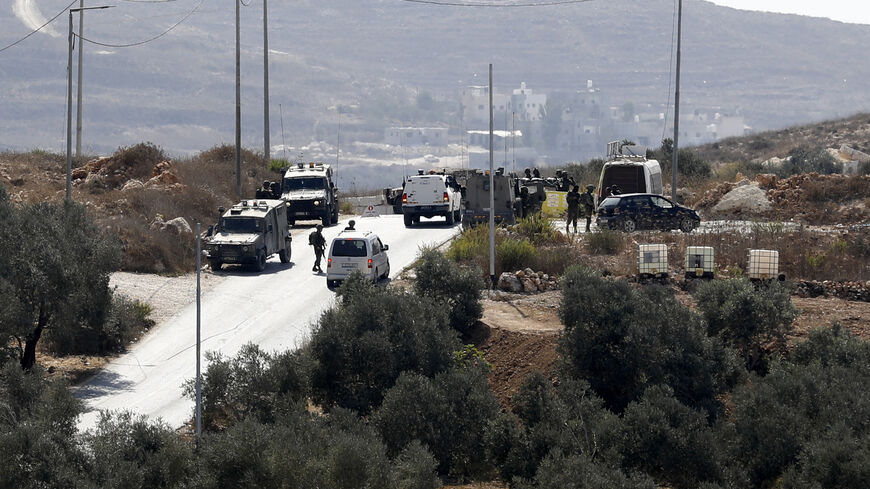 Israeli soldiers search an area for Palestinian assailants who fled after they carried out an attack on an Israeli checkpoint with an explosive device and gunfire, in the village of Till, near Nablus, West Bank, Oct. 16, 2022. - Zain Jaafar/AFP via Getty Images

RAMALLAH, WEST BANK - Violence between Palestinians and Israeli forces has erupted in recent days in east Jerusalem after the Israeli army imposed a dayslong siege on the Shuafat refugee camp in east Jerusalem, following the killing of a female soldier in a shooting attack Oct. 9 at the checkpoint set up at the entrance of the camp.

Around 140,000 people residing in the camp and others living in the neighboring as-Salam and Anata suburbs announced a state of civil disobedience in response to the siege.

During the dayslong blockade, the Shuafat camp, east Jerusalem as well as several cities and towns in the West Bank witnessed a general strike, while violent clashes were ongoing in the neighborhoods of east Jerusalem and Israeli Police vehicles were burned.

The Israeli media described the developments in east Jerusalem as the most serious since May 2021, when violence broke out in anticipation of an Israeli decision to evict Palestinian families from the city's Sheikh Jarrah neighborhood. Some outlets even reported that the Israeli forces lost control over the city.

On Oct. 11, the Israeli army imposed another siege on the city of Nablus in the northern West Bank, in response to the killing of an Israeli soldier near the West Bank settlement of Shavei Shomron, close to Nablus, and the continued shootings at Israeli soldiers and settlers. The army set up military checkpoints and closed all roads leading to most of the city’s entrances with earth mounds.

The policy of besieging Palestinian villages, towns and cities is part of the collective sanctions that Israel uses against Palestinians. The Israeli army had resorted to this policy during the 2000 intifada, separating the Palestinian communities from each other with military checkpoints, earth mounds and concrete blocks.

The situation in the West Bank has been escalating in recent weeks, prompting Israel to send heavy reinforcements. Four border guard battalions were sent to the West Bank and Jerusalem, and a total siege was imposed on the entire West Bank from Oct. 16 until Oct. 18, coinciding with the end of the Jewish Sukkot holiday.

The Palestinian resistance operations are no longer limited to the northern West Bank, as they expanded to the center and southern West Bank, which Israel had long feared. The number of Israeli soldiers and settlers killed from early 2022 until mid-October amounted to 26, according to Al-Monitor’s documentation, compared with 17 in the last year.

Gadi Eisenkot, former chief of the general staff of the Israeli army, told Channel 12 Oct. 15 that the current deterioration of the security situation in the West Bank is the most dangerous since the end of Al-Aqsa intifada, aka the second intifada, in 2005 and is even more dangerous than the 2015 Jerusalem intifada, as the Palestinian operations have escalated into shooting attacks, instead of knives and ramming attacks.

Israel fears that the tension and clashes will spill over to the Green Line. The Haaretz newspaper reported Oct. 13 that the difficulties facing Israel are increasing in light of the escalating Palestinian confrontations that extended from the West Bank to east Jerusalem. The paper said these operations are likely to reach other locations, including the territories occupied in 1948 (Israel).

Antoine Shalhat, director of the Israeli Scene Unit at the Palestinian Forum for Israeli Studies (MADAR), told Al-Monitor that Israel is using a policy of siege on the West Bank, particularly in the north, following the recent resistance operations.

He said that Israel is in great predicament, and does not know how to confront the current wave of operations.

Shalhat added that there is a state of confusion among the Israeli security establishments about ways to deal with the situation in the West Bank, and the army is thus resorting to besieging cities and villages in light of its failure to end the state of resistance.