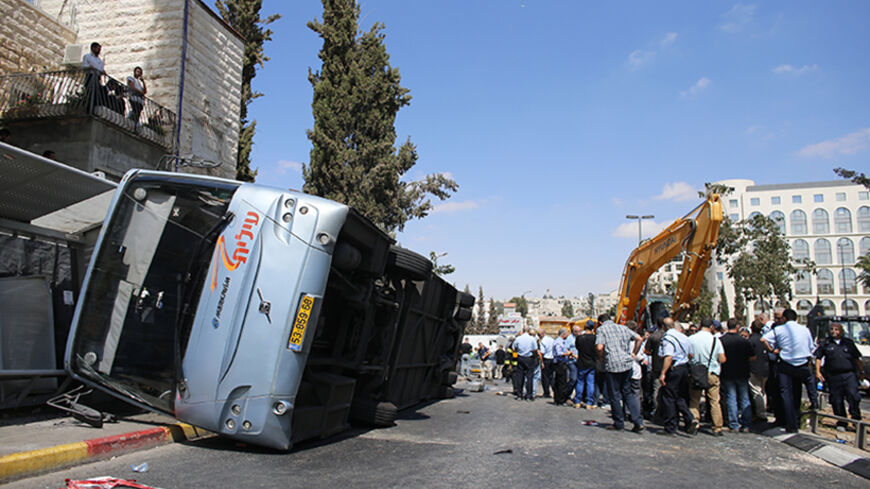 An overturned bus lies at the scene of a suspected attack in Jerusalem, Aug. 4, 2014. - REUTERS/Ammar Awad

In the course of the first week of Operation Protective Edge, I conversed with the editor-in-chief of a Palestinian radio station in Ramallah. I asked him how the West Bank residents view the armed conflict with Hamas in the Gaza Strip. “People here are laughing at you,” he told me. “If that is Israel, then we ourselves can liberate Jaffa, Acre and Haifa.”

My Palestinian colleague from Ramallah expressed his admiration at the power that Hamas has assembled, and which surprised the West Bank residents. But he also mainly expressed what he viewed as Israel’s feeble and indecisive response. (Israel agreed to a cease-fire after a volley of rockets was launched against Tel Aviv and even farther north on July 15.) Two days later, on July 17, after Hamas’ attack on the Gaza-Israel border from a terror tunnel, the Israel Defense Forces (IDF) initiated the ground offensive stage of the operation. At that point, the admiration in the West Bank turned into great worry, not only in light of the happenings in Gaza but also due to the fear that the violence could boil over into the place where everything began. After all, the military operation began in Gaza after the murder of the three high school youths in the West Bank Etzion settlement.

When Operation Protective Edge seemed to be winding down, the Israelis received a painful reminder that the West Bank is not treading water. On Aug. 4, two terror attacks were carried out in Jerusalem: a tractor terrorist attack in which Rabbi Avraham Walles was trampled and killed, and a drive-by shooting attack in the Mount Scopus tunnel that left an IDF soldier in serious condition. Each of the assaults was carried out by a lone attacker who was not operationally connected to any terror organization or cell. Each decided on his own to conduct a private jihad, whether out of momentary insanity or after advance planning.

According to the 2013 Annual Summary of the Shin Bet, six Israelis were killed and 44 were wounded in terror attacks in 2013, some of which were carried out by lone terrorists. The trend of lone terrorist attacks continued in 2014 as well, at the height of which police Chief Superintendent Baruch Mizrahi was murdered at the Tarkumiya junction near Hebron on the eve of Passover by Ziad Awad, one of the terrorists released in the Gilad Shalit prisoner exchange deal.

Will the cease-fire signed by the Palestinian organizations in Cairo also affect the West Bank? Did Israel’s harsh response in the Gaza Strip during the four weeks of the military operation —causing more than 1,800 deaths, tens of thousands of wounded and tremendous destruction — serve to deflect the West Bank from a third intifada? Israel’s defense system had warned of an imminent intifada before the beginning of the operation in Gaza.

The frustration and distress experienced by West Bank residents has not disappeared following Operation Protective Edge; on the contrary, it has deepened. The sense of there being ''no way out'' and hopelessness are joined by a dimension of confusion and by the feeling that the Palestinian leadership has lost its way, leading them on a path to nowhere. The Hamas route leads to an armed struggle with Israel, a struggle accompanied by a tragic price tag that is clear to everyone. This is in contrast to the nonviolent approach of Palestinian President Mahmoud Abbas, an approach that has not advanced the West Bank residents one iota in the diplomatic sphere. This debate regarding the preferable route for achieving a breakthrough is splitting West Bank residents in half and causing the tension between them to grow alarmingly.

One approach — that there is no other way but to fight Israel with violence because “Israel only understands force” — was consolidated at the beginning of the operation. The second approach is that Hamas’ violence brought disaster down on the Gaza Strip, and that West Bank residents who see the images should understand what could happen to them and their cities if they choose the Hamas route.

Thus, this debate divides the West Bank residents. This can be compared to the tension that exists in Israel between the left and right regarding the preferable approach to resolving the conflict with the Palestinians: Will the two-state solution lower the level of violence between the nations and avert the next armed conflict? Or will territorial concessions and a diplomatic agreement only bring the dangers even closer to Israel’s borders?

The conflicting approaches in Israel and in the Palestinian Authority (PA) have been tearing the two societies to pieces for years, but Operation Protective Edge has sharpened the controversy and intensified the pressure: in Israel, between the left and right, and in the West Bank, between Hamas supporters and their opponents.

In Israel, however, the old controversy will continue to accompany society in the near future when no political process is on the horizon. In the PA, by contrast, there is a sense of urgency, of a state of emergency. The military operation in Gaza served to push aside the substantive problems faced by the PA, problems it still faces today. Its financial crisis has not disappeared and the hardship, desperation and frustration have only deepened. To this we add another important issue: that various players in the field, mainly Hamas, will now redouble their efforts to fan the flames in the West Bank, in light of the fact that Hamas concluded the battle in Gaza without significant achievements. Hamas, which appeared much weakened before the operation, will try — at least publicly — to show that it is still alive and kicking, and that it emerged strengthened from its difficult battle with Israel.

On July 31, Hamas spokesman Fauzi Barhum called on the West Bank residents to fight the “Zionists” any way possible. “Anyone who has a motorcycle, car or bulldozer … must run over a Jew and kill a Zionist,” said Barhum. He added, “Anyone who does not kill a Zionist does not belong to Palestine.”

It is up to Abbas' Palestinian defense forces to forestall the influence of Hamas over the West Bank. But responsibility for meeting this challenge also falls on Israel.

A third intifada of any scope cannot erupt without the encouragement, support and financing of Palestinian organizations, mainly of Hamas. Hamas’ incentive to stir up and unite the West Bank forces with those of Gaza is transparent and well known. On the other hand, the Palestinian defense forces in the West Bank face the dilemma of how to stop Hamas members without looking like Israeli collaborators to the Palestinian population. Hamas, having lost many of its people in the course of the operation in Gaza, is viewed as a victim even in the eyes of those in the West Bank, who are convinced that Hamas’ violent path has wrought disaster in Gaza.

Thus, Israel must act to prevent lone terror attacks in the West Bank from multiplying. How can this be accomplished when we presume that a return to diplomacy is not a logical or realistic option? The only way is to provide significant financial aid to the PA. Israel is still imposing sanctions on Abbas because of the unity government he founded with Hamas. It is not clear how long this government will hang on, but Israel now has a great interest for Abbas to remain in the picture.

The lone terror attacks in Jerusalem are a sign of frustration, but do not yet indicate a clear-cut trend. The harsh sights of Gaza at the end of the operation convinced many in the West Bank — including those who accused Israel of indecisiveness — that a military conflict with Israel will not bring about a solution, but only more destruction and suffering. Therefore, Israel and the PA must work together, not only to fight Hamas but also to dispel tension.

Deterrence is important, but not sufficient. The PA's economic recovery is a common interest. And for this interest, it is worth setting aside all the feelings of hatred between the leaders.