To destroy Hamas, Israel should support opposition in Gaza

Some in Gaza would like to initiate a popular revolt, as happened in neighboring Egypt, but they can't make it happen without outside support. 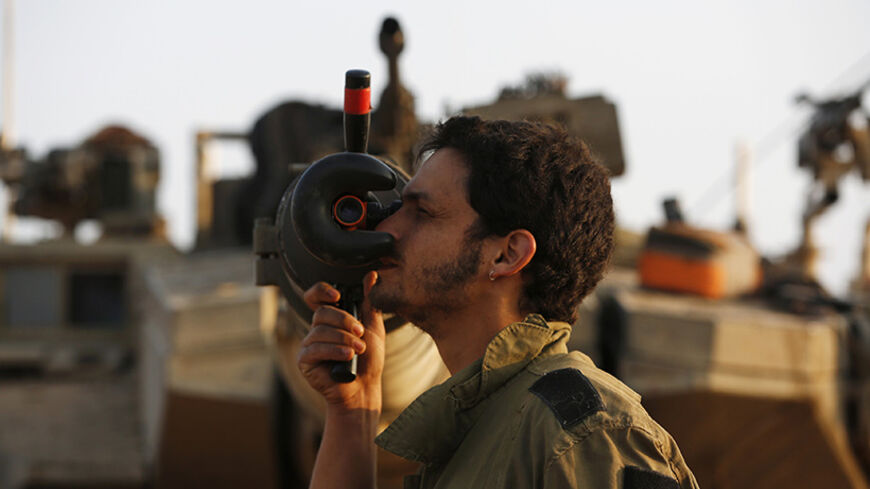 An Israeli soldier adjusts sights on a tank at a staging area outside the northern Gaza Strip, July 29, 2014. - REUTERS/Baz Ratner

The humanitarian cease-fires between Israel and Hamas have provided some respite and allowed the battle fog above Gaza to dissipate a bit. It enabled both sides to assess their damages and map their achievements, but mainly to search for “honorable” exit points. Hamas and Israel resemble two spent, bruised boxers who have exhausted themselves in the ring and wait for the final bell.

Meanwhile, each side inflicts one more blow, throws one more punch to the face. Yet both sides understand that no knock-out will be declared, at least not in the current round.

Hamas spokesmen, mainly Sami Abu Zuhri, continue to boast that the “resistance” can fight indefinitely. But the movement’s leaders in Gaza and Qatar already know that they will not succeed in opening the border crossings and removing the strangling blockade on Gaza. None of them really believes that a Gaza seaport will be constructed in the near future or that the airport in Dhaniya, which was bombed in the second intifada, will be rebuilt and reopened. Even when Operation Protective Edge ends, Gaza will remain chiefly closed on its northern and southern sides and inaccessible by air and sea. On the day after the war, the Gaza Strip's residents will feel no large change in their lives.

When a final cease-fire is declared, Hamas will reveal that even if its performance in the battlefield opens the purse strings of the emir of Qatar, even if it gets a second chance at an alliance with Iran and Hezbollah, neither will halt the movement’s rapid economic collapse. On the contrary, it will deteriorate even more. The Gaza Strip leaders who emerge from the bunkers in which they holed up for weeks will find great destruction visited on Gaza. They will also discover that not all the residents of the Strip will be convinced by the victory march that the movement will try to perform for a third time. They have witnessed similar tragic spectacles, detached from reality, in the past.

After the Cast Lead operation that lasted 21 days and ended in January 2009, key Hamas leaders and activists visited the refugee camps and destroyed areas, stood on the demolished houses and distributed candies to the residents. Abu Zuhri and Mushir al Masri donned white shirts and gave out sweets on the occasion of what they called the “firm steadfastness of the brave resistance.” The fact that 1,300 human beings were killed in the operation and that many lost their homes to the shelling of the Israeli army did not change a thing. The order was to rejoice over the victory and ignore the losses. Only a handful of people refused to welcome this symbolic “tray of celebration.”

To date, more than a thousand people have been slain in the current round of warfare; according to the Palestinian Health Ministry, half are civilians. Since Hamas rose to power in the Gaza Strip, about 3,000 Palestinians have been killed and tens of thousands wounded. There is no family in Gaza that has not lost at least one of its sons or daughters in the series of wars visited on them in increments of about two years. Hamas’ third war led to tremendous destruction and ruination, the likes of which Gaza had never known. In conversations I have had with Gaza residents, they say that Operation 'Cast Lead, which they had previously called “The Great War,” pales in comparison to the current conflict.

All Gaza residents, whether supporters or opponents of Hamas, view Israel as a cruel enemy that will go to any length in its attacks. They accuse Israel of focusing its sights specifically on civilians. Part of the population views Hamas and its Izz ad-Din al-Qassam Brigades commanders as defenders of the nation, fighters of Israeli brutality.

But the residents do not absolve Hamas of responsibility for the situation. Out of the wreckage, amid the fear and mourning for the many who fell, one can hear — for the first time — the anger of Gaza Strip residents against Hamas for leading Gaza to ruin. There are youths in the Gaza Strip who were never hard-core Hamas supporters, even though they studied in the Islamic University, a stronghold of the movement. These youths are already making plans to initiate a popular revolution that will attract hundreds of thousands, as happened in neighboring Egypt.

“If we bring 3,000 or 5,000 or 10,000 to demonstrate, they won’t dare kill us all,” the son of a longtime friend in Gaza told me. He had joined a group of students who believe that Palestine Square in Gaza can be a focal point of activity, almost like Cairo’s Tahrir Square.

But they also understand that at this stage, when Hamas activists are convinced that they are “kings of the world,” in their own words, no popular uprising will succeed. Anyone who dares utter a word of criticism, especially now, against the people of the resistance will be viewed as a traitor and he will end up dead.

Because of the reign of fear in the wake of the war, and because Hamas had never cut much slack for its opponents, the voice of the “popular revolution” will not be heard. However, many of the Gazans I spoke to argue that the Hamas opposition is growing steadily and will grow even more after the true dimensions of destruction, grief and sorrow from this latest fighting emerge in the Gaza Strip.

On the day after the war, Hamas will not be certain that the residents of the Strip will continue to cleave to them — residents who remain without a roof over their heads, without income, livelihoods or hope. The destruction is too great, the fatalities are too many and the attainments that Hamas will be able to show its citizens will be too meager. No amount of candy will be able to sweeten the bitter pill.

Therefore, the workers, the clerks, the small businessmen and the unemployed on the verge of starvation can constitute the first resistance against Hamas. The first agent to rehabilitate them will win their support.

In the cease-fire draft created by US Secretary of State John Kerry (and which Israel has so far rejected), Qatari money is promised to reconstruct the Strip. The money will flow through the Hamas movement’s pipelines, and this will signal the end of any possible resistance now and in the future. The Hamas hand which feeds is also the hand that destroys the Strip.

The United States has already announced it will donate $47 million in aid, and European countries have also promised contributions. Yet if the United States and the European countries insist that the money designated for the reconstruction of Gaza and treatment for Gaza’s victims will be funneled only through the Palestinian Authority, this could signal the first steps of President Mahmoud Abbas and his movement back to Gaza.

It will not be quick or easy. Great hatred for Abbas and Fatah still exists. But we cannot leave the overthrowing of Hamas to its opponents in the Strip. Yes, Hamas was hit hard in Operation Protective Edge — hard, but not hard enough.

The only route now is to assist the future rebels. They are weak, tired, exhausted and in hiding. But they exist, and they have hope. Yet their success will need outside support.