An initiative to grow rooftop gardens in overcrowded, crammed camps is providing some economic relief for Palestinian refugees, Dalia Hatuqa reports from the West Bank. 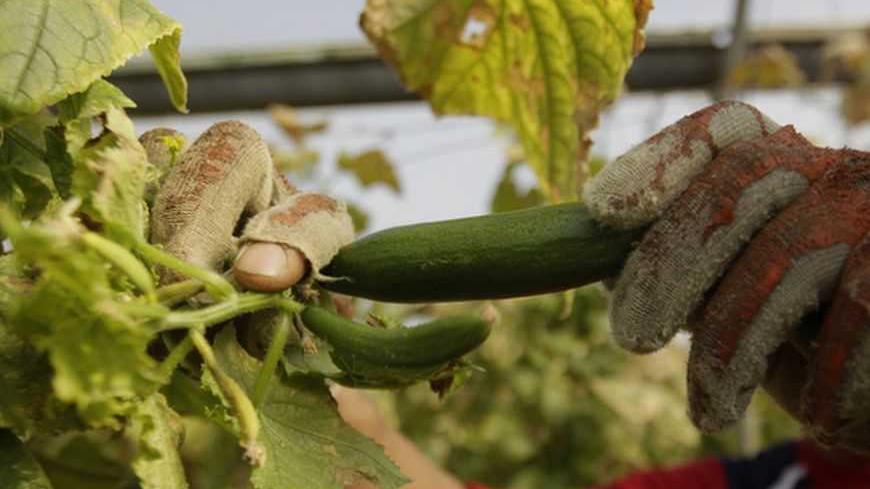 A Palestinian worker picks cucumbers growing in a greenhouse to be sold in a local market in the West bank city of Jenin March 6, 2012. - REUTERS/Ammar Awad

Rows of nondescript houses line the maze that is Dheisheh, a refugee camp of 13,500 Palestinians living in cramped dwellings. Space in this Bethlehem-area camp is a luxury as families are forced to build on top of one another, and gardens or parks are practically unheard of.

A higher cost of living — skyrocketing prices of goods and fuel — have left many struggling, including Hajar Hamdan, a 60-year-old woman living with her elderly mother, her sister and her sister’s two children. But in the past few months, a sliver of hope had arisen, courtesy of an idea that dates back to ancient Mesopotamia.

“It was an idea that I could never have thought of,” said Hamdan, whose family is one of 16 benefiting from a local program that equips them with a rooftop garden. “So far, I have saved a little by growing green beans, cucumber, peppers, spinach and zucchini.”

The idea of rooftop gardening started with Karama, a camp-based non-governmental organization that focuses on women and youth. So far, 15 homes in Dheisheh and one in the nearby Aida camp have been fitted with these gardens — simple fixtures made out of rows of open pipes filled with soil, fitted with an irrigation system and covered by a large net to provide some shade to the plants.

Luay Abdalghafar, the greenhouse project manager at Karama (meaning "dignity" in Arabic), said that high unemployment and poverty were “the necessities that led to the birth of this invention.”

“We’re refugees, originally farmers, still connected to the land, plus we have a very difficult economic situation,” Abdalghafar said. “The refugee camps especially are one of the poorest areas in Palestine. All that led us to think about a project wherein people can reply on themselves, not on aid, which is conditional.”

In addition to helping alleviate poverty, Abdalghafar said urban gardening is also a way for Palestinians to reconnect with their land, which they were torn from during the 1948 war. “Since we aren’t able to farm on our own land, we can do that here,” agreed Hamdan, referring to her ancestral land in Zakariya, a village near al-Lid, from which most Palestinians living in Dheisheh hail.

The Dheisheh camp was established after the 1948 on less than a square kilometer of space. And although the United Nations Relief and Works Agency (UNRWA) says it is home to 13,500, Karama puts the number at 15,000. At times, there’s barely an inch separating the camp’s homes and buildings from one another, and not a single wall is spared from stencils, graffiti or posters of martyrs. Stray cats run freely through the narrow streets and garbage peppers the alleyways.

Hamdan, who works as a cook in a restaurant in nearby Beit Jala, said in addition to the obvious economic benefits, her small garden provides vegetables that are devoid of chemicals and additives. “My wish was to plant and eat organic, and now I got my chance. But I’m also grateful I’m able to save money on the vegetables I grow,” she said.

Hamdan said that the economic situation has hit her family so hard, she is unable to afford some basic goods at times. She makes 1,500 shekels a month ($400), a third of which goes toward groceries and up to 120 shekels for her elderly mother’s medical supplies, in addition to providing for her sister and her two nieces.

For months, tensions flared in the West Bank after prices of basic commodities and fuel increased, and the Palestinian Authority (PA), the largest provider of jobs here, suffered from budgetary shortages because of a decrease in foreign aid, causing delays in payment to employees.

“The PA's financial problems have affected the camp like other places, but here, people don’t have other resources. They have no place to grow plants or to herd animals,” Abdalghafar said. “We are trying to help families develop and be independent of the aid system nestled in Palestine.”

Money for the project’s launch first came from the organization itself and a donation from a Palestinian-American woman. Volunteer work is key to Karama’s success, as workers offer their services for free and only get paid when money is available. Each greenhouse costs between $800 and $900, but after the overwhelming success of the project, the houses are being remodelled to provide more protection to the plants during inclement weather. This means each will now cost approximately $1,200.

Karama has ensured that everything related to the project is provided so residents can enjoy the full benefits of having a garden on their roof. The project pays for the installation, water system and tank and even the soil and seeds. Moreover, they have an technical assistant on hand for residents facing problems with their gardens and who can also routinely check the plants for diseases.

When Karama first approached some residents with the idea of rooftop micro-farms, they were skeptical. “Many were afraid that the soil would ruin their homes, especially because the houses are so old,” Abdalghafar said. “But when they saw that our design included an elevated form of gardening, they began to warm up to the idea. Neighbors then started to talk and the idea grew more popular.”

Less than a year on, the skepticism has been replaced with praise, and the project is attracting larger organizations wishing to partake in its success. Karama is accordingly expanding this urban-agriculture initiative by partnering with UNRWA, which so far has provided a 10-day training session for the residents. Because of this newly-forged partnership, Karama will now be able to afford 100 greenhouses in the Dheisheh and Aida camps.

The next design for the greenhouses, which will include replacing the agro-shade nets with more durable plastic sheeting, is being implemented by five agricultural engineers from the PA Ministry of Agriculture, Karama and UNRWA. There are plans to also put together a cooperative wherein each family in the camp specializes in growing a certain vegetable.

Abdalghafar said, “Our life is conditional upon agreements like the Oslo Accords and the Paris Protocol, and tied to the dictates of the US, EU and the Arabs. This is one of the few remaining things we can do on our own and be proud of.”

Dalia Hatuqa is a contributing writer for Al-Monitor's Palestine Pulse. A print and broadcast journalist specializing in the Middle East, she is based in the West Bank city of Ramallah and writes for several publications about politics, the economy, culture, art and design. She regularly contributes to Al Jazeera's English website, The National (UAE), and Brownbook and Masquerade magazines. On Twitter: @daliahatuqa.