The cultivation of medicinal herbs in Palestine has been growing over the past decade in an industry that benefits from the experience of Palestinian former workers in Israeli settlements. 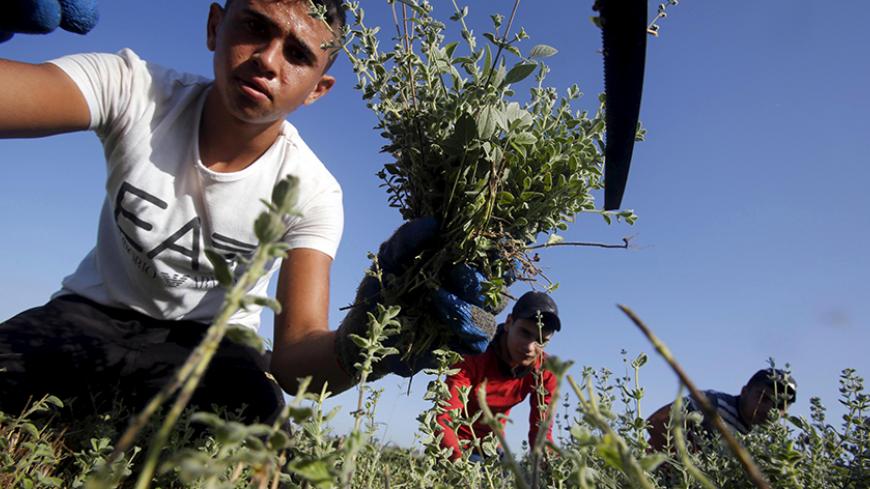 In the West Bank village of Falamyeh near Qalqilya, Palestinian farmers use scythes to pick thyme plants to be sold in markets in the West Bank and Arab countries, Sept. 17, 2015. - REUTERS/Abed Omar Qusini

RAMALLAH, West Bank — Cultivating medicinal herbs is one of the most promising and productive agricultural sectors in Palestine. Palestinian medicinal plants reached global markets after almost 10 years of work that started on May 3, 2007. In cooperation with al-Khaizaran Company for Agricultural Products, the US Agency for International Development (USAID) had launched the greenhouse project for medicinal herbs in Ras al-Fara, northeast of Nablus, north of the West Bank, as part of the Palestinian Agriculture Rehabilitation Activity. With that, the cultivation of medicinal herbs for export began and continues to grow.

On Oct. 30, Prime Minister Rami Hamdallah opened the Agripal Garden for Fresh Herbs where medicinal herbs like coriander, parsley and sweet basil are grown and exported. The garden is located in the northern al-Aghwar area, on the eastern side of the West Bank on the Jordanian border.

The herbs are cultivated on 1,200 dunams (297 acres) in the West Bank. The total production capacity is estimated at 2,500 tons per year and is worth $20 million, Mohammad al-Lahham, the director of the Vegetables Department at the Ministry of Agriculture, told Al-Monitor. Lahham said these products are way too expensive to be sold in the local market, explaining that 95% of it is “exported to the United States and Europe due to the high cost of production.”

Two key factors have contributed to the success of medicinal herb cultivation: cooperation with and funding from international organizations like USAID and participation in international expositions. Both helped enable Palestinian workers who worked in Israeli settlements to be lured over to Palestinian companies.

Tarek Abu Khaizaran, the director of Agripal Garden and Factory, told Al-Monitor, “The field of medicinal herbs started in Palestine 10 years ago, and it benefitted from the experience of Palestinian settlement workers after they were hired by Palestinian plants and farms.”

Abu Khaizaran noted that Agripal Garden and Factory has hired 100 workers who were employed in Israeli settlements to benefit from their practical experience in machinery, agriculture and packaging. Specialists also came on with their expertise in the type and quality of plants, he said, and Palestinian companies are offering competitive salaries and work environments that encourage workers to quit their jobs in the settlements.

The Palestinian Central Bureau of Statistics data published on Aug. 8 showed that 22,000 Palestinian employees worked in Israeli settlements during the first quarter of 2016, and this figure dropped to about 19,000 during the second quarter.

President Mahmoud Abbas issued a decree on April 26, 2010, banning the sale of settlement products in the West Bank and the Gaza Strip. The decree bans any technical, material or artisanal act that would benefit the settlements financially. But the Palestinian government’s inability to provide thousands of alternative job opportunities for settlement workers has led it to forego prosecution and restrict itself to a ban on settlement products.

Moussa Daraghma established the Jannat Adan for Medicinal Herbs Company in Tayasir village in Tubas province 10 years ago, after two decades of working in Israeli settlements. He told Al-Monitor, “After having worked in the settlements for 20 years, I gained comprehensive experience about planting medicinal herbs and exporting them. So I established my own factory to compete with Israel’s.”

Daraghma’s project employs 400 Palestinians who worked in settlements. He exports 700 tons of medicinal herbs per year. He noted that he exports 22 kinds of medicinal herbs, mainly sage, mint, coriander, local thyme and wild thyme to the United States and Europe. He markets his products at international expos in Germany, Russia and Georgia. He is planning to invest in herb farming in six new areas in the West Bank in the next five years.

Daraghma asserted that planting herbs is potentially a strategic field for the national economy, though it does not receive the subsidies it needs from the Ministry of Agriculture or the Ministry of Local Economy, even though the National Strategy for Export 2014-2018, prepared by the Palestinian Ministry of Economy and the Palestine Trade Center, prioritized the medicinal herb sector.

Palestinians are often compelled to work in settlements due to the lack of job opportunities in the West Bank. But if there is a viable alternative, they are happy to change jobs. Fatima al-Nabrisi, who has been working in Jannat Adan for Medicinal Herbs Company for six years after having worked in al-Hamra settlement in al-Aghwar for a year, told Al-Monitor, “Working in the West Bank is psychologically and socially comfortable, and it beats working in settlements. Financially, it is the same income.”

Nabrisi, who supports her parents and her brother’s two children, works in packaging and processing herbs and managing 12 workers. She said, “My work shift in the settlements started at 7 in the morning. I would leave my house at 4 in the morning and wait at al-Hamra checkpoint in Tubas for hours. The shift ended at 2 p.m. and I would arrive home at 5 p.m., even though I live nearby.”

She added, “Working in the settlements is risky, because we are always afraid of settler attacks while heading to work or returning home. The work environment is not comfortable, and bosses or employment agencies can easily dupe employees on salaries.”